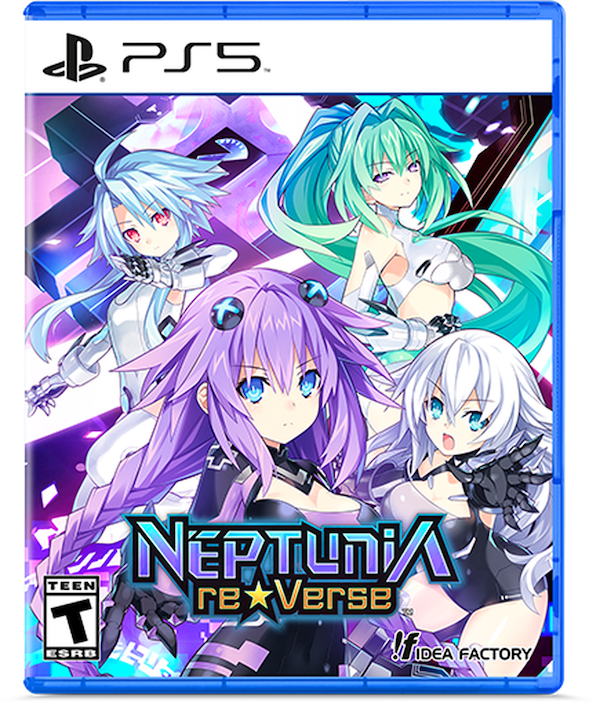 Hyperdimension Neptunia is a great example of a lot of things, like the value of remakes, the importance of giving a series a chance and learning from your mistakes. The original game was a rather novel concept. It was sold as a meta heavy love letter to the game industry that had some commentary about issues like piracy. Where it fell short was execution. It was a mess that wasn’t just unenjoyable to play, without the references it offered nothing. This made Hyperdimension Neptunia Re;Birth 1 so welcome. Instead of just porting the game, a new game was built around the stuff that worked, which was better received. Neptunia ReVerse brings the title back for players to enjoy on a new platform, but is it worth revisiting?

Since Neptunia ReVerse is an enhanced port of a remake of the first game, it might surprise a number of fans. Instead of being a silly game where each character does their signature joke, Neptunia ReVerse had the four goddesses at odds. Through this adventure the characters will grow more friendly, Neptune will discover things like a love of pudding, though it isn’t so off the way Neptune becomes a motorcycle. This can make it hard for fans of the later games, though it still tries to stand out in its own way.

Those familiar with the more recent Neptunia titles should have a pretty good idea how Neptunia ReVerse plays. There is a home screen that has key locations, dungeons and optional chats. Key locations include things like a shop, dungeons lead to gameplay and chats give jokes, unlocks, free items and more. Gameplay is pretty straightforward as well. After entering a dungeon, enemies will be wondering around, with collectibles, hidden things and more. Enemies can be engaged, with an early attack giving you an advantage, though missing will result in enemies having an advantage.

Most fights come down to positioning and tactics. Since characters can move anywhere within their circle, positioning their area of attack, represented by a box, is extremely important. Certain weapons, characters and positions allow characters to maximize damage. It’s possible to go from attacking a single foe to showing five or more enemies who the boss is. However, like most Neptunia games, this is about all you need for tactics.

Even though there are debuffs, certain attacks do more damage than others and a whole system devoted to making certain attacks better than others, there is no situation where doing the same attack as many times as possible isn’t best. Over time new skills will unlock and you’ll need to change up the attack order but it’s very much so an adventure where you can make cross the best chain and press that endlessly after getting to the right spot.

In some ways this problem is both helped and hurt by Neptunia ReVerse’s arrange mode. Instead of playing the game normally, where you slowly meet new characters and there are conditions to unlock them, arrange simply unlocks them all. It’s a little underwhelming that it gives players a massive advantage up front, especially since you’ll have four characters to start instead of two, though great for anyone just looking to enjoy the ride. There isn’t enough tactics to make Vert’s already long strikes game breaking, nor will it destroy the experience having every possible option, just something to consider.

There is also a fishing mode that takes advantage of the DualSense. It’s a cute mode that really highlights the features value. Even situations like that benefit from small changes that increase immersion. The mode itself is also an absolute delight. With fish containing references, along with gear and other fun things, it can keep players interested even if it isn’t that complicated. It also contains dialogue sections from the original version of the game. These offer a fun window into the past to see just how far even the first remake came.

Where Neptunia ReVerse falls short is ultimately polish. Some of the cutscenes are simply jarring. The main character models, backgrounds and talking portions look nice visually. During the first cutscene, where there are some flashes of in-game combat, it looks every bit of a low budget PlayStation Vita title. These really stand out, with similar things happening during the gameplay section.

Icons and text look crisp and clear, with models being hit and miss. It’s clear the main characters and enemies were brought forward. This is extremely notable with there being interesting changes to the iconic Dogoo enemy. Previous titles colored the Dogoo has a solid blue droplet with a cute muzzle and ears. It was always a very obvious reference to the iconic slime enemy from Dragon Quest, which has remained this way even in Dragon Quest XI.  In Neptunia ReVerse, the enemy is moves from blue to more of a turquoise, with a jelly like texture and reflective look. The enemy in question can also be seen below.

It’s little changes like this that take away from the experience. Similar things can be said about the improved character models. Neptune, Compa and the rest have look visually nice and crisp, though they have a very saturated color. Given I game on a Sony OLED, a display known for contrast and accuracy, I can only imagine how much more pronounced it will look on a more traditional set.

Upon closer examination of the details, this is also where budget unfortunately starts to come into play. Enemies, characters and UI were all improved, though the in-game backgrounds feel dated and out of place. Detailed characters standing on pixelated dirt and grass just take away from the experience as a whole. It makes sense there wasn’t enough time or need to recreate everything to even vaguely capture PlayStation 5’s potential, though these little quirks stand out when it’s so common.

In reality, Neptunia ReVerse does what it ultimately needs to accomplish. The things that matter look nice, new modes give most players something to look forward to and it’s an experience a lot of players likely never got to see. It would be nice if we saw some more improvements, or at least not making changes we didn’t need, but it retains the original spirit. Arranged mode makes it super easy for newcomers or returning fans to get some into the fun, with fishing adding a lot of excitement. So if you want to finally play the first game or just revisit it, you should be satisfied with Neptunia ReVerse.

[Editor’s Note: Neptunia ReVerse was reviewed on PlayStation 5 and a copy was provided for review purposes.]