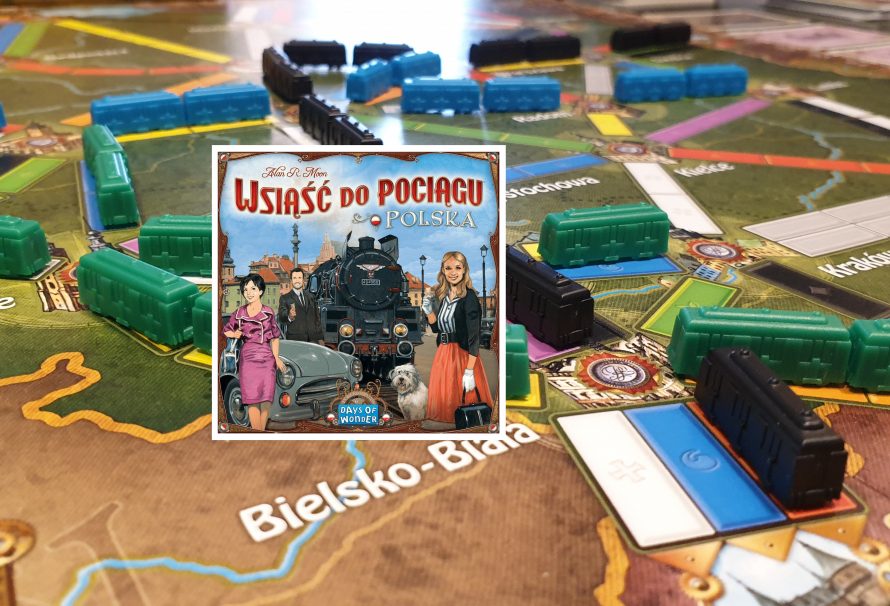 Ticket To Ride Poland: Map Collection 6.5 is the brand new expansion from Polish publisher Rebel alongside Days of Wonder. Squeezing in as a half numbered map pack before Japan & Italy, this was somewhat of a secret Essen Spiel 2019 release. Coming with English and Polish rules this expansion requires either Ticket to Ride or Ticket to Ride Europe and is designed for 2 – 4 players. Taking around 45 minutes to play, routes will be claimed, cards played and countries linked. However, is this an expansion fans of the series should own? Let’s find out!

Note: This review assumes you are aware of the core gameplay of Ticket To Ride. If you’re not, check out our review of Ticket to Ride here.

The first alteration from the norm is that only 35 trains are used by each player on the Poland map. The board is appropriately smaller, being square in shape and made up of 4 rather than 6 panels. The addition to the basic experience are nation cards. These nation cards are split out by country into different piles, and put into descending order points wise. Otherwise, the game is set up as normal; with players getting some starting train cards and destination ticket objectives.

Claiming routes, and completing destination tickets, is still the aim – with most points still earnt by these means. Whilst not included on destination tickets, linking countries can also score players points. With 20 nation cards to be claimed, and 7 countries to be linked, there is occasionally an additional step when claiming routes. Whenever a player builds a route that connects two or more countries they claim the top nation cards of the respective countries. Nation cards score their denoted points at the end of the game, with cards earnt always visible to other players.

As with the destination tickets it matters not the route between the two countries, only that there is a continuous link between them. Even if a player has previously earnt a card from a country it doesn’t stop them claiming another, by linking up to a third country and beyond. The different countries have differing numbers of cards, causing somewhat of a race to earn them. For example, the link to the Czech Republic has 4 cards, while there is only one for Lithuania. They aren’t all equal either with Lithuania’s only worth 3 points while Russia’s first is worth 7.

Just like with overlapping destination tickets, it is possible to get lucky with a destination ticket that overlaps with the majority of a route between two countries. Ticket to Ride isn’t a highly strategic game and the Poland map doesn’t change this. If you can accept losing to this in the base game you’ll have no problem, it just doesn’t do anything to help improve matters of luck.

Knowing the geography of another country is not easy for everyone, and this is only made harder by the map utilizing the Polish names of the cities. For some of the other map collections I have found this to be a real struggle at times, when it comes to the destination tickets. In Poland however this hasn’t been the case. There are two potential reasons for this. None of the city names are overly similar, meaning it is harder to mix two up. Also, as the expansion is relatively easy to play, players can concentrate that little bit more on finding the correct cities and not remembering the new rules.

Often expansions will be more complicated than the base game. While minutely more complex than Ticket to Ride, the gameplay of Ticket To Ride Poland is simpler than Europe – as it doesn’t have stations, nor does it include tunnel or ferry routes. Putting the naming of the cities aside this allows it to be very much a family weight experience. Plus it helps get the game to the table that bit easier.

Having countries to link to gives the experience that bit of flair that Ticket to Ride Poland needs as an expansion. Plenty of points are up for grabs but by no means do the country points equal victory. In games where one player has scored over 35 points from linking countries another earnt enough via destination tickets to win (another grand plan out the window). Nation cards therefore feel balanced from this point of view, while always being a tantalizing option to go for. One nice feature production wise, which hits the standard expected by the series, is the links to the countries use routes that match the colours in the respective country flags.

Not being a fully fledged map pack there is one thing missing. The board is only of Poland, with no second map on the reverse. As fun as it is to play the Poland map, part of the map collections is the ability to get two experiences in one purchase. This won’t matter to those from the country, but for those of us that enjoy the variety slightly less is added compared to normal.

Overall, Ticket To Ride Poland offers a new experience for fans of the series. The Ticket to Ride core gameplay is here in all its glory, with a minor addition rather than tweaks. Previously, countries have been linked to as part of destination tickets. Yet, scoring via nation cards is a nice twist. Standing up against a full map collection is hard, with only one board – though there are times when one map of a collection is hardly touched. It doesn’t have a wow factor, like the bullet trains in the Japan & Italy collection. Nevertheless, Ticket To Ride Poland does provide a relaxing, family weight experience – which is ideal for current times.

(Editor’s Note: Ticket To Ride Poland was provided to us by Asmodee for the review. The game is currently available from local board game stores, find your local store here.)