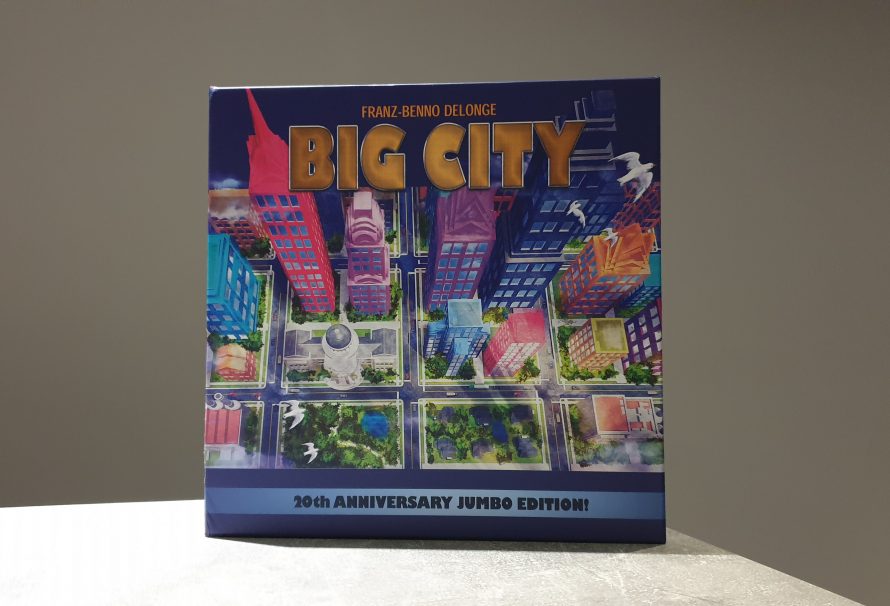 Big City: 20th Anniversary Jumbo Edition released at the end of 2019 after a successful Kickstarter campaign by Mercury Games. Designed by Franz-Benno Delonge, Big City is an hour long city building game for 2 – 4 players. Featuring artwork from Michael Christopher, Paola Tuazon and Andrew White, the game utilizes a modular board and hand management mechanics. Back with this special edition the buildings are 33% larger than in the original. However, is bigger better? Let’s find out!

Starting out players build the first neighbourhoods of a small town that’ll grow into a, wait for it, Big City. The city is to be made up of numbered plots, on neighbourhood boards. With the 10s board placed in the center of the table each player, in turn order, adds the next numbered board. For example, in a two player game one player will add the 20s board, with their opponent adding the 30s board. When joining neighbourhoods at least two of the square numbered plots must be orthogonal to those of the already existing city boards, though the orientation of the boards does not matter. The cards of all of the numbered plots are shuffled in their respective sets, with each player taking 1 card from the 10 – 50 piles.

At the start of a turn players will discard any useless cards – cards where the number shown is covered. Then, on a turn players can perform one of six actions, though initially half of these are locked. Players can take the basic build action by spending a card to build a 1×1 residence or business on a plot of land. This action also allows the player to spend multiple cards of orthogonal spaces to purchase a 2×1 or 3×1 residence or business.

For these basic buildings they score based on their size with bonuses. These bonuses are for being on the outskirts or in the city centre for residences and businesses respectively and if adjacent to a park. Points can then be doubled if adjacent to a streetcar – though at the start there won’t be any of these in play.

A somewhat underused action is the second available at the offset of the game. Players can choose to discard as many cards from their hand as they wish. These cards are placed at the bottom of their respective piles. The player then draws up to a hand of five cards, taking a maximum of two cards from any one card pile. Used at the right time, players can use this to increase their chances of getting specific numbered cards.

The third action a player can take is to build the city hall. This triggers the second stage of the game – unlocking the other actions. Each round, up to a value of 5 points, the city hall increases in point value for whoever builds it. To do so a property card of a numbered space must be spent, with the points then earnt. The city hall can only be built on city center spaces, spaces not orthogonal to the edge. Therefore, it is possible for the game to end with the city hall unbuilt.

Once the city hall is in play advanced buildings, street cars and more neighbourhoods become available. Advanced buildings come in two forms: card based or with requirements. Parks and factories are played by spending specific cards denoting them. These can be placed anywhere plot wise, making some numbered cards useless. Parks are great to build next to as they give bonus points, while factories reduce the score earnt when building adjacent to them.

The other advanced building action sees the likes of malls, post offices and banks added to the city – again via spending property cards. These come with requirements such as requiring adjacent residencies, businesses or both – though can score all the way up to 30 points! The mall even requires a street car, which can be placed as an action after the city hall is built. Whoever takes this action first places one street car on any road in the city. When the action is taken after this the player adds two street cars onto one end of the route – with splitting the street car route not allowed.

By the time the city hall is built often a good chunk of the starting boards are full. To get around this a player can choose to add one of the remaining boards into play. Following the same restrictions as setup, any of the boards can be added. For example, this means that a player can slowly build up a hand of 80s cards and add the 80 board into play before the 50s board is in play. The final action available is to pass. If all players choose to pass or discard in a row the game ends, so it is possible for not all neighbourhood boards to be added into play.

After performing an action players get to draw back up to five cards. Though, unlike the discard action, only 1 card can be taken from each pile. Once everyone has had a turn a redevelopment phase commences. Starting with the player in the lead, each player plays 1 or 2 cards from their hand face up or face down on the table. In reverse score order players with face up cards then can choose 1 or 2 cards from the other players, depending on how many they played. This is then replicated by those that played their cards face down. Players are unable to take their own cards unless forced to – causing some movement of the property cards. The game continues with the starting player moving clockwise. When the game ends via everyone passing, or all buildings that can be placed are, whomever has the most points wins.

The redevelopment phase does take some getting used to, mostly with players confusing the order to play or take cards in. Somewhat unintuitive, the lack of a thematic reasoning for this phase makes it harder to pick up for some. Regardless, this phase is what completes the experience. Players can attempt to bluff bad or useless cards onto others, then there is the choice of playing face up to go earlier. It means that players’ hands don’t become stale and just adds that something extra, and special, to the otherwise simple gameplay. It even works in a 2 player game, though it feels more cutthroat, with it being as much about passing information as it is passing cards.

During the first play of Big City: 20th Anniversary Jumbo Edition the reference sheets are a game saver. Containing everything from possible actions to requirements and points scored for special buildings it is all to hand. Certainly when starting out the scoring can daunt some players, but before long everyone’s minds are at ease. Each building is listed on the reference sheet and the points scored often boils down to a basic value that can have bonuses based on placement. The maths certainly isn’t as complicated as it looks, allowing the game to be enjoyed by a wider range of players than the game initially portrays.

Big City: 20th Anniversary Jumbo Edition is one of those games that has table presence from setup through to the final turn. Starting out all of the buildings are lined up, waiting to be built, crying out for players to pick them up and enjoy the building designs and details. From the little trees of the parks to the cars parked outside the residences, the little details are epic. At the end of the game there is a city, which has dynamically grown, in front of players. People stop and look and it is hard not to lean forward and peer down the created streets as if on some kind of board game Google Maps.

Alas, all of this comes at a cost. Price point isn’t something that is often brought up in these reviews. With different gamers having different budgets it is hard to say what is worth the price for one person will not be extortionate for another. Nevertheless, based upon RRP there is no denying that Big City: 20th Anniversary Jumbo Edition is on the upper end of the price scale. Comparing the amount of game in the box to something only a few pounds more such as Gloomhaven or even the cheaper Zombicide games there does seem to be less game for your buck. The gameplay experience feels akin to the likes of Suburbia, rather than one of these larger sized titles.

Putting the cost aside, there is more than just a solid game in Big City. Perceived difficulties melt away quickly, allowing for the simple choice filled gameplay to shine through. Mercury Games has helped this with the reference cards, a great decision on their part to make the initial play so much smoother. The new aspect of this anniversary edition is the redevelopment phase. Without this hoarding an awesome hand would be possible and the interactivity of the game would suffer, making it a welcome addition. Big City: 20th Anniversary Jumbo Edition is a joy to play, not just for the beautiful city that is created but the simple hand management gameplay that leads to it.

(Editor’s Note: Big City: 20th Anniversary Jumbo Edition was provided to us by Asmodee for the review. The game is currently available from local board game stores, find your local store here.)