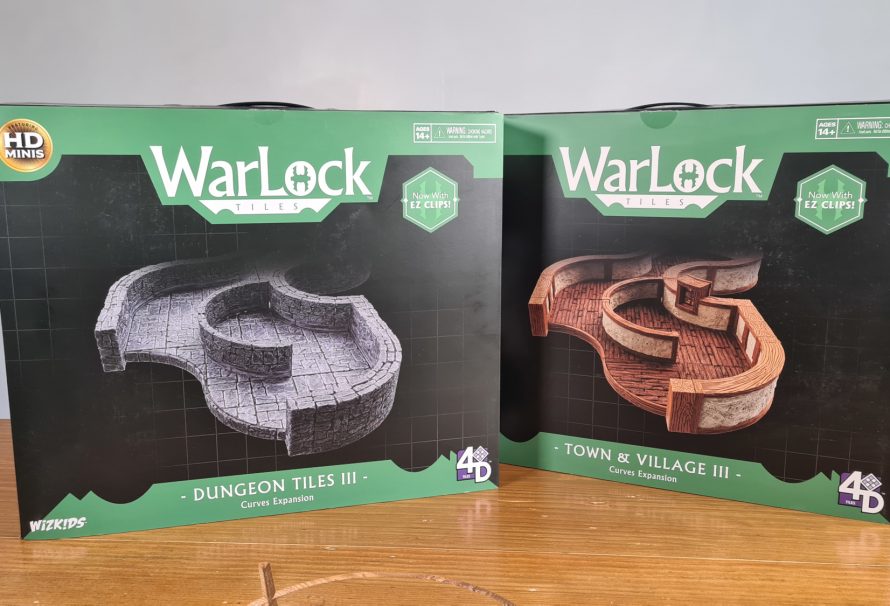 The initial WarLock Tiles sets featured straight 2 inch wide walls and tiles. Now, WizKids has released WarLock Tiles III – Curves. Coming in the two styles, Town & Village and Dungeon, these break away from the standard straight edges and right angled geometry, adding curves into the mix. Alongside this release there are also Angles, which we will be separately reviewing, so keep an eye out for that. However, do the curves add to the dungeon building process or will it just have you going round in circles? Let’s find out!

Using the new colour scheme system WizKids is marketing the WarLock Tiles III Curves sets as expansions. This is rather important as while there are a lot of tiles in the boxes, neither the Dungeon Tiles Curves set nor the Town & Village Curves set come with any standard straight walls or the regular tiles. Therefore, dungeon masters are unlikely to be crafting builds with just the tiles included in these sets – to the extent the build featured on the front of both sets isn’t possible without owning a core Dungeon Tiles and/or Town & Village Set I.

As with the base sets, Curves feature the same double sided tiles, with wooden planks on one side and a stone floor on the other, all in their pre-painted glory. Instead of having 2” by 2” tiles though, the Curves set splits the tiles into 2” by 2” Outside and Inside curved tiles. A pair of these outside and inside curved tiles can be clipped together to create a standard tile in size and shape.

To go with these curved tiles are of course wall pieces, in the half height style: akin to the WarLock Tiles Set I range where the walls are 1 inch tall. To go with the outside and inside curve tiles are Exterior Outside and Inside walls, clipping to the tiles in a way they sit outside of the standard tile space or within it respectively. As with the standard wall tiles these have room for pillars to be added on the end, though no additional pillars are included in the expansions. Both sets also include curved interior walls, which slot into the curved groove of an outside and inside tile when clipped together.

There is a slight disparity between the Dungeon Tiles and Town & Village Curves sets. Like with the base sets the Town & Village set comes with some windowed walls, and this variety comes at the cost of a few floor tiles. Annoyingly, neither set has any kind of doorway – no external nor internal wall pieces feature doors. This limits the set much more than you would first think. While a room can be made a perfect circle using four outside curved tiles and walls, it then isn’t possible to enter it unless it’s got a trapdoor or a staircase. This works for the upper parts of a tower but the base layer will need some straight walls to enable player characters to enter.

Many WarLock Tiles users, like myself, like to construct a room with all of the wooden planks of the tiles in the same direction. This isn’t possible half of the time when utilizing the curves set, with every curved tile piece featuring the same direction of wooden boards. This simply doesn’t allow you to have the planks in the same direction with two curved pieces, either both inside or outside, adjacent to each other. Frustratingly, they don’t even align when clipping inside and outside curve tiles together. This isn’t an issue, or at least isn’t noticeable, when utilizing the stone floor side of the tiles though.

The large outside curved pieces can be clipped on all three sides, like the triangles from the Angles set. The same cannot be said for the smaller inside curves though, with the non-curved edges completely filled in. Whilst there wouldn’t be the room for the three clip positions a normal tile has, it’s disappointing that there is no way to connect them. Part of the appeal of the WarLock Tiles range is the fact all of the tiles normally lock together, so much so lock is literally in the product name. Due to the way these smaller inside curved tiles and their walls are used when building they do slot into a gap – so they aren’t completely loose. Nevertheless, it can make building a room and having it off to one side ahead of time a touch more awkward.

Another odd decision for the Curves set is the grid is lost on the Wooden side. Whilst there is still a visible 1 inch grid on the stone side of the tiles, for both curved tile pieces the wooden side is just the floorboard/plank style design, as if they are treated as 1 space. This doesn’t stand out hugely in a build, and for the most part the other spaces would be small slithers, it just doesn’t match the other WarLock Tiles.

The WarLock Tiles Set III Curves expansions have flaws. Not including doors is perhaps the biggest for using them in builds, though losing the one inch grid on the wooden tiles seems a strange choice. Regardless, being able to break away from the slightly ridgid right angles of the base sets adds a lot of realism to builds. All of a sudden dungeons can have wiggling routes, taverns can have curved alcoves and castles can have circle shaped turrets. The build potential with curves opens things up more so than the Expansion 1 box, from the original range. Overall, they are another solid WarLock Tiles release that can allow dungeon master’s minds to run free when designing locations for their players!

(Editor’s Note: The WarLock Tiles Set III Curves expansions were provided to us by Asmodee for the review. The expansion sets are currently available from local board game stores! Find your local store here.)