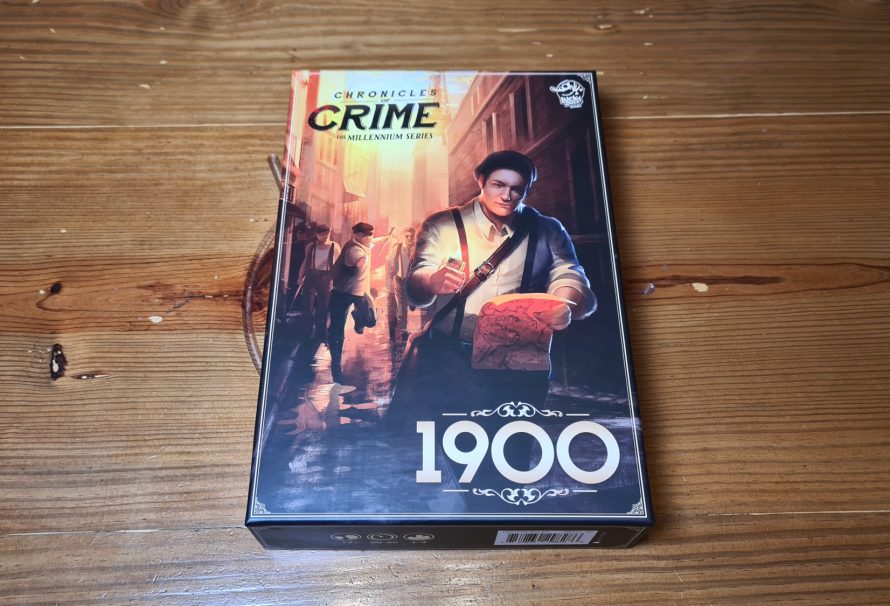 Chronicles of Crime 1900 is the brand new cooperative crime investigation board game from publisher Lucky Duck Games. Designed by David Cicurel and Wojciech Grajkowski, this is a standalone game and not an expansion, being part of the Chronicles of Crime “Millennium” series, which started with 1400. The game sees 1 – 4 players experience story driven cases through the eyes of Victor, a young journalist in Paris at the turn of the century. Lasting around 60 – 90 minutes, the game uses a free to download app, VR locations, QR code technology and a range of physical cards and components to bring the cases to life. However, are these crimes which players will want to solve? Let’s find out!

Editor’s Note: We were provided an early copy of Chronicles of Crime 1900, which included the tutorial and 3 out of the 4 included cases. The fourth case is available today, April 29th, marking the release of the game. To avoid spoilers for the cases all examples are either vague or taken from the tutorial.

Victor Lavel is the journalist that players act as during the game, who is looking to scoop the story for the Les Nouvelles de Paris newspaper, which he works for. As the editor finds out about potential news stories Victor is dispatched to find out more. The cases unravel as Victor starts to search locations, interrogate and ask questions of characters and solve puzzles along the way; with a spot of help from Norbert Lavel, Victor’s uncle in the police force.

Some locations will let players “search the scene”, using the app to look at a VR scene. One player uses the phone while shouting out to the others what they can see, attempting to find evidence that might be clues to the case. For example, if a player was to see what could be the murder weapon in the scene the would describe it. The other players then search the evidence category deck for an appropriate card – perhaps melee weapon, sports equipment or footprints. Scanning these evidence cards will then determine if they are useful or not, with useful ones being added to the red section of the central board.

Some evidence and characters can be mentioned but not located. In these cases the appropriate cards are put into the blue section of the central board, until they turn up later in the story. Despite players not having direct access to these cards, characters can still be asked about them this way. By talking to characters additional locations, characters and more surface. Players can continue to ask things of characters at their location or then decide to move to another. Each action costs time though, with Victor needing to get the story back to the office by midnight – with the team’s score impacted if they don’t manage the case in time. The team will also have to answer a range of questions to see how well they did with the case.

The new addition in Chronicles of Crime 1900 is a deck of puzzle cards. Unlike the rest of the cards which can be almost freely looked through, this deck instructs players not to peek ahead of time. During play the game will, as with the standard or special evidence cards, instruct the players to take one of the “?” cards from this deck – via the card number. Using the tutorial as an example, as to not spoil anything from the main cases, players receive a puzzle card with morse code written on it. At some point in the tutorial this is then used to crack a second puzzle card, with the information leading to a breakthrough in the case!

These puzzle cards have more of an escape room style vibe to them and add that extra board game element which was missing from the original. For the time spent the players are at least partially drawn away from the app. Plus, these often have a sense of satisfaction when solved, as they lead to finding out something interesting and important about the case. Some of these cards are very specific to the cases, which could limit the communities efforts to make custom cases in Chronicles of Crime 1900. Thankfully, a range of the puzzle cards are generic enough, like the aforementioned morse code card or a map, allowing them to be potentially repurposed for further cases.

Lucky Duck Games has created a brilliant learning experience for first time, and returning, players. The tutorial is built in a way that you can just set the game up and play without really needing to do more than skim the rulebook. While knowing some of the terms used can be helpful, the tutorial steps players through each aspect of the game. From the way to talk to characters to the difference between the red and blue areas on the central board, it’s all clear by the end of the tutorial – plus it has a little bit of a narrative to it.

The app is a dominant part of the experience, with someone having to scan and read from the app to advance the narrative. Putting the QR technology which powers the game aside, it is the small uses of VR that suck players into the world. Seeing the crime scene and then other locations as if you were standing there is phenomenal at getting players immersed in the story. Not every place has this VR treatment, so it isn’t overused and pops up in important locations keeping them special.

As great as the app is, for the VR locations and QR technology, there is a missing feature that would take Chronicles of Crime 1900 to the next level. If the app had voice actors reading the long passages of text it would make the experience overall that bit easier. At times players will scan cards and multiple pages of text for the character speaking will appear. As players often will be using a phone, sitting around a table, it’s not the easiest for everyone to read the screen and therefore the player holding the phone has to read outloud the passages. A narrator would just take this pressure off the players completely.

Each of the cases lasted three of us just over the hour mark, with all of the locations spread out across the table and around 10 – 15 characters dotted around. Initially the amount of characters was a bit daunting, especially as the same cards may have been a completely different character in a previous case. Keeping track of who was who required some concentration. Still, by the end of a case players were able to tell who each character card was easily. The same cannot be said for the evidence category cards. With generic words on them there were occasions of one player asking another what a card referred to. This isn’t really avoidable with the way the game is designed, as all the content is reused between cases – just don’t go into the game if you cannot give to your full attention.

Case 2, Train from the Past, and case 3, Belly of the City, are joined to some extent under the name Boulevards of Death. The game rightly suggests playing them in order as case 3 does include spoilers for case 2. While the game suggests you could play the cases with different groups it isn’t advisable – though no knowledge of one case is needed for the other. There were a few extra moments of story based excitement between the players, having played the two cases together as a group, and this would have been missed if the group changed. It is possible though, so players aren’t limited in that regard.

Physical components wise what’s included is mostly top quality. The locations all clearly depict different locations, with some well known and stunning vistas included. The character cards are mostly distinct, with the characters in their period dress, though note there is very little diversity in the deck. It would have been nice to include tokens to help players remember characters, such as a marker to indicate a dead character. It’s possible to simply put the cards on a slant, but a range of tokens for players to use might have helped that initial overload of characters.

Chronicles of Crime 1900 is another solid entry in the crime investigation series. If players don’t mind the amount the app is used, it creates an immersive story with locations literally brought to VR life. The introduction of puzzle cards is a positive step forward for the series, as they bring a slight break from the app and offer unique challenges for players to puzzle their way through. There are a few ways the game could be improved, via voice acting in the app or tokens to help players remember things. Overall though, Chronicles of Crime 1900 offers strong stories, which players will want to get to the bottom of, with a fully integrated app that helps bring the cases to life.