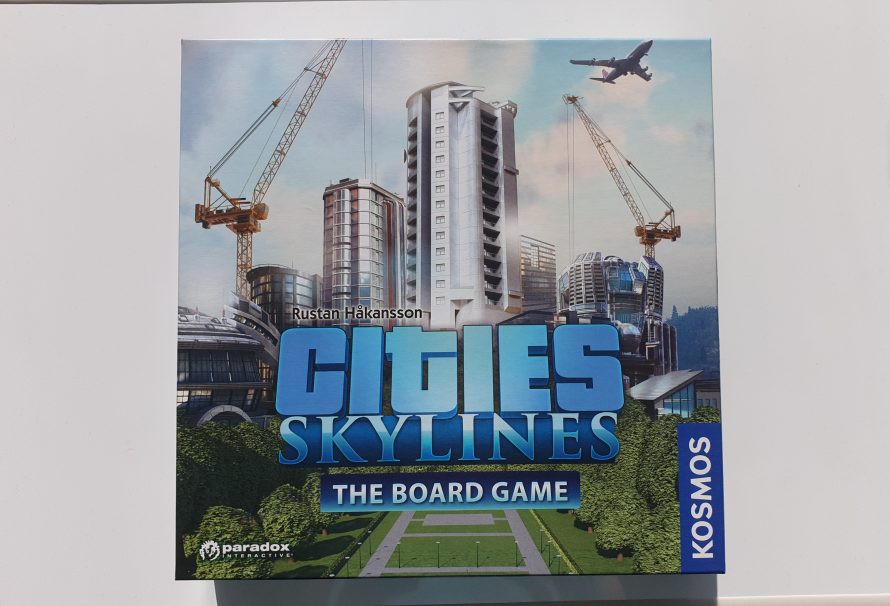 Cities Skylines The Board Game is unsurprisingly a title based upon the city building video game of the same name. Published by Kosmos, the board game is a cooperative experience, with tiles placed to create the growing city. Designed by Rustan Håkansson, the game sees 1 – 4 players using cards to build homes, utilities, services and more – all whilst trying to not bankrupt the city. Making a happy city is the aim of the game. However, will the game bring gamers happiness? Let’s find out!

Starting out players will choose which of the scenarios they wish to play, be it the introduction, those that introduce additional content or an all in scenario. These determine the map boards that are in play, as well as the pattern they make face down in the middle of the table. Some of the cards and components, such as unique buildings and roles, are only included in specific scenarios – to step players into the game. Otherwise, aside from setting the trackers on the administration board to neutral, setup is mostly about putting the components within reach and dealing out some construction cards to each player.

Unlike a lot of cooperative games, Cities Skylines is an all information on show style game. Rather than holding a hand of construction cards, players place their cards face up in front of themselves for all to see. More importantly, players are always able to discuss. On a player’s turn they must perform 1 of 3 actions. The first is the most common, playing a construction card. This will see one of the many polyomino pieces, which come in various types (colours) or with utility/service symbols, placed onto the board. Built in roaded districts, tiles must fit within a single district and cannot overlap or move previously placed tiles.

Each card lists the costs and the rewards for building it, though costs aren’t always money. For example, the cost of an industrial building could be increased traffic and pollution – which are tracked on the admin board. That industrial building could provide jobs, decreasing the labour force, or perhaps if built in the same district as two commercial tiles would boost revenue, giving the city’s treasury some much needed extra money. Once this is done the player draws a new card from any of the construction level decks. Where level 1 cards are the cheapest, level 3 cards are the most rewarding.

Ending a milestone is when all of the decisions will either result in banking some city happiness or they’ll come back to haunt players. For the top tracks on the admin board, trash capacity and such, for each step below zero on the tracker then the happiness tracker is reduced by 1. Then, the current happiness is transferred over to the Skyline display. Importantly, if the tracker ever hits -5 or the overall happiness on the Skyline tracker reaches -10 then the game is lost. The team must then pay for each step the population is above or below the zero mark – seeing them paying unemployment benefits or paying to bring in workers for jobs. The bottom trackers of pollution, traffic and crime don’t impact anything during these milestones – though can stop construction cards being played. Finally, the team must pay for a new map tile, that’s adjacent to one already in use – flipping it face up.

If at any point the city is bankrupted, when money must be spent but the treasury cannot afford it, the game is lost. This can occur during the milestone section or when a player is unable to perform any of the actions. When this happens the city isn’t finished and the game is instantly over. If players manage to hit all of the milestones though then, after reducing happiness for the city capacity trackers, the city’s overall happiness is revealed. There is a table on the back of the rulebook that can be compared to, ranging from a dying city to a heavenly one – to see how well the players did.

Scenarios 1 – 4 are effectively a tutorial system slowly adding in additional content, though not all of that content makes the game harder. Still, a bit like the video game players are dropped in the deep end. Starting without the news cards does make the experience easier, though the role cards often make things easier by reducing costs. Regardless, players are always at the mercy of a depleted treasury. By playing the game through players will gain the knowledge of how to improve for the next playthrough, with this process taking a few games. This is more about learning when to splash out for a building or quickly advance to the next milestone.

There are turn overview cards, listing the available actions players can take. These do smooth the process of the first turns a player takes, as they know what they can do. Knowing if something is the right move though is picked up as part of the learning curve. We managed a glorious zero points in our first game, and were still pretty pleased with that result! For learning the rulebook runs through everything logically. Oddly, one example has the wrong card image next to it. Thankfully, it is 1 of 7 on the page, so it shouldn’t be a problem.

Once everything is mixed into the construction decks, there is an odd mix of symbol focused and word heavy cards. Both styles get the message across, and it would have been tricky to turn the sentence long cards into symbols: there is just a slight lack of consistency. Despite this, it is the construction decks that instill a lot of the replayability into the game, with how things come out of the deck driving the puzzle. The map tiles also add to the variety, with 6 included but a maximum of 4 normally utilized in a game. Increasing this, once past the learning scenarios, there are different patterns of map tiles, so not every city is a large square.

Writing that the game comes in two stages playing and scoring might not sound like a game changing thing. There is however an excitement in the first stage that is lacking from the latter. Building out the city, the choices of placement are always interesting. This only increases when players start to know what could come out of the construction decks. Pulling off combos between players and building something to line another player up for a bonus reward feels amazing. With only four 5 valued money tokens included this should be an indication at quite how tight money normally is, and working within the constraints makes the puzzle tick. However, there is something lacklustre about the ending when it comes down to looking up a table to see how well the team did. It’s a little uninspiring. Some kind of city objectives may have been an interesting alternative, to make you want to play again and not just to beat a score.

For a game with many tiles and tokens storage is somewhat important, not just to stop the game banging around in the box but also to help speed up setup. Cities Skylines doesn’t have an insert of any kind, though there are a decent amount of plastic baggies included to solve the problem. There are enough included to have each colour of building tile in its own bag, the money and tracker tokens in their own bags, even for the decks. Many games fail to provide any, or just enough to cram half of the components together in a bag. Cities Skyline therefore should be praised for providing ample bags, as it cuts setup time dramatically.

There is a great puzzle in Cities Skylines, that does a great job of mimicking aspects of the video game. Players will constantly have to balance a range of effects. No building is ever completely positive – fixing one problem while pushing another resource down or chipping away at the city’s funds. The happiness points lookup table is something many cooperative games rely on, so it cannot be condemned for it. It does allow players scores to beat when replaying. Most importantly, players will want to replay. When a game is over you’ll all sit there discussing what you could have done better, what was the downfall and then want to try again. Thanks to the variety on offer, Cities Skylines is a game that can keep hitting the table and feel fresh time and time again.

(Editor’s Note: Cities Skylines was provided to us by the publisher for the review. The board game is based upon the popular video game, also called Cities Skylines.)