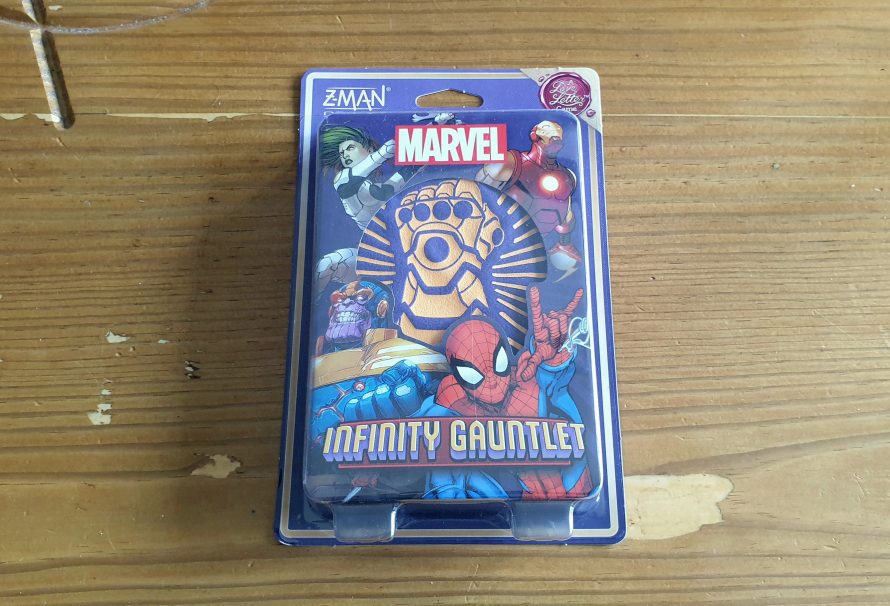 Marvel Infinity Gauntlet is a brand new card game from publisher Z-Man Games, themed around Thanos’ search for the six infinity stones. The game is designed by Alexandar Ortloff and Seiji Kanai, the man behind Love Letter which this new game is based upon. Infinity Gauntlet takes the much loved gameplay of Love Letter and puts an all against one spin on it. Taking around 10 minutes to play, with 2 – 6 players, Infinity Gauntlet sees the Avengers try to defeat Thanos before it’s too late. However, do characters such as Iron Man, Spider-Man and Captain Marvel impact Love Letter at all? Let’s find out!

From the offing it is clear that Infinity Gauntlet may be a Love Letter inspired game, but it is not just a reskin. Firstly, the players must split into two teams, with one player becoming Thanos and the rest becoming the Avengers. A health tracker is put into the middle of the table, with Thanos’ health determined by the total player count and the Avengers health always initially set to 6. Each team has their own deck, which are independently shuffled. Thanos draws 2 cards from his deck, a change from the original, with the heroes drawing 1 card each, from their deck. The final aspects of setup are to place the power tokens within reach and pass out reminder cards to everyone that wants one – detailing what all of the cards do and their frequencies in the decks.

Starting with Thanos and then going clockwise around the table, players take it in turns to draw a card and then play one from their hand. This means that on Thanos’ turns he will have 3 cards to choose from, whilst the Avenger players will have two to pick from. Each card has an assigned value. For the hero side every card of that value is identical. For example, all of the value 1 cards (Spider-Man, Star-Lord and Nebula) allow them to guess a number in Thanos’ hand – discarding it if he is holding a card of that value. Thanos has similar cards allowing him to guess a number, potentially against all of the heroes simultaneously.

Infinity Gauntlet is all about knowledge, and not only for this guessing element. Some cards will allow the Avenger players to fight Thanos or vice versa, by comparing the values of their cards. As Thanos can have two cards at this stage the card is randomly chosen by the hero if they instigated the fight, or by Thanos himself if he started the fight. Either way whoever has the lowest valued card must discard it. Other cards can allow teammates to see one of Thanos’ cards, gain power tokens that increase your cards value by 2 in a fight and more.

Whenever a player is forced to discard a card, via guessing or a fight, their team loses 1 health and they draw a new card – rather than being eliminated as in the original Love Letter. A team wins when they manage to get the other team’s health to zero. Thanos does have a bit of a trick up his sleeve though. While that is the only way for heroes to win, Thanos can win if he has played and/or holds in his hand all 6 infinity stones – seeing him snap his fingers… and we all know how that ended. If these infinity stone cards are defeated at any time they are reshuffled back into Thanos’ deck, so by the end of that deck Thanos will have won.

Infinity Gauntlet has taken the Baron ability from the original Love Letter, used to compare cards, and crafted a new experience around it. There are others such as Guards, guessing the card numbers, and priests, seeing another player’s card. Yet, it is the fighting aspect, the comparing of cards, that is brought to the forefront in this game. One obvious missing power from the original is that of the handmaiden, which stopped you being targeted. It would only serve to waste a turn or turns, with either Thanos being invincible wasting the hero turns or a hero being safe with their teammate becoming the chosen victims instead.

Being an all against one experience changes things, with players wanting to but not being allowed to share information. It is possible to deduce what a teammate has on the heroes side though. Plus, you can massively aid them, be it via power tokens or even just giving them the chance to fight Thanos as part of your turn! Combine this with the fact not every card allows you to obtain the benefit, forcing you to give the benefit to a teammate, and the Avengers do actually work together to take down Thanos.

The selection of characters is something that is interesting when it comes to Marvel games, though often those that haven’t read the comics end up being a little perplexed at the heroes or villains they haven’t seen or heard of before. This isn’t the case with Marvel Infinity Gauntlet, with it featuring the Avengers from the recent films, that we all know and love. Comic style artwork has been utilized, rather than movie stills. So, some of the heroes do look a bit different from what you might expect. However, this art style works perfectly with the rest of the UI of the cards, with plenty of room for the art and the ability of the card, with the card value being extremely clear in the top left.

The only aspect that lets the production quality of the game down is the health tracker. On paper the design should work fine, using a card and two sliders to keep track of things. Unfortunately, the sliders only clip to the edge of the card, having only a small slit on them for the card to fit. This creates a problem as players need to be able to see what health the teams have, and the sliders can slip. With a larger slit the sliders would have gripped onto the card better, with nothing underneath to be blocked. As a result the game is begging for life tokens for the two teams, even if they aren’t as high quality as the solid plastic power tokens.

Playing as Thanos is perhaps the more exciting role initially. He has three cards on a turn, therefore having more choice of what to do. Thanos’ card abilities also feel stronger, especially the infinity stone cards. Combine this with the additional way to win and fans will be itching to play as the villain. With all of those powerful elements though there is something special about playing as the Avengers and taking Thanos down, especially as it always seems to be just in time.

Teaching Marvel Infinity Gauntlet is a little trickier than the original. Despite there being less cards to explain for a single side, players will need to know what could come their way – so they need to know not only what they can do but also what their opponent can do. While these do match up loosely, there are a few tweaks to the abilities from the Avengers side to Thanos’ deck. One trick is to teach the game referring only to the card values, ignoring that the characters can be different but have the same power. There is still the issue that the cards valued the same for the Avengers and Thanos won’t align but it does make it easier. Thankfully, the stones make some sense. For example, the time stone lets another action be repeated like time has been turned back. Plus, the stones are just better versions of the normal card of the same number

Being able to replicate the recent Marvel films in the form of a Love Letter experience should be a match made in heaven for me as a huge fan of both. A big part of Love Letter was the ability to bluff others and it is still there, it just takes a bit of a backseat to the fighting/comparing element of the experience – which may put some off. Infinity Gauntlet is a little harder to get to the table. As different players do different things it makes teaching the rules a little longer. By making things easier and referring to the cards only by their values it then detracts from the theme, as it is no longer Iron Man fighting someone but simply comparing a 6. When playing multiple times these issues ebb away, allowing the entertainment of the infinity stone to surface. It might not quite reach the heights of Love Letter, but everyone will want to play round after round, either to play as Thanos or stop him before he snaps his fingers!

(Editor’s Note: Marvel Infinity Gauntlet: A Love Letter Game was provided to us by Asmodee for the review. The game is currently available from local board game stores, some of which are reopening! Find your local store here.)