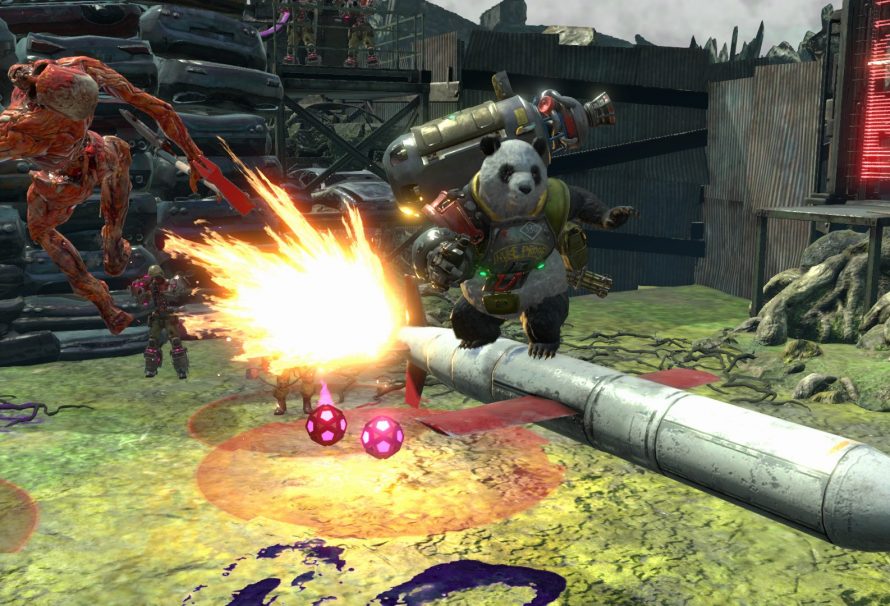 Going into Contra: Rogue Corps, one thing is made perfectly clear, it’s a game that doesn’t take itself seriously. This can both be a good and bad thing. Characters that have to harm themselves to prevent an alien from taking over their body or a panda add a lot of novelty, it’s how far with the concept they go. The E3 demo didn’t detail everything, but it did show a game that, while fun, didn’t feel like Contra.

The issue is actually pretty simple. Without one hit deaths and adding weapon customization and side objectives to stages, there isn’t much that separates Contra from another top-down shoot ‘em up like Dead Nation. Stages boil down to shooting enemies before they shoot you and preventing weapons from overheating or getting overran. It proved more difficult than you might think but nothing overly memorable either.

Even bosses felt rather bland. One of them was a giant dude who shoot things that you needed to avoid, with the hardest part being enemy management, and another was the ever popular robot you need to shoot from behind. To make up for a lack of substance, Contra: Rogue Corps doubles down on style. Riding a bomb that takes out a bunch of enemies or adding an elaborate finishing move is cool, at least the first five or 10 times, it just doesn’t have that much runway.

After a while it feels like you’re going through the motions. The story does a good job of breaking some of that up and had me interested, in the so bad it’s good way, but unless something changes, Contra: Rogue Corps feels less like the latest in an iconic series and more a lifeless sequel that uses style to make up for substance.

Facebook Twitter Google+ LinkedIn Pinterest Tumblr WhatsApp E-mail
Previous article E3 2019: Harvest Moon: Mad Dash Might Just Be the Most Enjoyable Game I Played at E3
Next article E3 2019: Code Vein has Improved But Not by Much