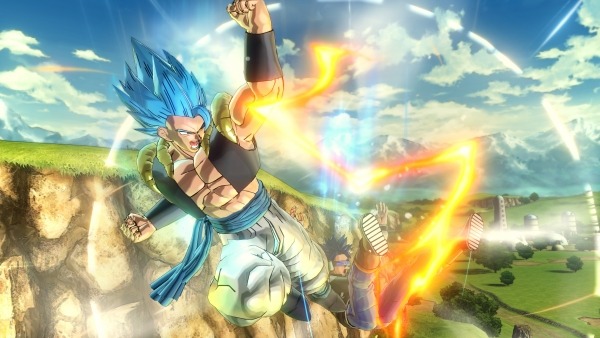 Early 2019 is an exciting time to be a Dragon Ball fan. Not only is Dragon Ball Super: Broly out, but Dragon Ball Xenoverse 2 is getting Gogeta.

Gogeta will be landing in Dragon Ball Xenoverse 2 as paid DLC in early 2019. He’s not the only character flying into the game because a full powered version of Broly is also coming. You can get the DLC separately or it is included as part of the Expansion Pass.

Gogeta will make his first canonical appearance in Dragon Ball in the upcoming Dragon Ball Super: Broly movie. This character is the fusion dance result of both Goku and Vegeta. Broly is also making his first appearance in the official canon too. Before, both characters only appeared in spin-off movies.

Anyway, you can read more about the characters’ DLC announcement below. Information has been taken from the official press release.

“Following the announcement of Gogeta’s inclusion in the upcoming movie Dragon Ball Super: Broly, BANDAI NAMCO Entertainment Europe is pleased to reveal that a fully-powered Gogeta will be a playable character in DRAGON BALL XENOVERSE 2 Extra Pack 4.

Also, a new Photo Mode will also be coming in early 2019. This new mode allows players to capture their favourite battle poses or attacks. The photos can then be edited with different settings, additional stamps and frames in order to improve the finished pictures.

Extra Pack 4 is available as part of the Extra Pass or can be purchased separately. This winter, all players will also receive a separate free update featuring Goku’s and Vegeta’s Snowsuits, Broly’s wig, Videl and Android 18’s costumes, as well as the Christmas themed Santa outfit.”

Dragon Ball Xenoverse 2 is out now for you to buy on the PS4, Xbox One, Nintendo Switch and PC platforms.