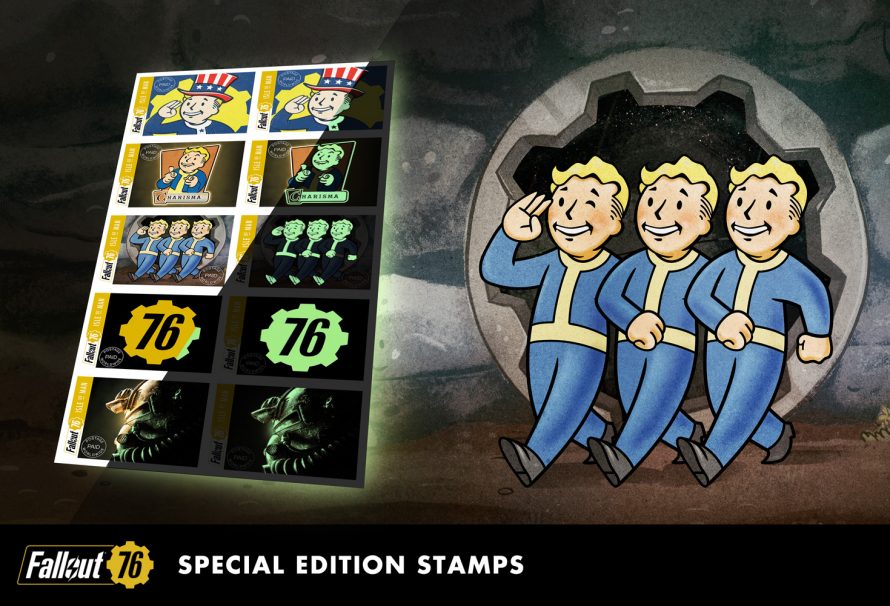 Bethesda Softworks has just confirmed that it is to celebrate the launch of their brand new title Fallout 76 with a limited-edition set of postage stamps across the UK and Europe.

Set to release alongside the game’s release date of the November 14th Bethesda is doing something slightly unusual. Working in conjunction with the world’s more interesting sounding unit, the Isle of Man Post Office, Stamps and Coins Business Unit, Bethesda has designed a set of five official stamps. These stamps will feature imagery from Fallout 76 including “instantly recognisable game elements, including Vault Boy, the Power Armour and Perk Cards”. Above you can see the stamps in all their glory.

It isn’t just an image trick, to go one step further to make them in line with Fallout 76’s collector’s edition, all of the stamps will glow-in-the-dark. The stamps will be used in the UK and Europe as part of a wide-ranging promotional campaign, with Bethesda confirming some will be made available to gamers “via wide-ranging community and social media interactions and competitions”.

The Fallout 76 beta is nearly over with a final live session planned for later today, November 8th. Over the course of the beta Bethesda has released a number of updates, some requiring large, 30+GB, downloads. Hopefully, such drastic changes and downloads won’t be required when the full game is out other than during the initial install. Either way the beta has allowed the developers to catch a number of bugs that would have otherwise made it into the final release. The game is set to launch on Xbox One, PlayStation 4 and PC next week, on November 14th.

Bethesda’s description of their upcoming release:

“Fallout 76 is an online prequel where every person you encounter is another player. Under the threat of nuclear annihilation, players enter the largest, most dynamic world ever created in the legendary Fallout universe. Work together to survive, or go it alone.”