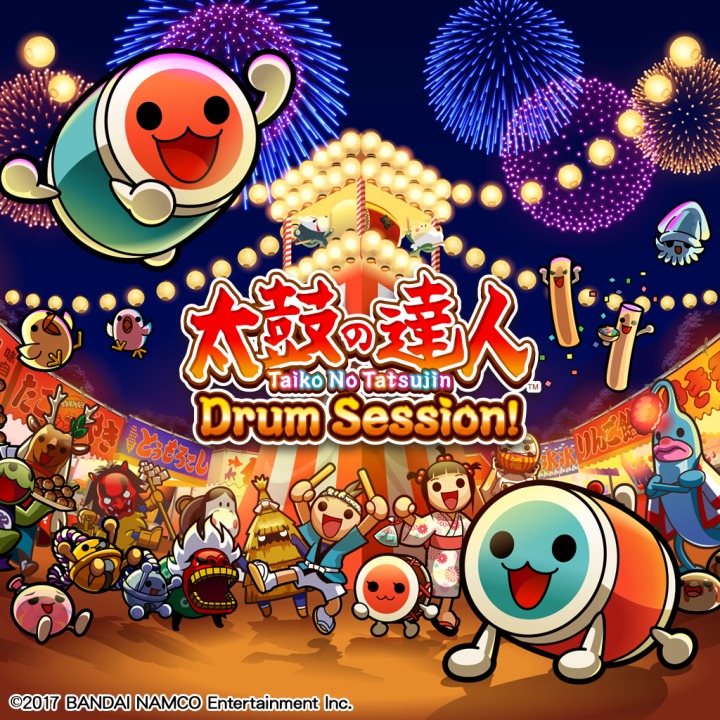 When Taiko no Tatsujin originally came to the west it was held back by a number of mistakes. Since it was trying to cater to the then popular Rockband/Guitar Hero community, it included the drum and removed all the Japanese songs in favor of English hits. Even though some parts were changed, it still retained the cute characters and quirks that people associate with the East. Needless to say, it failed horribly. This stopped us from getting the subsequent titles for years. However, now that things have changed, we’re given another chance at a Taiko no Tatsujin game. With a bunch of songs, tons of costumes and online play, is Taiko no Tatsujin: Drum Session! a must or is it proof the West isn’t missing out?

Taiko no Tatsujin: Drum Session! is a rather odd entry in the franchise. For a while the series has seen the value in expanding the core concept, with some of them having elaborate RPG and story modes, though Taiko no Tatsujin: Drum Session!opts out in favor of online multiplayer. It isn’t an objectively bad decision, though obviously a shame for anyone for more than the standard arcade game, since that is all there is to do. 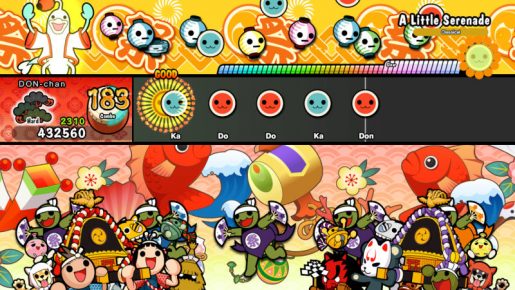 Before we talk about online, it’s important to understand what Taiko no Tatsujin: Drum Session! is like. Similar to, say, Guitar Hero, the game is shockingly simple, yet extremely addicting and a massive learning curve. All players need to do is watch the screen, select the correct input at the right time and continue to do so for a minute or three. What makes Taiko no Tatsujin so deceptively simple is the fact there are only two inputs, which relate to the drum itself. One is to signify the center part of the drum and the other denotes the outside. What makes this difficult is a variety of things.

Most songs are hard for one of three reasons. Either they’re really fast, constantly alternate or require multiple quick inputs, with harder songs implementing two or more of these things. The nice thing is that there is a rather distinct learning curve that makes it fairly accessible to anyone looking to learn. Every song is given a difficulty rating, though whether you agree with it will vary depending on the song, with each difficulty having their own style.

Newcomers will enjoy easy, since they’re largely the same input. As you go up to normal, songs will start to throw in the other input. Hard uses both fairly often and isn’t afraid to ask players to input multiple things at once. And those willing to put in the time can expect multiple inputs and frequent input changes. It’s done in a way where you can certainly master hard, assuming you put in the time, with enough difficulty to make extreme feel rewarding.

Those who struggle with songs being too easy or dislike how things work can change the mechanics. From random inputs to faster speed, it offers an experience that can cater to multiple people. All this comes together in the games main attraction, multiplayer.

The idea behind multiplayer is rather simple. Taiko no Tatsujin: Drum Session! uploads ghost data and you need to simply out perform the ghost. What makes this mode so thrilling is that it’s a good leveler. At times I think I am awful, yet you can play against someone who is worse and remember that you’ve improved, just like others will remind you that there is a long way to go to be the best. The downside to this mode is that it really isn’t different from just playing the arcade game.

Sure, you can unlock online exclusive items, rank up and compete, though the only difference between a normal match is you can see how well someone else performed. Unlike most online modes, the core experience is unchanged. Playing X song on Y difficulty, online, offline or three different times does not result in a change. It will always have the same arrangement, speed, timing and order, just your motivations change. For some this is enough, though it really isn’t enough to sustain the experience long term.

Even if I didn’t discuss it, Taiko no Tatsujin: Drum Sessions! biggest strength is song diversity. It’s the only rhythm game where you can play game, anime, Jpop, classical and more songs. This alone makes it a solid choice for anyone who loves music or the rhythm genre. Sure, it might seem rather simple and overly cute but it’s a game with untold amounts of depth. While online doesn’t do much to maximize it and the bingo system is only compelling if you’re not that skilled, it’s still a solid experience.