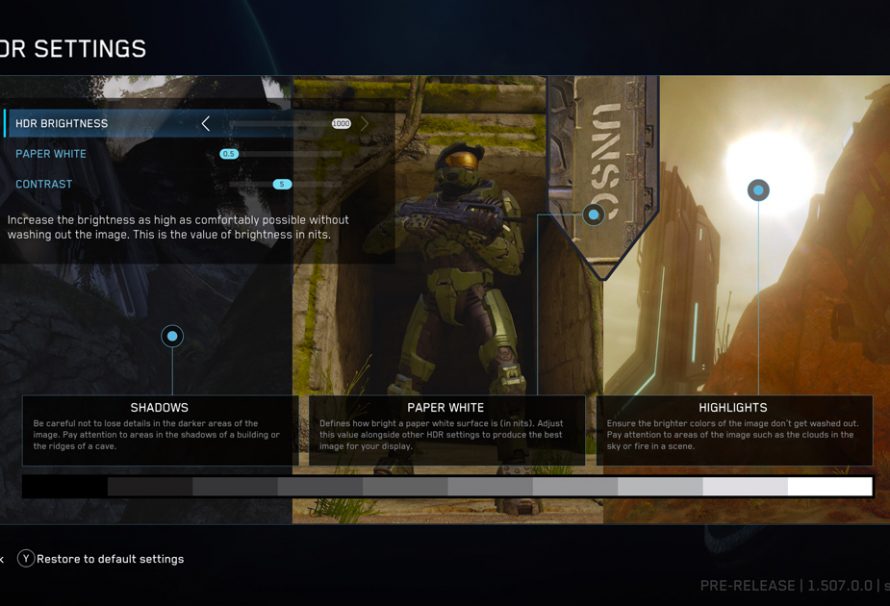 After the long wait, 343 Industries finally announced today that the Halo: The Master Chief Collection game update that promises a lot of new features will begin to roll out today, August 27.

First off, those who are subscribed to Game Pass will be pleased to know that Halo: The Master Chief Collection will be included to the growing list of games on September 1.

As for the updates and new features of the game update:

NEW FEATURES
This first major update weighs in at a hefty ~73GB and includes a variety of brand new features available to everyone who owns a copy of MCC (or acquires it via Xbox Game Pass). Here are the big-ticket items you’ll experience once it’s installed:

VISUAL ENHANCEMENTS FOR XBOX ONE X
If you own an Xbox One X and a compatible TV you’re in for a real treat – MCC has received visual enhancements to deliver the entire Master Chief saga up to 4K UHD and HDR. And of course, each of the titles in MCC already run at 60FPS delivering what truly is the definitive way to experience the classic Halo collection.

A new HDR and SDR video settings option has been added to the game to provide fine-tuning and calibration options to ensure MCC looks as good as possible across a variety of different hardware setups and personal preferences.

IMPROVED MATCHMAKING
The Xbox platform and online services have evolved and grown in many ways since MCC was first released in 2014. With this patch, the foundation of MCC is getting modernized and updated to take advantage of the latest and greatest Xbox matchmaking and networking features and functionality. The result for players is an online experience that’s significantly more stable across both Multiplayer and Campaign co-op offerings.

MCC also now utilizes dedicated servers housed in Microsoft global datacenters for all Matchmaking game sessions to provide further stability, reliability, and consistency. Within the game you’ll now see what your average ping time is to each of the data centers. You can view your approximate pings in the main menu under “Options & Career / Settings / Network.”

The MCC community has given lots of feedback over the years that the original voting system that was used to determine the game/map offerings for Matchmaking wasn’t ideal and made it challenging for players to play what they wanted, when they wanted. With this update, most Matchmaking Playlists have been broken up into per-game offerings, ensuring you can enjoy Halo 3 BTB all day long or stick with Halo 4 Team Arena if that’s your preference. MCC also now offers continuous Matchmaking so once a game ends, players will be able to get right back in the action quickly and conveniently.

OFFLINE LAN SUPPORT
Well before the advent of Xbox Live, the early days of Halo were defined by late nights of intense multiplayer games in basements, dorms, and living rooms. MCC now works better than ever online but the ability to play classic Halo games with friends on the same local network with minimal latency is something players have been asking for since initial launch. With this update, MCC will now support offline play across a LAN with no internet connectivity needed at all.

In order to setup offline LAN play on MCC, a DHCP enabled hub will be required – these hubs allow IP addresses to be assigned to connected consoles. Alternatively, you can also manually configure the IP addresses for each Xbox via the System Settings for each console on the network. Either way, each Xbox needs to have a unique identity with a network configuration that allows it to route packets.

INTELLIGENT DELIVERY
“Intelligent Delivery” is a new feature that allows the individual facets of the overall MCC package to be selectively installed by players. MCC is a large game, jam packed with content (and it could even grow more in the future), so this really is a great quality of life improvement to give players more control over the experience and their console’s storage.

If you don’t care to play the Halo 2 campaign or Halo 4 multiplayer, you don’t have to install those components. Another nice bonus of Intelligent Delivery is that it will also allow players to install languages other than what their console is natively set to.

It’s important to note that choosing not to install game components is an “opt out” process. This ensures most players have the needed content for co-op and multiplayer scenarios while giving everyone control over their hard drive usage and which content they want to keep installed. By default, MCC will attempt to install the entire ~70GB package. However, once the game displays “Ready to Play”, you can launch the game and access the Intelligent Delivery settings to customization your installation specifics.

FASTER LOAD TIMES
Over the course of working on this update, the team has been able to achieve significant optimizations across the entire title which results in greatly reduced loading times for all of the content in MCC. Regardless of which flavor of Xbox One you’re playing on, everyone will experience quicker load times on every aspect of MCC – but it’ll be extra noticeable with Halo 2 Anniversary in particular.

UPDATED MENUS & UI ELEMENTS
From the moment you launch MCC you’ll notice a brand-new splash screen and updated layouts and UI components throughout the game. From a new horizontal layout to new settings options to a more prominent Message of the Day, MCC got a fresh coat of paint and is both better looking and more functional.