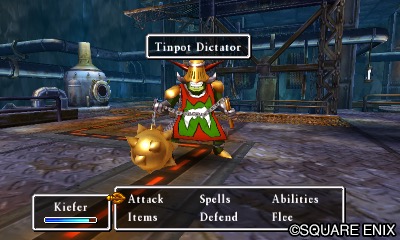 Nintendo announced today during its Nintendo Treehouse Live at E3 that Dragon Quest VII: Fragments of the Forgotten Past will launch for the Nintendo 3DS in North America on September 16.

Dragon Quest VII for the 3DS is a remake of the PS1 version that was released decades ago. Players will travel to the past to restore forgotten lands and battle unknown evils in attempts to save the present. Fans will be pleased to hear that Dragon Quest VII will feature over 30 vocations and classic battles.

Travel to the past to save the present as you restore forgotten lands and battle an unknown evil in this classic Dragon Quest adventure—completely rebuilt from the ground up for the Nintendo 3DS system. Customize your party from more than 30 vocations and level up in turn-based battles to learn new spells and abilities in this timeless quest!

– Rebuilt visuals and a complete retelling of the story make this a fresh way to experience this classic game.
– Explore a beautifully designed world that you shape as you travel back and forth in time.
– Meet an iconic cast of classic characters and monsters designed by critically acclaimed manga and game artist Akira Toriyama.
– Customize your party from more than 30 vocations and level up in turn-based battles to learn new spells and abilities.
– Expand and share your adventure even more with the StreetPass feature—send and receive traveler’s tablets to explore new dungeons that contain rare monsters and unique equipment.