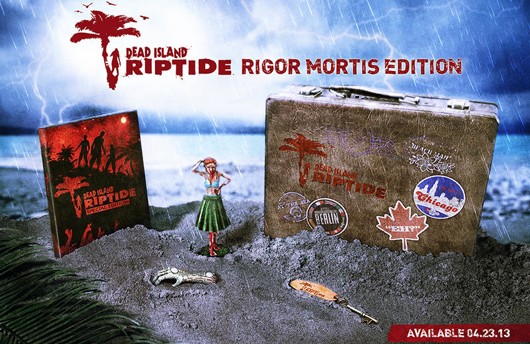 Deep Silver announced today that Dead Island: Riptide will be getting a super limited edition called ‘Rigor Mortis’ where a lot of goodies will be included.

The Rigor Mortis edition will retail for $80 and it will include all of the things you need to survive a zombie apocalypse. The limited edition package will include a small suitcase, a hula girl figurine that is a zombie, a bottle opener, and a key. Also, there will be a digital strategy map and bundled DLC included. According to Deep Silver, the decision and contents for this Rigor Mortis was from a fan survey they conducted a few months ago.

If the content of the Rigor Mortis edition intrigues you, it’s now available for pre-order in North and Latin America. Remember, quantities will be limited!