Pokemon Rumble Blast is the first Pokemon game to arrive on the Nintendo 3DS. While the game was already released on the WiiWare back in 2009 under the name Pokemon Rumble, the 3DS version that is now available has several enhancements and added features that Pokemon fans will love to play.

Is Rumble Blast worth purchasing even though some gamers may have played Rumble on the WiiWare? Let’s check out what’s HOT and what’s NOT in our Pokemon Rumble Blast review to find out.

Story Exists in Rumble Blast
In Rumble on the WiiWare, one of the biggest complaints amongst gamers was the lack of a story as you’re basically a toy Pokemon and your job is to go through different areas for Battle Royale in order to become a champion. In Rumble Blast, the story is the same but the developer added some twists to it. As with every Pokemon game out there, you will always have a rival. Your rival in Rumble Blast will give you trouble as you play through it, and small twists will develop throughout the story. The Glowing Fountain is losing its touch and the only suspect that resides in the town is your rival.

While the story is really not as big as you would expect, there’s still the mystery that you will have to find out by playing from start to finish.

Easy to Grasp and Fun Action all in 3D!
Playing Rumble Blast isn’t complicated. As soon as you start the game, you can go ahead and compete on the Battle Royale in every area. Collecting Pokemon can be done by simply brawling with them in the forest, beaches and caves throughout the world. Typically, there are two to three dungeons that you will have to go through before competing on the Battle Royale. While progressing through the dungeons, you can befriend the Pokemon that you brawl with. What Pokemon you get will be random, but in every dungeon there are eight or more Pokemon that are possible to befriend. It’s recommended to go through the dungeons more than once, as you’ll never know which Pokemon you’ll encounter.

Using the Pokemon when brawling with other Pokemon isn’t as hard as it was back on the Gameboy Advance. Each Pokemon that joins your party will have one unique attack and another space for a teachable move like Cut or Rocksmash. Since you will be getting multiple Pokemon of the same species, it’s best to know which one you would like to use. However, since the Pokemon in Rumble Blast don’t level up, you’ll have to rely on the Attack Power that is displayed when you choose what Pokemon you will be using. Basically, as you go far into the game, you’ll befriend a Pokemon that has a 300 attack power and the ones with 40 or 10 in your party will most likely be ignored and never be used again.

After clearing out the dungeons, it’s time for you to enter the Battle Royale, where your job is to pretty much brawl with a group of 30 – 50 Pokemon at the same time under a specific amount of time. Doing this is fun and with the 3D, you can see how colorful the attacks of the Pokemon can get. Remember that if three of your Pokemon faint, it’s game over. 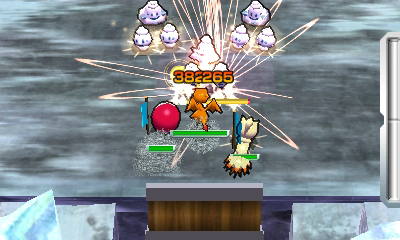 Street Pass Connectivity
One of the unique features of Rumble Blast is the use of the Street Pass. Whenever you cross paths with someone who has the game as well, both of you can brawl with each other. The Pokemon data for each game will be downloaded to each of the 3DSs, and players can access it via the Toy Store menu in Toy Town.

In addition to the Street Pass, players can team up with friends and play co-op with one another. This is pretty much the best thing to do in Rumble Blast as the more people that joins the game, the more fun it gets.

More Pokemon!
If you love seeing all of the Pokemon in action, you will be glad to know that they’re here. There are over 600 Toy Pokemon that you can befriend and use to brawl with other Pokemon. Expect to see the Legendary Zekrom and other Pokemon that you fell in love with over the years.

Might not be appealing to older Pokemon fans
If you’re a Pokemon fan like me who has played all the Pokemon games, you will most likely feel that Pokemon Rumble Blast is aimed at younger audiences. As mentioned above, the gameplay of Rumble Blast is easy and will require no strategy at all. If you’re looking for a game that has depth through having your Pokemon grow, you will not find it here. Younger audiences however can easily get into the game without the trouble of worrying about the complicated gameplay style found on the Gameboy and Nintendo DS Pokemon games.

Good use of 3D but Dungeons Lack Variety
The game looks pretty good in 3D. The depth of each of the Pokemon is perfect but the game falls down from the lack of variety in the dungeons. Just like Rumble on the Wii, Rumble Blast suffers from repetitive and monotonous dungeons that may get old for players who will play it non-stop. It would be good if the developer adds some variety to how the dungeons are laid out.

Steep Price
For a game that’s already available on WiiWare, the $34.99 price is a little bit steep. The new features that Rumble Blast has to offer don’t justify enough the inflated price of the game. However, if you don’t have a Wii and you’re a true Pokemon fan, it may be worth getting.

It’s fun at first but gets tiring
The moment I played Rumble Blast, I was so excited and told myself that this game is awesome. After playing the game for more than an hour, I started to notice that I’ve been doing the same mindless brawling action with Pokemon non-stop, and it’s becoming very tedious. I stopped for a day and played it the next day to see if I could get interested in the game again. Well, it works for an hour again but then I got the familiar repetitive feeling and needed to stop. The game is fun but I can’t see myself playing it for hours like what I’ve done with past Pokemon titles on a handheld.

Pokemon Rumble Blast is fun and will you won’t need any strategy when playing as it’s simply a smash brawling game with other Pokemon. The simple gameplay mechanics will appeal more to younger audiences than the older ones who have played a lot of Pokemon games in the past. The game has no depth at all to make older fans of the Pokemon series to have any interest to this title. While the game is fun, there will be times it will get tedious after doing the same thing over and over again. If you have a Wii, you’re better off buying that version as it’s only $15 compared to the $34.99 for the 3DS. However, if you have a 3DS and you’ve been wanting a Pokemon title to play in 3D, then it’s a must-have.

[Editor’s Note: Pokemon Rumble Blast was reviewed on the Nintendo 3DS hardware. The game was provided to us by the publisher for review purposes.]