PC gamers were graced with The Witcher 2 about a month ago courtesy of CD Projekt RED. Upon release, the game received numerous commendations for its graphics, storytelling, combat system, and superb RPG elements. Up until now, the game has been a PC exclusive. Now, lucky Xbox 360 owners get to enjoy the rich tale following Geralt of Rivia on their console later on this year.

Two of the most prominent aspects of the Witcher 2 are player choice and consequences. For this demonstration, two different styles were used on the prison break level. Stealth was the first option. After antagonizing a guard to the point where he entered Geralt’s cell (and was taken out via QTE) so that an exit was possible, Geralt slowly made his way through winding corridors using a cover system. Stealth kills came in handy for taking out patrolling guards and a force-like power was effective for blowing out torches. During this playthrough, due to previous decisions, Baroness La Valette was imprisoned and needed help. Geralt was able to intervene in her torturing and set her free. Shortly after, Geralt emerged from the prison to a silent, starry night. 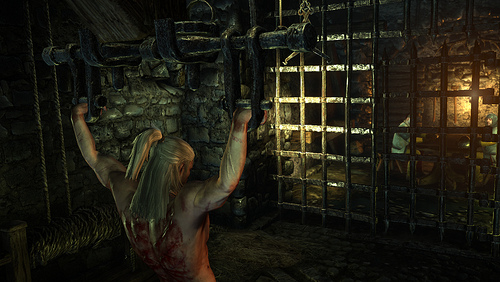 On the second playthrough, Geralt took a more straight-forward approach. Relying primarily on confrontation and combat, guards came around every corner and were dispatched with ease thanks to countering and a power that laid a fire trap on the ground. After cutting through a few sets of gaurds, Geralt came across Aryan, son of Baroness La Valette. His injuries were severe and he needed help walking. To ensure a successful escape, Geralt took care of the opposition awaiting them upstairs. After that, he was able to lend Aryan a hand. Aryan, wanting revenge for his injuries, stayed behind as Geralt left to set off some explosives. When Geralt exits the castle this time, he isn’t met with a quiet, dark backdrop. Instead, the fire has spread through the structure and flames licked the outside of the castle walls as they reached out various windows. With these two very different walktrhoughs ending, we were informed that there were still two other possible paths that could be taken.

Being a demo put together using pre-alpha code, I still found the visuals to be beautiful and immersive. Not to mention that most of the animations were executed smoothly. You won’t even have to worry about loading times taking you away from the breathtaking world since there aren’t any once the game starts up. If you aren’t interested yet, then let me tell you that this version not only comes with all PC updates and content, but all future DLC will be absolutely free just like the PC. 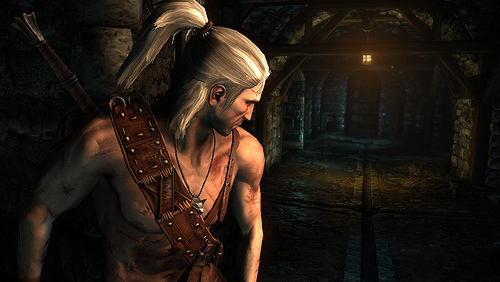 Don’t fret just yet PS3 gamers. There’s still hope for you yet. We were told that Witcher 2 isn’t a Microsoft exclusive and the only reason they aren’t currently working on a Playstation version is that they like to focus on one project at a time. They did convey interest in expanding their fanbase by bringing the game to more consoles in the future however.

Witcher 2 on Xbox 360 will come out before the year ends.

Skyrim Dragonborn DLC - How to get to Solstheim