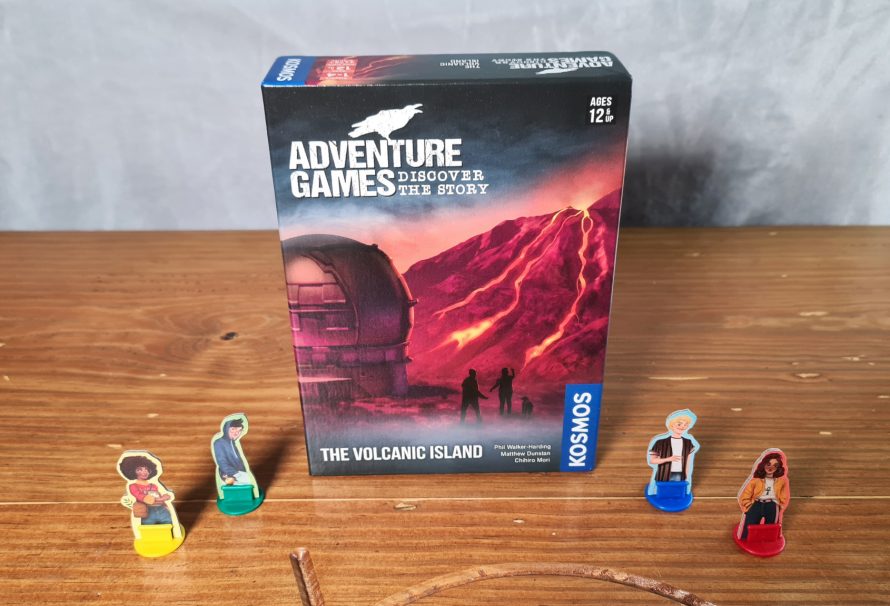 Adventure Games: The Volcanic Island is a story focused escape room style game, where 1 – 4 players take up the role of students during mysterious events. From publisher Kosmos and designers Matthew Dunstan, Chihiro Mori and Phil Walker-Harding, the story is split over 4 chapters. These see the players explore the island, talk to the locals, stumble across a wide variety of items and slowly discover what’s happening. However, is this a natural disaster to play? Let’s find out!

Unlike normal escape room style games, the titles in the Adventure Games series are not against a timer. Players are free to experience the unraveling story at their own pace. The story is advanced by exploring, interacting with locations and utilizing items collected along the way. Starting out each player chooses one of the four students, claiming the character card and the associated standee. Location card A is put into the center of the table, with decks of additional cards placed face down, as to not reveal anything ahead of time.

Location A is the starting location, and like every location it has a passage in the included booklet to be read aloud – setting the scene and starting the mystery. From here on players will be able to visit and interact with places on the revealed location cards. These places are denoted with 3 digit numbers, which can be looked up in the booklet or typed into the app. Players can choose to go through the entire experience reading from the book, as a purely analogue experience, or utilize the Kosmos Helper App. The app is free to download and sees players typing in the same numbers they would look up in the booklet, with a narrator reading out the passages.

In some places players will find items, which are found in the deck via numbers on the card backs. In others they will speak with some of the locals or find additional locations to explore. At times players may wish to use an item in their possession at a location. An example, not from the adventure, would be using a key with a locked door. This is achieved by combining the numbers together. Using the previous example, if the key was item card 12 and the door was location 345 the number to look up would be 12345. Using the same logic players can combine some items together, into more useful items.

Interacting with locations, both with and without items, advances the storyline onwards. Slowly new locations are introduced and information about what might truly be going on is revealed. Players will venture through the narrative together across the four chapters. At the end of each chapter points are awarded, which need to be noted down. Points are just a gauge of how well players did, with plenty of items and clues not necessarily found along the main path of the story. There is no win condition though, players will finish the story one way or another, they might just be able to pat themselves on the back more with a higher score.

The story spans across 4 chapters, with the box recommending 75 minutes for each. This is about right. For us the first two chapters were closer to an hour.  Chapter 3 was just over an hour and a quarter, with Chapter 4 lasting an hour – though choosing a different path could have resulted in additional content to play. We played through the first two chapters in one sitting, leaving it set up between 2 & 3 and fully packed the game away between chapters 3 & 4. Leaving the game setup made things a little easier. There was no need to photograph what cards players had, nor did we have to pack content away in the box in specific ways to effectively save the game. That being said, the ability to completely pause the game between chapters, with the breaks falling at logical times in the story, means it’ll be easier for gamers to get the game to the table over the course of a weekend, a week or longer.

The branching narrative design shows ambition to go above and beyond. It is a shame that it is somewhat at the expense of the storyline. A sign of this were times where we asked each other who characters were, and if we had met them before or heard them mentioned – with some being unforgettable or confused with others. Without spoiling the story there were certainly some elements that were unnecessary. They seemed out of place and then were only briefly mentioned or utilized, despite sounding like they should be more impactful. Exacerbating this there were a few leaps in logic and lulls where there was no obvious route to progress. When this stage was reached the experience inevitably turned into just trying the different location numbers and randomly combining items. Despite some of the quirky bits appearing in Chapter 4 it was the most logical story wise – with a clearly defined issue for the team to overcome driving things forward. The direction of the final chapter meant the story, despite wobbly, did end on a high and at no point did we consider not finding out how things concluded.

Some may not like the way that at stages players need to add additional numbers into the mix, so, as an example, location 101 would become 141. It’s odd as sometimes location cards were replaced and other times cards came out of the deck instructing players to add something to all place numbers on specific location cards. The numbers to add were all multiples of 10, keeping the mental maths on the easy side, it just lacks consistency. It’s also an additional thing to think about, outside of the story, detracting from the immersion of the experience.

With many games where choices are there to be made, players may not always know what their choice of action might trigger. Using the old saying of give a dog a bone as a rough example, in this scenario players could give an item (the bone) to the dog by interacting with the location the dog is at. Whether the dog takes the bone and happily sits there or runs off is out of the players’ control, with that bit of story triggered by the game. There were a few occasions when something like this happened outside of players control. Some may not get along with this but it does mean that the story has some twists and turns to it, which players will then have to react to in some way.

Compared to the average escape room title the Adventure Games series, and specifically The Volcanic Island, sells itself as replayable. There are puzzles along the way, which I would struggle not to remember. For the most part though it is about following the storyline, which does have some branching paths. Not only are multiple endings possible there are events during the story that will be different depending on what cards the team has available. As someone unlikely to reread a book, it will be a long time before I would return to playthrough again even with these variations. Still, it does make it more interesting talking through the adventure with others as what happened may be different for them.

Having the Kosmos Helper App there to read the passages of text out saves players a lot of time flicking through the booklet. While there is the ability to mistype a number and hear a spoiler this equates to a smaller risk than when flicking through the pages of the booklet to find an entry. For this ease of play the app makes the experience a faster flowing one, with no breaks as someone looks up the next number. A criticism of the app would be that “all” it does is read out the entries of the booklet. Unlike other board game app integrations the Kosmos Helper App doesn’t keep track of anything for the players, not even the points earnt in previous chapters. The experience is playable without touching a smartphone, yet if we were asked if we had a specific numbered card once in the adventure we were asked a hundred times. It wasn’t exactly frustrating but it was a bit of a reminder that the app is merely a different way to read the passages of text.

Adventure Games: The Volcanic Island tries something which most escape room style games don’t – to be somewhat replayable. Normally, everything is experienced be it the plot or the puzzles. With a somewhat branching storyline and locations that you might not discover along the way Adventure Games: The Volcanic Island cannot be fully experienced in one playthrough. Also, with no timer to beat players can play through the experience at their own speed – especially when considering the way it is split into chapters. The downside is that the storyline is such that some will not want to revisit the island again, though still having made your path through the story is something to enjoy. For those looking to try out a story driven game like this then it is easier to recommend Adventure Games: Monochrome Inc, the previous installment of the series.

(Editor’s Note: Adventure Games: The Volcanic Island was provided to us by Kosmos for the review. Check out the official game page here.)