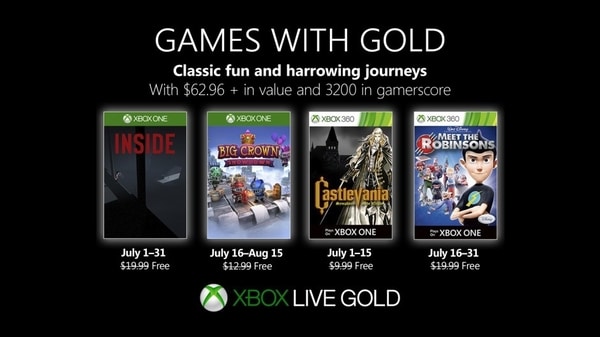 As hit the first of July 2019 tomorrow, Microsoft reveled the list of games that will be give out for free to those who are subscribed to Xbox Live Gold.

The following are the list of games that are coming for the month of July:

Inside – for the whole month of July
Description:
Hunted and alone, a boy finds himself drawn into the center of a dark project.

Big Crown Shodown – From July 16 to August 15
Description:
Big Crown: Showdown sees friends become foes as they compete for the crown in 4-player local and online multiplayer combat, set over 3 wacky worlds full of medieval shenanigans. Avoid perilous hazards and engage in frantic fights as you attempt to knock your opponents off 15 crazy courses in the ultimate royal battle!

Castlevania: Symphony of the Night – From July 1 to 15
Description:
Dracula’s castle has risen again and it’s up to the mysterious Alucard to face Dracula and save the world from his nocturnal embrace. Discover hidden rooms, flight dangerous enemies and equip hundreds of weapons to uncover the secret behind Dracula’s power before it’s too late.

Meet the Robinsons – From July 16 to 31
Description:
Help Wilbur Robinson save the future by travelling to the past and putting things back in order.