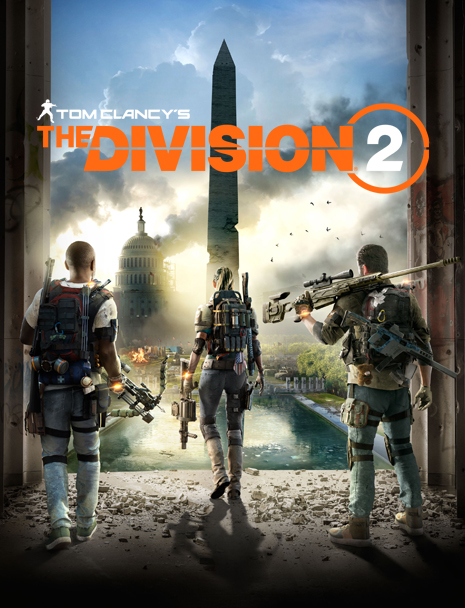 The Division 2 has landed and with it there is a “new sheriff in town”, town being Washington DC. Available for Xbox One, PlayStation 4 and PC, via Uplay, the game has been developed by multiple studios including Massive Entertainment and Ubisoft Reflections. Threats of chemicals haven’t completely been lost from memory but the journey for players is a new one from the original.

Starting the game off with a bit of a wow factor though, unlike many games which wait 20 hours for players to finally get to a stand out location, players will almost instantly be tactically moving across the iconic White House lawn. Gone are the cold white skyscrapers that towered over every street, which quickly blurred into one. This time around players will be wandering and fighting across a more vibrant city. One thing has remained city-wise, the level designs are again expertly crafted for both interior and exterior scenes, to crank the combat up to the next notch. Players will never know exactly where enemies will come from, with cover and points of interested littering the entire map.

The Division 2 carries on from the first in many aspects, with the awesome feeling gun combat and variety of weapons both returning and excelling. There might be a living, breathing world to explore but not just the core of the game revolves around the shooter elements. Unlocking new weapons overtime, and not just the signature weapons, constantly supplies gamers with new toys to play with – though undoubtedly players will find a favorite along the way. This helps the constantly explosive combat sections to shine and makes the whole game a joy to play.

Building the character up how you want to play was another standout feature of the original and it only continues, with an abundance of loot, perks and upgrades to pick from. Take the skills as an example. On one hand you can unlock drones, flying or rolling, each having their own sub-types to pick from – such as healing or sniping. Then, there are some epic skills that break a little from the seriousness, like a reflector shield that literally sees bullets bounced backwards or the chemical mortar that fires blobbed riot foam that locks enemies in place.

There’s a slew of perks to pick from with standard character upgrades, from new optics to gaining more when deconstructing things for materials. One stand out design choice is that almost instantly unlocked is a second weapon slot, letting players feel more of a boss with two main weapons from the very start. Not only is there a decent range the perks aren’t all one and done upgrades, having stages. Some of which – like signature weapon ammo increases – only unlocking when players reach what is deemed end game at level 30.

One of the biggest improvements is the move away from immersion breaking bullet sponging apparel to an actual armour system. Gone are the magical titanium hoodies as per the original, yet enemies can still sponge a tonne of damage if you spray across them. Pinpoint a section of armour will see the durability dwindle and then become a vulnerable spot. It doesn’t completely stop enemies sponging more damage but it gives both logic to why and meaning to aiming.

Ubisoft has been clever in the XP given out for the main story as it is enough to get you most of the way to level 30, when the final mission and then end game content is unlocked. Gamers will be most of the way before this point, but they’ll have to do a good amount of the side missions and extra content to get the last few levels. This isn’t really a chore as they are found across the map and can often be fun activities between main missions.

Aside from the odd issue with the AI, they pose a decent challenge at any level – slowly ramping up alongside players. There are times where their climbing takes so long you can pick them off with ease. Occasionally, when flanking they will simply not react even after you’ve rinsed though their allies crouched next to them. Thankfully these are few and far between, not enough to taint the overall experience but still hopefully something Ubisoft can patch out in due time.

When players reach the end game there isn’t the lull in play that many experienced on completion of the main story in the original. Again, missions are replayable, players can revisit locations that have been retaken and the enemies get harder. This is however due to the arrival of the Black Tusk, not just a buffing of the Hyena faction you’ve been beating down on. The arrival of the Black Tusk isn’t the only time things will get harder. Reclaiming enough strongholds back from them will see players hit milestones, and as you may have guessed each time a tier is reached the difficulty gets ramped up.

There is certainly more to the end game content of The Division 2, my only concern is over time without a structure or story to follow players interest will once again wane. This is where Ubisoft’s post launch plan comes in to hopefully save the day. Three episodes of content will be released in year 1, not as part of a paid for DLC but free to all The Division 2 players. Ubisoft showed a decent amount of support for the original Division, especially when the Dark Zone became contaminated with cheaters – something the promise of a roadmap of content suggests will be carried on.

UI wise a number of nice touches make things quicker to recognise. A prime example is that items on the floor don’t just have a shine to them, there are mini beacons above them. These stop players having to wander around attempting to find which downed enemies have ammo they can pick up and signal the exact locations. It might not sound like much but over time little time saving things like this add up. As for the lines The Division 2 usage of these are phenomenally useful. Whether it is for the arc of a grenade or the line you’ll take if you hold space to move from one cover to another, it is instantly obvious the path that will be taken and, therefore, if it is a good idea.

The Division 2 is playable solo but it becomes more of a punishing game, where players will have to be much more careful and pre-plan things. Going in with close quarter ranged weaponry may seem a good idea but without someone else to draw some of the fire it feels like you get flooded by enemies. Take some out before moving in and it doesn’t feel as crushing. Alas, it doesn’t quite capture the thrill and rush that is generated by the speed of combat when co-oping.

Many of the positives of the orignal have been captured and bundled with a host of improvements, yet The Division 2 still feels like more of the same. Taken on face value this might sound negative but as the original helped the hours pass by, and the sequel matches this, and you start to realise this is another great game from Ubisoft. Built on the core shooter gameplay, the cover based combat is fast paced and explosive – without being too over the top. The storyline provides enough narrative to loosely string together a fair few awesome moments, though can easily be forgotten. The gameplay is the sort of casual fun with a challenge that more games should try to emulate. Put simply, if you enjoyed the first there’s more action awaiting you and for those whom didn’t there’s nothing stopping you from jumping in now!

[Editor’s Note: The Division 2  was provided to us by Ubisoft for the review.]