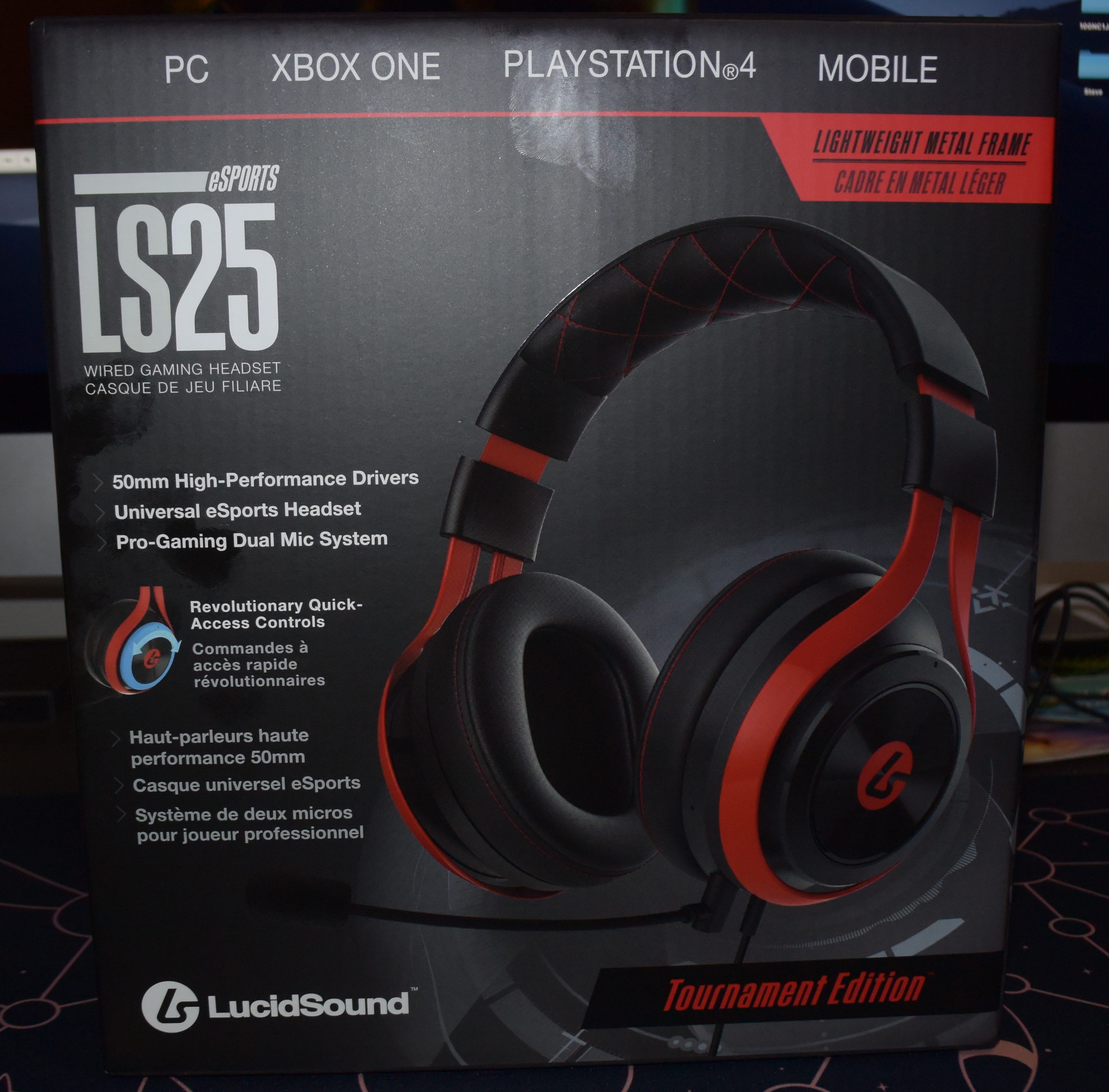 While I can’t speak for everyone, I can’t say I’m the biggest fan of low end products. Once you go to a certain point, all choice is kind of irrelevant. This is largely how gaming headphones are. After moving past earbuds and chat only options, basic headphones are little more than a cheap pair with an acceptable mic. This isn’t a knock against low tier products, Thrustmaster’s line was surprisingly good for the price, it just doesn’t make for an interesting review. Naturally, given the polarized experience I had with LucidSound’s LS20 headphones, I didn’t expect much from their new “eSport” LS25 model.

Just looking at the packaging suggests a different experience from the previous LS20 headphones. It has been updated to look more in line with other mainstream gaming headphones, with a variety of explanations and terms highlighting the advantages these headphones give. Inside the box is a bunch of cords, each in their own plastic packaging and the actual unit in a cardboard holder.

In terms of design, LS25 is surprisingly good for their $74.99 price tag. In fact, I was surprised how close they were to the LS41 unit. With a cheaper leather feel and lack of cooling gel on the earcups, they feel the exact same. The only other major design difference is the included mic. Not only does the LS25 come with a wind sock, the mic itself has openings on both sides, instead of just one on the LS41. I didn’t find these changes to make a difference, nor did anyone I tested these with, but still fascinating how they’re just a little bit different.

What makes the LS25 stand out is the sound. In terms of general use, the two headphones sounded very similar, to the point where I would legitimately believe the main difference between LS25 and LS41 (cooling gel, equalizer, bag, etc) were side features and wireless. What I noticed most was a difference in how these two headphones were equalized.

I found the LS41 were more balanced, leading to them being better at general use and playing music, with the LS25 making footsteps, gun shots and other minor things more pronounced. This gives competitive players a bit of an edge, one that is hard to beat for the price. Sure, Mobius offers the best of both worlds and LS41 is no slouch, both of these options cost more than double the LS25.

Unfortunately, similar to the LS41, I did experience ear fatigue after a couple hours of use. I think this has to do with how tight the headphones are, as it also occurred with their higher tier model, so keep that in mind. That being said, the sound quality outweighs this possible disadvantage, as even if I can wear the Trustmaster headphones for longer, it’s rare that I’d wear for three or so hours (about how long it took to occur) and the difference in sound quality is too vast.

In terms of functionality, I would’ve liked to have seen more. Part of what made me love and use the LS41 is the ability to control game and chat volume by rotating the outer ring of the earcup, something that LS25 does, it just can’t do it for in-game chat. This one feature could easily justify a couple more bucks and make them a little more appealing.

As I mentioned above, I typically shy away from recommending entry level products, but the LS25 is good enough where I could confidently recommend them. I would say they would be an absolute must and give them an editor’s choice award had they included chat volume but even without that they’re easily the best headphones I’ve heard for the money. Even if Surge 3D offers more features and Trustmaster were better for wearing long term, I’d still say LucidSound’s LS25 is the best bang for you buck.

[Editor’s Note: LS25 was provided to us by the publisher for review purposes.]