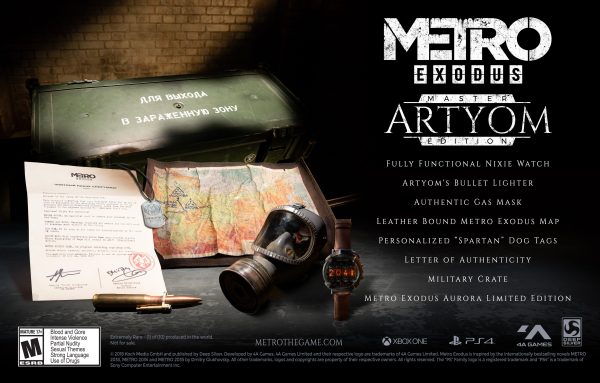 Deep Silver is pleased to announce today that Metro Exodus will be getting an ultra limited hand-crafted and priceless edition called Master Aryton Edition when it launches next month.

There will only be 10 units have been produced and instead of selling it, fans will have an opportunity to win the Artyom Edition via their planned promotion in the coming weeks.

The following are the contents Master Artyon Edition will include:

The first of the ten copies that will be produced has been given to developer 4A games, while the other nine will be given away to fans. For more details about the upcoming promotion, register at the game’s official website or follow the Metro series on other social media networks like Twitter or Facebook.

Here’s an overview of the game, via 4A Games:

A quarter-century after nuclear war devastated the earth, a few thousand survivors still cling to existence beneath the ruins of Moscow, in the tunnels of the Metro.

They have struggled against the poisoned elements, fought mutated beasts and paranormal horrors, and suffered the flames of civil war.

But now, as Artyom, you must flee the Metro and lead a band of Spartan Rangers on an incredible, continent-spanning journey across post-apocalyptic Russia in search of a new life in the East.

Metro Exodus is an epic, story-driven first person shooter from 4A Games that blends deadly combat and stealth with exploration and survival horror in one of the most immersive game worlds ever created.

Explore the Russian wilderness across vast, non-linear levels and follow a thrilling story-line that spans an entire year through spring, summer and autumn to the depths of nuclear winter.

Inspired by the novels of Dmitry Glukhovsky, Metro Exodus continues Artyom’s story in the greatest Metro adventure yet.

Metro Exodus will be available for PlayStation 4, XBox One, and PC on February 15.

Check out the Master Artyom Edition trailer below:

20 Things We Know About Biomutant

Hades rated for PlayStation 4 in Korea