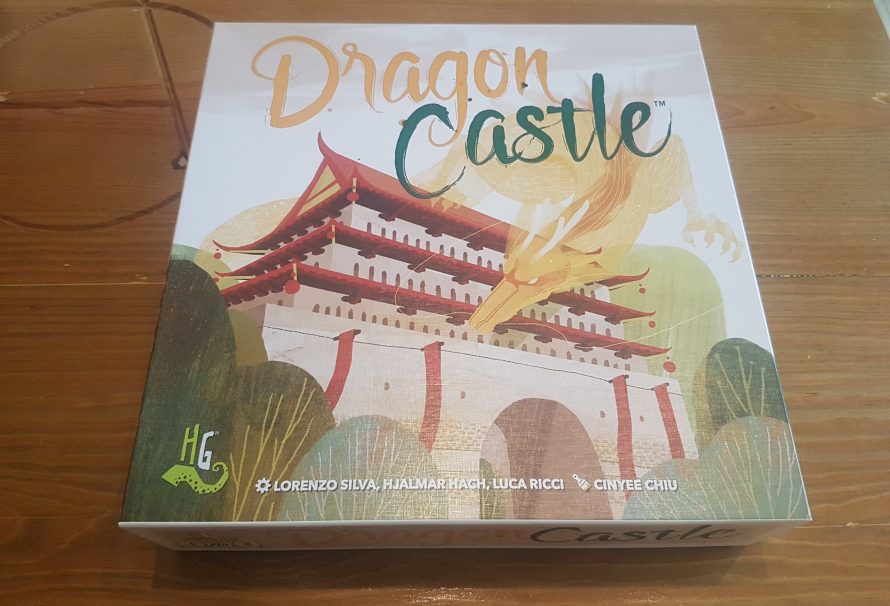 Dragon Castle is an abstract pattern building, tile placement game from publisher Horrible Games. The game is for 2–4 Players and generally lasts between the indicated 30 – 45 minutes, though the first time you play can creep just over that. Inspired by Mahjong Solitaire the premise of the game is for players to claim tiles from a central building, the dragon castle. Players then use these tiles to construct individual castles, equipped with shrines, to score points. However, is this a game where the inspiration has been misplaced? Let’s find out!

At the start of Dragon Castle each player selects a player board, the only difference being the artwork, and the bag of 116 tiles is upended in the middle of the table. After swirling them around to shuffle the tiles a central castle must be constructed made up of three layers. For the first few games players will most likely want to stick with the predefined castle shapes in the rulebook. These are built onto boards based on the player count, though you can freely build a unique design. 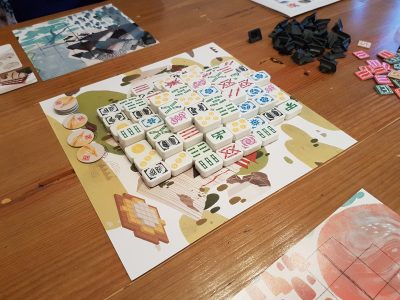 The basic rules of the game stay consistent from game to game, being adapted by Dragon & Spirit cards. On a turn a player can do one of 4 actions, with the fourth only available late in the game. The first three see a player taking at least one tile from the top most layer of the central castle. When drawing a tile its long edge must be exposed for it to be available, limiting the choice. Each tile is part of a coloured set, with the majority of tiles being numbered from 1 – 6. 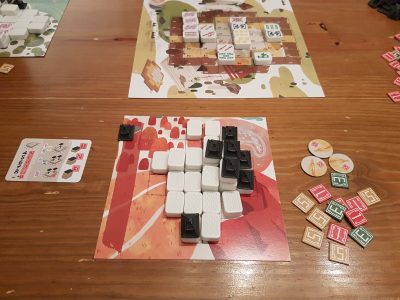 Consolidating is how most of points will be earnt during the game. Point aren’t always per tile, with 4 tiles scoring 2 points while 8 tiles or more scoring 1 point per tile. This means it is often worth making odd patterns before linking more than 4 tiles together. Consolidated tiles are flipped upside down and then depending on the rarity of the tile’s colour either one or two shrine roofs can be placed. Shrines block spaces for future placement but score points at the end of the game depending on their height up to a value of 3.

Finally, when the central tower is only 1-layer high option D “Summon the demon” becomes available: this equates to taking a countdown token. These gain the player 2 victory points but also bring closer the end of the game. Depending on the player count a number of these tokens are placed at the bottom of the board. Drawing right to left when the final token is selected, unveiling the “!” symbol, the game end is triggered with everyone getting one last turn up to the starting player. 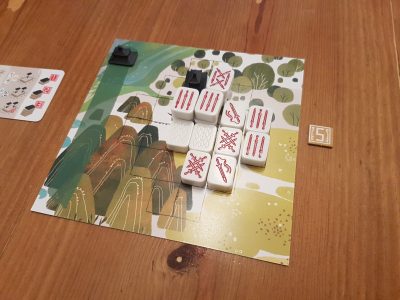 If you are playing a basic game this is the extent of the rules, so you would then count up the victory points earnt from consolidating, countdown tokens and shrines. This basic gamemode is ideal for getting the game to the table with new players but by adding just a little extra content makes each game have a unique feel. During setup, once the central structure is built, there’s the option to randomly draw a Dragon and a Spirit card.

These truly add to the replayability by minutely adjusting the way the game plays and the objectives of the game. Each category, Dragon and Spirit, has ten cards with one of each being used in a single game. To activate a spirit’s power a player must discard a singular face up tile from their player board. The power the runs for the entirety of their turn enabling them to slightly break the regular rules: such as taking a piece which only has its short edge exposed or placing an additional shrine if conditions are met. While spirits effect the gameplay, Dragons effect the post-game scoring. These can see players getting bonus points for patterns of shrines and even score for non-consolidated tiles.

There is a lot of choice available despite the limited number of actions, including a slight element of push your luck for how to add types of tiles to your player board. Should you go for the quick return of consolidating 4 tiles for 2 points or spend more turns and board spaces to aim for a bigger point return? Should players attempt to go for the rarer Purple Dragon tiles or stick to the common faction tiles? These are decisions players will have to decide each game, as with the varied setup different games could see differing optimal strategies. 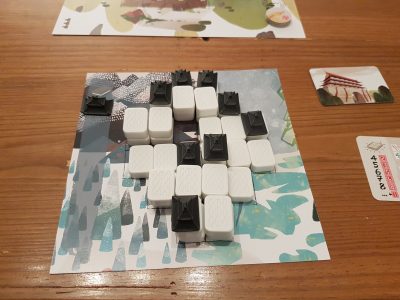 Often playing with gamers whom lean towards lighter games I love when a game offers a basic game but has the ability to thrown in a small amount of content to shake things up to make it a little more thinky. Having one communal player power rather than individual unique powers keeps players content that they have the same potential to win. No matter how strong or weak players perceive a power to be as everyone has the same, whether you use it or not is up to you. If someone else wins because of it, and you have decided not to exploit it, then you only have yourself to blame not the game.

Regardless of player count the game manages to last around the 30 – 40 minute mark. Despite there being a little extra downtime between turns the game still uses all the 116 tiles. This means each player will be getting less tiles throughout the game, making the games closer with lower overall scores. The biggest change is how much the central castle changes between turns. Which you prefer will come down to personal preference: whether you enjoy the strategic elements of a board that won’t change much or where you must react to what is available.

From a quick glance the production quality is extremely high, resulting in a weighty game box. The inspiration of Mahjong is in full flow with incredible tiles that capture the best of the twittering sparrow tiles. This theming is then extended out via some elegant illustrations, with seasonal player boards in vibrant colours. Looking past this visual treat and players will notice the same love of the artwork and feel of the tiles hasn’t been extrapolated to the thickness of any of the boards. It is a crying shame that flimsy cardboard has been used. They won’t take a pounding when playing, which could have potentially hampered the long-term robustness of the game. It still seems an odd choice: gamers will already be paying for a premium game with the quantity of plastic tiles, so why not just upgrade the boards to be premium thickness? 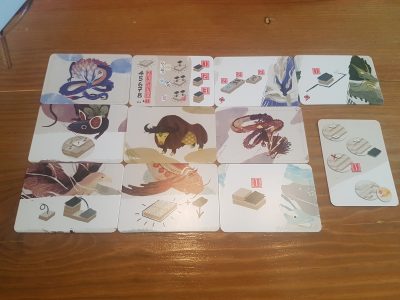 Opening the box I was surprised to find a 16 page rulebook for a game considered relatively light. No, there isn’t even multiple languages included. Instead a whole host of illustrations have been used alongside the rules makes it a breeze to read. This isn’t only helpful for reading it is incredibly helpful for teaching too. Rather than playing around with the pieces the images help to step players through the actions they can take and how to score points. The rules also have 4 pages dedicated just to the Dragons and Spirits, giving them their own sperate section for after your first basic game. A lot of effort has been spent making this game accessible via the colours used, the learn in stages design with the powers and the rulebook is an extension of this.

Despite being fantastic to hold and place there are some downsides to the Mahjong like tiles, stemming from their exact use. When piled up, or interwovenly placed on your player board, it is a bit of a pain to flip them over during consolidation. Another issue is caused by their thickness. Depending on the shape of the central castle, in the middle of the table, players will have to lean over the table to see what is available, which is a little annoying at times. These are both issues I’m fine to live with though as being able to play with these awesome tiles makes it worthwhile.

At its core Dragon Castle is incredibly simple to learn but hard to master. Though for some it looks daunting with pieces and powers, it all boils down to a handful of rules determining drawing tiles and how to place them to gain points. To make matters easier the Dragons and Spirits don’t need to be included for the game to mechanically work, and I’d recommend removing them for those new to the hobby for the initial playthrough. Afterwards though they add to the experience by making each playthrough that bit more varied. The thickness of the cardboard player boards is almost as much of a surprise as it is an issue, given the quality and robustness of the Shine roofs and chunky tiles. It is just an oddity that should have been picked up in testing. Dragon Castle is more than just a puzzle and draws players in with its table presence time and time again, thus it has earnt its space on my gaming shelf.

[Editor’s Note: Dragon Castle was provided to us by Horrible Games for the review.]