Considered by many to be the premier Japanese RPG of the PlayStation 2 era, Square Enix’s Dragon Quest VIII: Journey of the Cursed King was a revolutionary title for its time. If you happened to miss out on its 2005 debut release, you are in luck for the title has been given a chance at new life on the Nintendo 3DS, and in its conversion from home console to portable RPG the title underwent some changes that ultimately improve the core game experience. The 3DS game library has amassed quite an impressive array of RPG titles, and Dragon Quest VIII can stand alongside the best of them. This is one journey you won’t regret taking.

The narrative Dragon Quest VIII: Journey of the Cursed King offers starts off as your standard RPG fare – you and your companions are tracking the evil Dhoulmagus, whom is responsible for cursing the Kingdom of Trodain and murdering innocents. At the advent of your adventure, you are accompanied by the hooligan Yangus, the cursed King Trode, and his daughter, Medea, whom is also cursed and has been turned into a mare.

What makes Dragon Quest VIII such a delight to play is how the story evolves from a straightforward RPG to a compelling and surprising tale filled with unexpected events. A strong narrative partnered with an imaginative cast of characters makes for an entertaining and engaging adventure. When a captivating narrative is coupled with strong voice acting, the plot becomes more powerful and leaves a lasting impression on the player. Dragon Quest VIII features remarkable voice acting, and that allows the game to deliver an emotional experience that will move you and have you feeling connected to not only the characters, but to the events transpiring in the game. 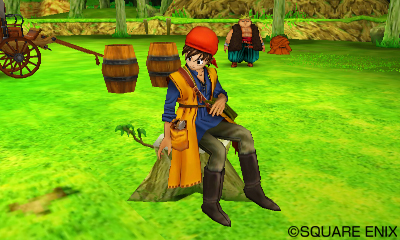 What makes Dragon Quest VIII such a portable joy is the sense of freedom the game provides and its impeccable pacing. After a brief introduction, the game opens up and allows you to explore the world and discover the secrets the environment holds. Locations are large in size, but also diverse in offerings. Whether you are traversing through a town, or navigating your way through a dungeon, the game makes you feel like you are a part of the world. It doesn’t feel like you are simply moving from location to location; instead the sense of progression feels natural and authentic.

One significant change made to Dragon Quest VIII for Nintendo 3DS is that random encounters are now a relic of the past. While the PlayStation 2 version of Dragon Quest VIII featured random encounters, the new 3DS version eliminates that encumbrance in favor of showing the enemy monsters walk around the world map. Though a minor alteration, this modification increases the enjoyment one will have with the game as it allows you to freely enter or avoid combat. If you rather focus on completing a mission or reaching a destination, you can now do so without the interruption of battle; thus making the game more enjoyable while you are on the go or when looking for a quick-play session. 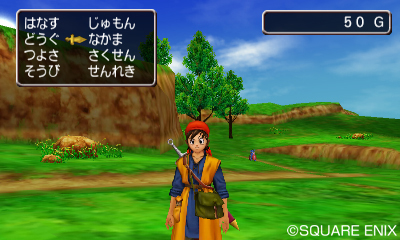 Nonetheless, Dragon Quest VIII does remain true to its roots when it comes to its battle system. Featuring a classic turn-based combat system, you select your move or skill, watch it be done, and patiently wait for it to be your turn again. If you see fit, there is an option to increase the speed in which battle is conducted. Battles can take a couple of minutes, so increasing the speed can prove beneficial when you are short on time or patience.

It was quite refreshing to return to a classic RPG battle system as this style of play emphasizes strategy over pure power. Opponents aren’t much of a threat during the early hours, but as your wander deeper into the game, the challenge increases. Proper planning and use of skills will prove beneficial while combating bosses and high-level enemies. Gaining new skills and purchasing new equipment will aid you on your quest. Usage of the Alchemy Pot is advantageous as it allows you to craft new items and equipment.

If you are familiar with the PS2 version of Dragon Quest VIII, you may be wondering whether this new version is worth a revisit. The answer is simple: Absolutely. The main game is the same as it was on PS2, but new features, extra content, and new playable characters give the game a scent of freshness. There is some new story content that expands on the backstory of key characters. Furthermore, a new type of quest is available in the form of ‘Photo Quests’, where players can take pictures of monsters to earn rewards.

The most notable additions are the new dungeons to explore, and the new characters – Red and Morrie. These two were NPC in the PS2 game, but can now be added to your party for use in the game.

Visually, the game looks impressive on the 3DS. It may not be as detailed as it was on the PlayStation 2, but the game plays and looks really nice on the 3DS hardware. The slight graphical downgrade doesn’t negatively impact the core game in any way. Dragon Quest VIII: Journey of the Cursed King is one of the best RPGs available for the 3DS. RPG fans shouldn’t miss out on this masterfully crafted gem.

[Editor’s Note: Dragon Quest VIII: Journey of the Cursed Kingwas reviewed on the 3DS platform. The game was provided to us by the publisher for review purposes.]

Matt is a freelance writer and owner of Youtube Channel - Direct-Feed Games.

The Dark Pictures Anthology: Little Hope gets a release date