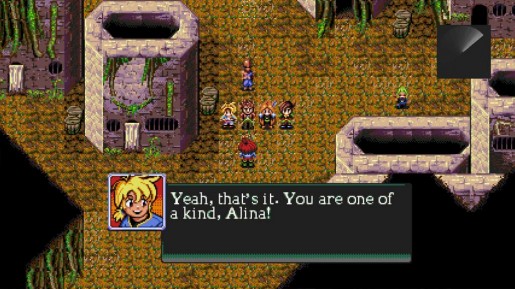 Hoston bears a map that shows a general idea of an area’s layout, but can be cumbersome to deal with at times. Navigating around a given area can sometimes be tedious with randomly placed foliage and objects that block a given path but aren’t properly represented on the map. If nothing else, I primarily used the map as a treasure radar to keep track of where a particular chest was and then get to exploring about and trying to figure out just how to reach the booty. Quite a large number of locked chests and secret paths litter the landscape, giving reason to return to an area once you’ve progressed further on into the story and gotten a particular, magical way to open these chests.

Pier Solar HD gains its namesake quite obviously for being an HD revitalization of the original title. If you’re a nostalgia buff and want the full Sega Megadrive experience, you can swap the graphics to their 16-bit originals and crank up the FM audio. The game defaults to a higher-quality set of re-recorded PCM audio and HD graphics featuring hand drawn backgrounds and updated character portraits. An additional HD+ puts an extra filtering effect on the character models, similar to that seen in Sonic’s Ultimate Genesis Collection that turns the models into a blurry mess that loses their definition and I would not recommend them over the regular HD graphics unless you absolutely hate good pixel art.

Pier Solar HD isn’t without its small share of hiccups, however. Just prior to the time of this writing, I’ve encountered a very small number of gameplay hindrances that effectively forced me to stop my progression and restart from an earlier save point. One was a humorous syntax error that would always take place when examining a particular wall. On other occasions, the party would become split up while traversing the environment or get hung up on a rock and lag behind. As long as I didn’t try casting particular spells and freezing the game, walking back to gather the party would fix the situation quite easily. Since then, a patch has rolled out that seems to improve stability and I’ve seen nothing hindering since the patch.

Pier Solar harkens back to a simpler time in gaming, when games were just as much a labor of love as they are today. A time when seeing Vic Ireland and the Working Designs symbol on the box meant a promise of quality. Nostalgia trips that can take one back to those infant years of Japanese role-playing can always be a welcome addition to my library, and I commend WaterMelon for their work bringing that sense of being to fruition with Pier Solar and the Great Architects.

[Editor’s Note: Pier Solar and the Great Architects HD was reviewed on the PlayStation 4 platform. Review code was provided to us by the publisher.]