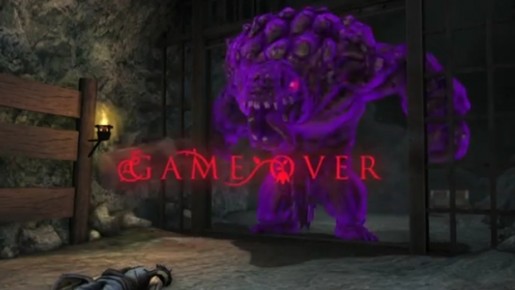 There’s rarely a game that just doesn’t click with me after repeated attempts. The closest I’ve come was Resonance of Fate, but even that took a bit of abstract thought and different approaches to battle before the mechanics finally set in. NAtURAL DOCtRINE, on the other hand, took twenty hours of my life and quite a few restarts and checkpoints. After each story mission, a number of mines and other environments open up for a modest amount of grinding and equipment, but none are any easier than the story missions they preclude. Even the very first mine you enter features a group of goblins that outnumbers you three-to-one. Should you break through them and make it to the end, there’s an conspicuous looking jail cell hidden in one of the alcoves. The one time I let the curiosity get the better of me, I pulled a level to open the cell door only to be greeted by a large troll that got an immediate attack of opportunity and smacked me down with an attack that took off more than triple my max HP.

Another unique feature to NAtURAL DOCtRINE is the inclusion of an online multiplayer mode. Rather than working with the team you played in single player, you can draft together a small four-person team (with a four-member sideboard) from a random assortment of card packs and play together in either co-op campaigns or versus battles. At the time of writing this, I was unable to locate another reviewer that would be willing to join me online, thus preventing me from experiencing the mode firsthand. As part of a login bonus, I was giving a hefty bit of currency I was able to use to purchase a small selection of troop cards, including a few super rare cards and a giant golem that took up my entire reserve deck.

Visually speaking, NAtURAL DOCtRINE isn’t pushing the boundaries of whichever console you play it on. The PS4 version was largely indistinguishable from the Vita version which isn’t saying much. If you had to choose one version to get, I would opt for the PS4 release as you have the comfort of the larger screen, a controller that won’t cost you two Benjamins to replace, and the added option of Remote Play to the vita if you feel so inclined.

NAtURAL DOCtRINE is one of those few games where ‘getting good’ isn’t even an option; it’s a requirement. With an inflexible link and combat system, it will either click with you or not. If you’re a glutton for punishment and think you can take it, ignore the score you see at the top and give it a try for yourself. For the rest of you, let’s just hope you have an extra controller or two.

[Editor’s Note: NAtURAL DOCtRINE was reviewed on both the PlayStation 4 and PlayStation Vita platforms. Review code was provided to us by the publisher.]