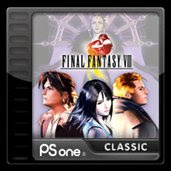 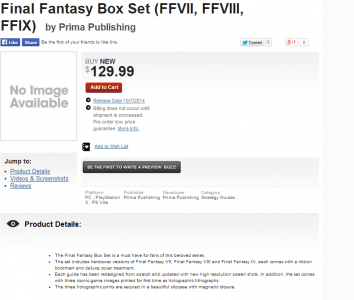 Fans of the PS1 era of Final Fantasy RPG’s would be pleased to know that Square Enix and Prima Publishing have partnered up once again to provide these classics with another collectible.

Simply called the Final Fantasy Box Set, this release by Prima Publishing includes guides from FFVII, FFVIII, and FFIX. It’s worth noting that the original Final Fantasy IX guide was penned and released by BradyGames to less than postive fanfare. This was the one and only guide to be ‘Enhanced by PlayOnline’, (then) Squaresoft’s online gaming platform. Many parts of the guide including tables were relegated online, leaving leaving the phyiscal guide with a number of holes covered with helpful messages to check PlayOnline.com for more information.

• The Final Fantasy Box Set is a must have for fans of this beloved series.

• Each guide has been redesigned from scratch and updated with new high resolution screen shots. In addition, the set comes with three iconic game images printed for first time as holographic lithographs.

• The three holographic prints are secured in a beautiful slipcase with magnetic closure.

Prima Publishing has not confirmed the Final Fantasy Box Set to date, although both Amazon (November 4th, 2014) and Gamestop (October 7th, 2014) offer conflicting release dates with an MSRP of $129.99