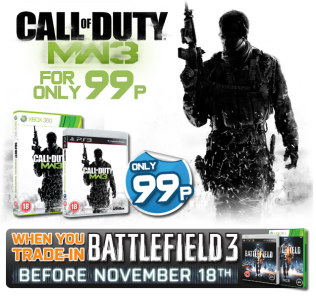 Looks like the gloves are off in the battle for the crown in the world of First Person Shooters. It seems that GameStops in the UK are offering copies of Modern Warfare 3 for only 99pence ($1.56 to be exact), as long as you trade in Battlefield 3 before November 18th. With deals like this going on, it makes you wonder just how confident Activision REALLY is about Modern Warfare 3 maintaining their place as king of the hill.