SCEE’s new “The Fight” ad was banned by the Advertising Standards Authority for being “Violent”. The picture which is posted below, depicts a man moving closer and ultimately ending in a head lock. While some complemented the ad, others pointed out some issues with it. Among the reasons were promoting Racism, and child violence… SCEE went on record saying  that they’ve “taken steps to ensure that the images were not graphic”, which can be seen with the lack of blood and actual hitting. While the ASA did dismiss the racism claim, they did find it too graphic. 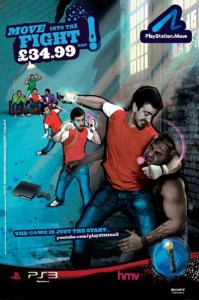