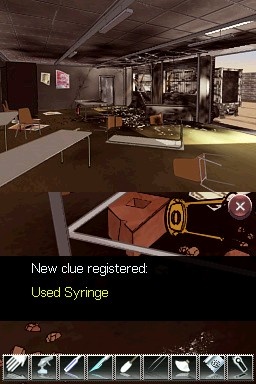 It’s not often that I find myself having to look through the instruction booklet of a game just to learn how to play it. Most games these days offer in game tutorials, and start off basic enough that even the most moderate of gamers won’t have much trouble quickly catching on to the mechanics. So you might imagine my shock when I actually flipped open the instruction booklet for “Crime Scene” just to try and figure out what the heck I was doing.

Crime Scene is a game that I wouldn’t pay much attention to if I saw it on a store shelf. Its cover art is incredibly bland, with only the title in red at the top and a fingerprint in the center, and its name doesn’t exactly scream “play me.” Everything about it just feels like an Ace Attorney knockoff, with extra violence to kick it up to an M rating and attract to gore fantatics. But is that all it is? Pretty much, there’s not much beyond the surface of this game and very few will be shocked by what I have to say in this review. With that let’s take a look at the HOT’s and NOT’s of “Crime Scene.”

Good Premise
While it may not exactly be bringing in a groundbreaking new idea, the premise for crime scene is pretty cool. Play as a CSI and investigate various different crimes scenes to help solve the mystery. The DS touchscreen was designed for these types of games, and in the hands of the right developer, such a title could provide some entertainment for a couple of train rides. The idea of Crime Scene is good, the execution however is something else entirely.

Realism
I’ve already compared this to Ace Attorney once and I’ll do it again, because these games are very similar to each other. However, Crime Scene does separate itself from Ace Attorney, by being much more grounded in reality. The tools used in this game are real, the stuff used by CSIs on real crime scenes. Scanners, fingerprint analyzers, and sound analyzers during ballistic tests are all real tools of the trade. In this regard, I have to give the nod to Crime Scene. It takes itself seriously, and offers up a much more adult approach to the genre, hence the M rating. The game needs some polish sure, but in terms of capturing the real feel of being a crime scene investigator, Crime Scene is at the top of the list. 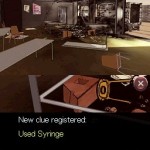 Dark Tone
Again, I’m going to make a comparison to Ace Attorney. Ace Attorney is a very bright and colorful game. The characters are fun to look at, and the overall design is a lot more cartoony. Crime scene however takes a dark and ominous tone with its settings. The locations are dark and muddy (though some of that is due to bland graphics) and even the music has a much darker style to it. The characters, while not realistic, look a lot closer to real people than those in the Ace Attorney games. Crime Scene set out to be the adult’s Ace Attorney, and in terms or realism and tone, it succeeded.

Ugly Graphics
Despite the dark tone, the game just looks ugly. The character portraits are a mix of cellshading, and realistic, and it just ends up looking awkward. The locations look ok, but uninspired. The backgrounds are all muddy and brown, with nothing really leaping off the screen. Even when investigating a crime scene, a spatter of blood on the wall or floor barely stands out amongst the rest of it. I’m not a stickler for graphics, and I certainly don’t think these are bad. But they do little to set their own sense of style, giving the game a very bland look overall.

Boring Music
I know I complimented the music earlier, and what I said still stands, but this music and overall sound design is very bland. Every tune is the same type of dark ominous tone with almost no variety. I get the style they were going for, but even shows like CSI and Law and Order offer up some dramatic tracks to help further bring the viewer into the storyline. The music here just sounds droning, and worst of all, boring. It fits the look of the game, which is bland, so I guess in that respect it succeeded. Still, some better music and better sound effects would have been nice.

Story is Meh
You’re probably noticing a pattern here. Again, yet another element that’s just ok. The story isn’t bad, but it isn’t good either. The storylines in the Ace Attorney games might verge on the silly at times, but they have enough mystery and intrigue to keep the gamer guessing until the end. The story here follows Matt Simmons, a rookie investigator who’s just been brought onto the team. Immediately when you start up the game you’re sent to a crime scene, what looks to be a murder suicide of a cop and his wife. However things take a strange turn when Matt figures out there’s more to this than meets the eye. Was it simply a murder suicide, or is there a killer roaming the streets of the city? That’s’ the basic plot, again not bad for a game of this type. Unfortunately the gameplay and writing do little to draw the player fully into the story, and the characters lack of animation just make the cutscenes look boring.

Lots of trial and error and boring gameplay
This is what I hate most about this game. As I said in the intro, I rarely if ever open the instruction booklet for a game. Most games, even complex games like RTSs, offer some nice in game tips and tutorials, and slowly ease the player into the core gameplay. Here’ you’re literally just thrown into the game with little to no instruction. The game tries to offer some tips on what to do and how to do them, but really the only way to learn is to just keep trying until you get it right. I can’t tell you how many times I broke the cotton swabs before I finally managed to correctly take a fluid sample. Once you get the hang of it, it’s pretty basic stuff. What’s worse, is once you DO figure it all out, you’ll then quickly realize just what little variety this thing has to offer. Most of the analysis mini games are little more than glorified matching games. Match the bullet size with the one on screen. Lineup and match the fingerprint scan, match the soundwaves created by the fired weapon. Match this and match that, it’s like something you’d see in a 1st grade puzzle book.

The best part about this game is actually being on the crime scenes and collecting the evidence, but even that becomes tedious and dull after a while. The gameplay isn’t horrible, but it’s not something that will hold your attention for very long. Ace Attorney may not be as realistic, but its fast paced style, and quick decision-making is what makes it fun. Crime scene simply recycles itself over and over from start to finish.

Overall, Crime Scene isn’t bad, but it isn’t good either. Its constantly repeating mini-games and bland gameplay might satisfy some, but will serve only to bore most. Nothing here is horrible, but nothing here is outstanding either. I won’t call it a good game and I won’t call it a bad game, it sort of just…is. There’s little here for me to recommend. If you’re a fan of crime mysteries, and you’ve played all the Ace Attorney games, then you might find something here to like. But the slow paced, repetitive gameplay won’t appeal to most gamers. I suggest picking up the new Miles Edgeworth game and passing on this, or at least waiting to find this in a bargain bin for 10 bucks.

The Medium latest trailer explains ‘What does a Medium do?’