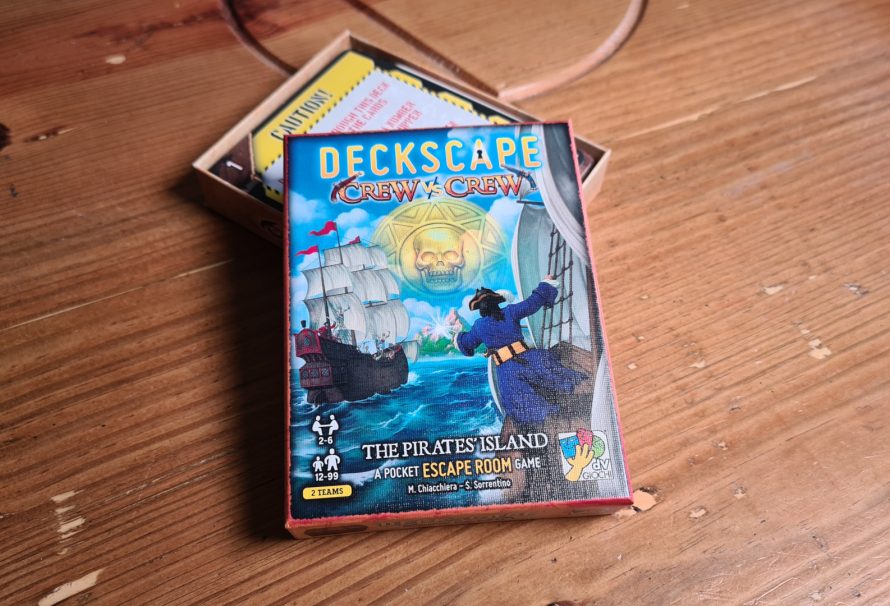 Deckscape Crew vs Crew The Pirates’ Island is the brand new escape room game from dV Giochi, which features a competitive twist! Designed by Martino Chiacchiera and Silvano Sorrentino, featuring artwork by Alberto Bontempi, the game sees 2 – 6 players solving puzzles for lost pirate gold – either player vs player or team vs team. Lasting around an hour, will you be the crew to find the treasure?

Opening the box the players around the tables are met by a single deck of large cards. The front and back cards show warnings, making sure the deck is opened from the right side and that it isn’t shuffled. With no instructions in the box the game begins by flipping over the top card from the deck and following the instructions. This instructs players to split into two even teams, even in terms of ability not necessarily numbers. Continuing on cards will depict puzzles, often with the two teams gaining almost identical puzzle cards to work on simultaneously. Throughout the deck there will be cycles of question cards, followed by the puzzle cards for the two teams and then a reward card.

Escape room style games normally give players an actual timer to see ticking down on an app or let players set their own pace. Deckscape Crew Vs Crew uses the tempo of the teams competing to be that timer. The first team to work out the answer to the puzzle shouts stop and announces their answer. If correct, the team is rewarded with a secret number of coins. This random amount will help the team towards victory. Being a random amount is frustrating as it means you could correctly solve a couple of puzzles and those successes be effectively cancelled out by a single reward later on.

A very important aspect that drives the tension, if an incorrect answer is given the coins are awarded to the other team. This is regardless of if they can crack the puzzle or not! This only makes you doubt yourself more, even when the answer is staring you in the face. Players end up running through every other option in their head to make sure that they don’t get it wrong and hand potential victory to the other bunch of thieving pirates.

When it comes to puzzles each series seems to have its own style and Deckscape is no different. Going into the first puzzle we found both teams were stumped. Sat there around the table both teams stared at the card in front of them, turning it back and forth to see the two sides and rotated it to see if a different angle would help in the slightest.

Then we all mutually agreed to admit defeat, as is allowed in the rules. If this is done no one wins the reward, but the adventure is allowed to progress. Of course, once the answer was revealed everyone got that instant realisation they had overlooked something so simple, and the game really kicked off – with everyone in the right mindset for the upcoming challenges!

The experience could fall down slightly if people start guessing solutions to get ahead of the opposition. Due to the competitive nature there is a drive to be first, as it’s the only way to win coins and win overall. Thankfully, as long as everyone properly tries there shouldn’t be an issue. One of the mini-games does use guessing and deduction and could be a fun and tense puzzle. We managed to instantly correctly guess the answer first time rather than guess and slowly work closer and closer as that mini-game intended. It caused a fair cheer for the luck of getting it instantly right, though it was therefore pure luck that put the other team at a disadvantage coin wise.

A number of the puzzles revolve around finding specific things first, and this is when the artwork shines. Full of little details, some of which will be important, the illustrations bring the events of the story somewhat to life. As it’s often the small details that give the answers away it can be easy to overlook them as you rush to finish first. However, right or wrong players often return to look at the cards after finding the solution to take in the event and artwork. With maps, pirate symbols and even a potential appearance from a large sea creature… all puzzles are kept on theme, wrapping the adventure together nicely.

Deckscape Crew vs Crew The Pirates’ Island offered a different experience from the rest of the series and it worked. The puzzle solving was retained, and worked perfectly with the rush and panic of competitively trying to determine the solutions first. There is certainly more pressure thanks to that competitive edge, whereas previous Deckscape games have been more of a relaxing puzzle solving escape room experience, free of time pressure. That shift in style may not work for some but we had a lot of fun, competing across the table. The game is of course a single play adventure, with the puzzles on the cards not changing. Still, Deckscape Crew vs Crew The Pirates’ Island was a great way to pass an hour, making playing it easy to recommend!

(Editor’s Note: Deckscape Crew vs Crew The Pirates’ Island was provided to us by Asmodee for the review. It is currently available from local board game stores! Find your local store here.)