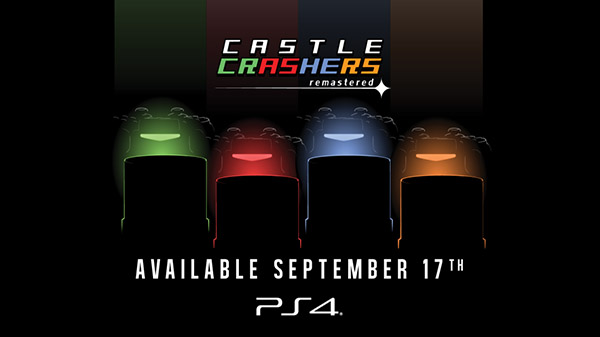 Releases on the same day of the Switch version

The Behemoth announced today that Castle Crashers Remastered for the Playstation 4 will launch via the PlayStation Store on September 17, the same day the Switch version releases.

Here’s the most frequently asked questions regarding the PS4 and Switch version release:

Where will I be able to buy Castle Crashers Remastered, and how much will it be?

When Castle Crashers Remastered launches for the PlayStation 4 on September 17, 2019, it will be available for purchase digitally in the PlayStation Store for $14.99 USD. If you’re looking for the Switch version of the game, you can pick it up in the Nintendo eShop for $14.99 USD on the same day.

What does the “Remastered” part mean?

Remastered means the game includes all of the differences from the original:

What special PlayStation 4 features are there?

PlayStation 4 players will see their controller’s lightbars set ablaze with their character affinity colors for a bright and glowing experience! And of course, you’ll also be able to play online or offline with friends for up to four-player chaos!

Is the game going to be cross-platform?

It’s not something we have in our plans. For now, you’ll have to stick to grouping up with friends on the same console, but between couch co-op and online play you should still have plenty of ways to connect!

Are there going to be physical copies of the game?

We don’t have plans to bring the game to store shelves. At launch and for the foreseeable future, Castle Crashers Remastered will only be available digitally for the PlayStation 4 and the Nintendo Switch. If we ever did make physical copies it would most likely be as part of some sort of limited edition event or celebration; regardless, we don’t have it in our current plans.