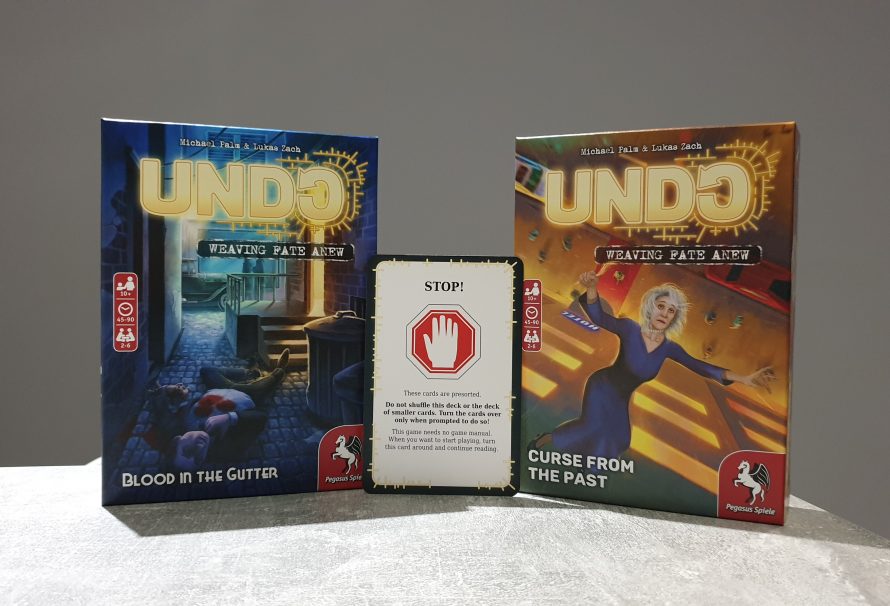 Earlier this year Pegasus Spiele released three Undo titles, cooperative board games that feature murder mystery and adventure elements. All three are designed by Michael Palm and Lukas Zach, featuring artwork from Lea Fröhlich and Lisa Lenz. We previously reviewed one of three Undo titles, Undo: Cherry Blossom Festival, and now we have played the remaining two. Both stories, Curse from the Past and Blood in the Gutter, take around 30 – 60 minutes, and are designed to be played by 2 – 6 players. However, how do these adventures stack up? Let’s find out!

Note: The next two paragraphs set the scenes of adventures, nothing past the introduction card and theming. If you want to remain spoiler free skip them to get to how mechanically the games play.

Curse from the Past whistles the time travelling players back to Belin, Germany, in 1994. A woman is falling over a hotel railing and it is up to players to determine all of the who, what and why answers. This journey takes players across a large time range and chunk of the Earth. While the event in question happens on one continent players could find themselves tweaking the past all the way back in 1355 BC in Thebes, Upper Egypt, where the Egyptian history isn’t history.

The second adventure sees players confronted with a body. Clutching a teddy bear in one hand and his tie in the other, a man has been shot in Chicago, in 1929; with his Blood in the Gutter around him – hence the name of the adventure. With various places to visit in America but also France this adventure doesn’t go as far travel wise. Left lifeless outside a bar the victim’s story and the mob culture of the era seem to be interwoven. It is up to players to work out what has occurred, tweak the events slightly and attempt to save him.

Mechanically the two titles work the same way. In front of players are 13 locations of time and space, one being the murder scene. With 9 jumps in time available, via time cards, players can not go to all of them. Players must discuss and decide as a group how to approach the events before them – given only location, date and time as information. By visiting a location new information is revealed and an ABC option is put to the group.

Before choosing players can discard 1 of their 4 clue cards to flip a clue below any event they have visited. These are small extra details about the scene, sometimes hinting to the right answer and sometimes just featuring more details. Then, the group must decide what to do of the three options. When a decision has been made the appropriate card is found in the fate deck. This fate card is flipped to reveal if an improvement has been made, players choose what originally happened (neutral) or they made matters worse.

After the 9 time cards are spent and the final choice has been made the game end is reached. The group counts the number of points awarded to them and hopes they have gained enough so that their actions saved the character. This is where players find out the most important choices, and details that players may or may not have picked up on are listed. This story card wraps up the details of the adventure and the game is complete.

The way the story starts off is the same as the box cover, which saves players painting a picture in their minds. As an illustration of the initial scene players find, it sets the scene allowing you to have some kind of understanding of those final moments. In turn, players can then project it onto the decisions made throughout their time jumps. As there isn’t any other artwork in the game it is useful how the box art can almost be wrapped into the experience. By providing something for players to visually grasp it sets everyone on the same wavelength – at least in the beginning.

While far from game breaking is was disappointing that a typo, with a name spelt two ways, was present in both of the Curse from the Past and Blood in the Gutter story decks. It made reading the specific cards with the error a bit disjointed, as a quick check was done we hadn’t missed something. The immersion wasn’t fully broken but it did take us out of the experience somewhat – perhaps something that wouldn’t occur if you’re just playing to play not make notes and review though.

Of the three Undo games available Curse From The Past was certainly the most head scratching, with discussion often going in circles. It was the only of the three that the group was unsuccessful at – albeit by only one point. The storyline was certainly there in front of us but it took a little longer to surface. Some of the reasons why specific places and times in history were present were also not instantly obvious. While this isn’t a negative against the title, not every adventure should be easy,  it may not be the best to start on as a result. Getting an understanding of how the series works so you can solely focus on the decisions would be beneficial.

After playing all of the Undo titles one thing starts impact the enjoyment of the experiences, a lack of impact. While the game suggests that all changes made are instantaneous it still doesn’t make things fully make sense. Imagine you had spilled a drink at home after arriving by bus. It would be like making sure the drink was placed somewhere else and not getting on the bus. Logically, you would expect not getting on the bus to stop the drink incident happening altogether. It is this lack of instant impact, which other one shot board game experiences manage, that leaves the experiences slightly flat, as if it doesn’t react to your choices at all.

After playing one of the Undo experiences everyone in the group was eager to get their hands on the next one. However, some of the magic about this new approach to adventures has ebbed away with each adventure all about getting a score to save a victim. Spicing up an adventure with choices locking or unlocking other events would give some much needed impact. This being said, the Undo games are interesting to play and create conversation – not just at the table during but for the rest of the game night. Of the two, Blood in the Gutter, is my prefered adventure as the theme seemed to instantly be more apparent and appealing. Those into Egyptian history however may lean the other way. Whilst you might not want all three Undo titles experiencing one is still well worthwhile.

[Editor’s Note: Undo: Curse from the Past and Undo: Blood in the Gutter were provided to us by Pegasus Spiele for the review.]