Carcassonne Safari is the fourth full game to be released as part of the Carcassonne: Around the World series. Featuring the tile placement mechanics the series is known for, this hot off the press board game is designed by Klaus-Jürgen Wrede and published by Hans im Glück. Safari sees 2 – 5 players trying to see monkeys, elephants, giraffes, lions and zebras across the savannah, at watering holes and tucked inside bush areas. However, does the game of Carcassonne work in a Safari setting? Let’s find out!

Bringing in a few thematic elements Carcassonne Safari sees scoring altered from the norm and additional pieces thrown into the mix. The standard Carcassonne style tile placement is present, thus consistent with the rest of the series, where the illustration always has to be continued – whether it is an animal path, bush or savannah. The turn phases of mandatory tile placement, optional meeple placement then hopefully scoring are also the same, though extra options are included.

On a turn players will still draw a tile and place it adjacently to an already present tile, or the starting tile if at the beginning of the game. Once the tile is down, regardless of park ranger involvement, the player can chose to put a meeple down onto a feature on the tile. The only limitations to this are the player must have an available meeple and no other meeples can be on the feature already. Aside from this placement is slightly tweaked via the introduction of park ranger pieces.

If you cover one of the two park rangers you displace them, scoring 3 points instantly. At the end of your turn you then must place the piece into an empty space next to a tile. Giving the player the choice means it is possible to chain one turn after another claiming the bonus points. To counter this if you don’t want to place a meeple on your turn you can instead move the park ranger to a different empty space. This stops one player gaining too many bonus points, though their impact is felt a lot more in the early game, than late game when the map is larger.

Where you might want to place a meeple is somewhat different than in the regular edition, nevertheless, points are still awarded when a feature is completed. Rather than the size of completed animal paths (roads) or a bush (cities) points are scored based upon the number of unique types of animals via a scoring table. This table sees small two tile bush areas often much less worthwhile, with only 1 point scored for 1 animal type. At the other end of the scale having 5 unique animals can score you 15 points, something to truly aim for!

Taking the place of monasteries of the regular edition of Carcassonne are baobab trees. This is part of a major change as these do not score any points, though are still vital to get points. Whenever you place a meeple onto a baobab tree, or a baobab tree you control is completed (all surrounding 8 spaces are filled), you can take 2 waterhole animal tokens – opening up the opportunity for a new action. 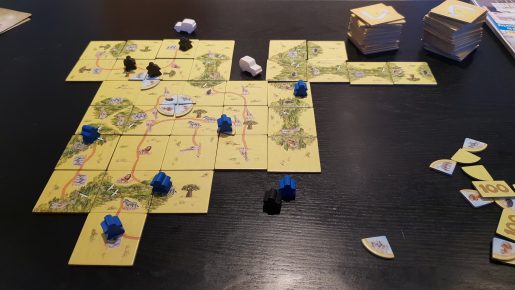 After placing a tile, instead of placing a meeple or moving a park ranger, players with animal tokens are able to place one onto an empty tile corner of savannah anywhere on the board. If digging up a new waterhole the player must place a meeple onto it. The only restriction is the each animal token in a waterhole must be unique. Points are then instantly awarded for building a stage of a waterhole – with the points increasing per stage from 3 to 6. When completed a waterhole awards the controlling player 3 points. Interestingly, while it might sound counterintuitive, due to the difference between the point earnt for placing the final token and having control it’s worthwhile finishing other players waterholes with your animal tokens.

Play continues clockwise around the table with players at a minimum playing a tile each turn. When the final tile is played the game is over and a few final points are scored. For incomplete animal paths and bush areas controlling players score one point for every animal, regardless of type and including birds. Meeples left on baobab trees and water holes do not score anything. Summing these points up with what was earnt during play, the winner is whomever scored the most.

Scoring being moved away from just length or size makes logical sense for Carcassonne Safari. When bouncing around the savannah in a jeep I doubt many care how long an animal path is, or the size of a bush area, if they don’t see anything. This does, unfortunately, open up the possibility for even more luck from tile drawing than in the regular version. While in the original you can luck out on the tile design, or having a bonus scoring shield on a city, in Safari if you only draw a couple of animal types while your opponent gets a range you can see yourself slip behind, through no fault of your own. Starting the game with a type of animal token may also help to mitigate the luck side of gaining these early on via a baobab tree. 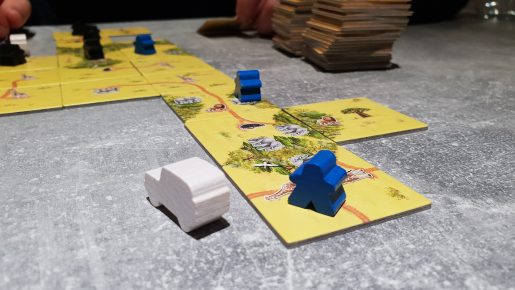 Complexity wise this is a touch above regular Carcassonne, due to the additional choice of park ranger movement and the potential action of waterholes. These are far from analysis paralysis instilling options though, keeping the family friendly feel to the game. Matching this family friendly vibe is the artwork on the tiles; alas, the only real “flair” like details being the animals themselves. In spite of this, once a few tiles are alongside the 3×1 starting tile the savannah starts to take place and naturally grows throughout, into a somewhat pretty and thematically empty map.

The best components have to be the elephant and park ranger pieces, that add some fun to the scoreboard and main game areas respectively. The tiles themselves are of standard quality, with no issues during punching them out or from play. As expected, they all have the same backing and therefore shuffle easily – with no indication of what will be drawn next. The waterhole animal tokens are the perfect size to fit the tiles, have a meeple fit on them and not be fiddly – an almost surprisingly quality. It might be the tiniest nitpick but it would have been a nice touch for a baggie to have been included for the waterhole tokens, as without one they rattle around the box. Most gamers will have spare but it is a pet peeve that games come without them.

Carcassonne Safari is an interesting twist on the base game of Carcassonne. It distances itself in a number of ways, via scoring and the visual appearance, and each of these changes work. Players will have to play differently to score big, with the use of tiles somewhat altered – depending on what animals are featured more so than shape. The strengths of the original, being a fun, fast, family weight title, all carry through. Alas, it is a shame the luck based negative of drawing tiles is exaggerated.

[Editor’s Note: Carcassonne Safari was provided to us by Asmodee US for the review.]