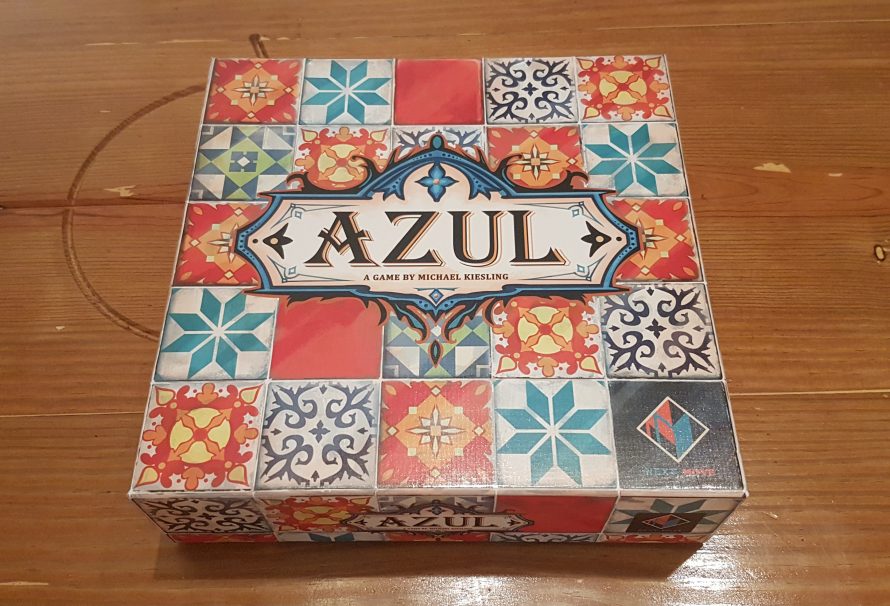 Azul from Next Move Games and Plan B Games is an abstract strategy board game for 2 – 4 players. Designer Michael Kiesling has created a tile placement pattern building game where gamers take up the roles of tile-laying artist, whom must decorate the walls of the Portuguese Royal Palace. With bright colours and patterns the game stands out but is it style over substance or brilliance? Let’s find out!

To set the game up each player will grab a personal player board from the box and a score tracker cube; the first player marker is assigned to a player (the rulebook suggests whomever last visited Portugal), the rest of the tiles are poured into the Azul bag and a number of coaster like Factory tiles, determined by the player count, are placed within reach of all players.

At the start of each round, the starting player blindly draws four tiles from the bag for each of the factory tiles. Once complete players will take it in turns to either draw all of the matching colour tiles from a factory tile (sliding the rest into the middle) or taking all of the matching colour tiles from the middle. The first person to draw from the middle each round also claims the starting player marker for the next round and places it onto their personal player board on the next free floor space.

Once tiles are selected players must add them to the pattern line side of their player board, if possible, whilst following some placement rules. Firstly, each row of the pattern line must have a unique colour tile. For example, if you have 3 blue tiles placed on the 5-space row additional blue tiles must also be place on that row. Secondly, if you have placed a tile of that colour on the wall side of that row, it also blocks that colour being placed. To understand this last rule you’ll have to know what happens at the end of each round, when all tiles from both factory tiles and the middle have been claimed. If you cannot follow these rules you’ll be placing any excess tiles onto the floor spaces.

All tiles have been claimed and it is time to finish the round by scoring. If you have filled each free space of a pattern line row then you slide a tile across from the row onto your wall and it’ll score points, with the rest of the tiles in that pattern line row being discard to the box. Tiles score points according to how many in a line it creates in row and column separately. So, if the new tile creates a connected line of 4 tiles horizontally and 3 vertically it scores 7 points. If a pattern line is not complete the tiles stay there for the next round. Post-scoring players must then subtract points determined by the number of tiles they have on their floor. Thus, taking the first player token loses you points.

With no number of set rounds, the game continues with new tiles being drawn from the bag. When the bag runs out of tiles the discarded tiles in the box are tipped back into the bag and the game continues. The game ends at the end of a round when a full horizontal row on the wall is completed by any player. Bonus points are then awarded: 2 points for a completed horizontal line, 7 points for a completed vertical line and 10 points for having 5 of the same tile type on your wall. As expected the player with the most points wins! 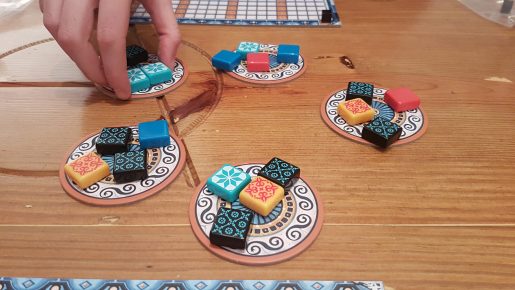 From one turn to the next the rules are extremely simple, boiling down to taking matching tiles from somewhere and adding them to your pattern lines. As the game progresses the way your board builds up makes things harder, and soon both points and large amounts of floor tiles can build up fast. There is a sense of trade off gameplay in Azul. A prime example is how taking from middle first gets you first choice in the next round but also loses you a point.

The trade-offs extend though, due to the floor based negative points. Whether on purpose or not, the round ending decisions often boil down to what will hurt me less, which in turn often sees your opponent, whether you meant it or not, lumped with something they cannot use; thus, losing them points. This places Azul into a category that sometimes has bad connotations, of a take-that game. Players can calculate optimal decisions not only to bag themselves points but also make others lose huge amounts, something prevalent no matter the player count.

Another aspect which will leave players thinking about how best to complete the puzzle are the end game bonuses on offer. With three different objectives players can choice to try to end a game of Azul quickly or build up greater point scores. If a player speeds through to complete a horizontal row not only will the game end quick but it can stop others gaining large point swings from bonuses. It depends if you not only spot the bonuses others are going for but can also react accordingly to stop them. This drives interactions between players despite everyone building on their own separate boards. 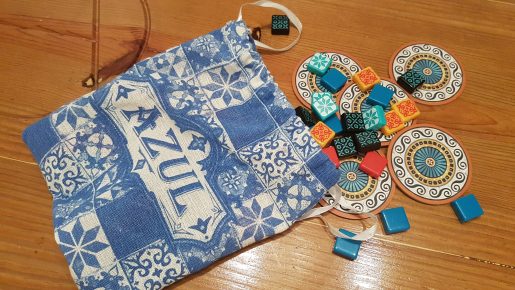 It will come to no surprise to those engrossed in the hobby, the components of Azul are phenomenal. The thick, chunky tiles are amazing to mix up, as they rattle around with satisfying chattering, much like Mahjong tiles. Then there is the drawstring “Azul” emblazoned bag, that the first player will be drawing from. Considering it is only used once a round there is no need for it to be the quality it is but this just shows the love the designer and team behind the game have put into it, making sure nothing lets the production quality down, instead elevating the title at every opportunity. The only oddity when it comes to the components is the fact the red and dark blue tiles feature no pattern on them. They do stick out slightly from the other three but perhaps this is on purpose to just keep that extra splash of colour in the game.

Initially I was confused why a different pattern wasn’t utilized on the reverse side of the player boards, instead of just grey. Once I understood Azul and noticed how this wouldn’t affect the game I embraced the grey side for its fluid placement potential. When using the variant grey side when you slide tiles from the pattern line onto the wall you can choose which column to slide it to, though the limit of one colour per row and column still apply. It isn’t an entirely different game but just adds to the player choice and often means slightly higher scores.

Azul cannot be faulted on production quality, ease of play or the entertainment it can provide. Some will perhaps be put off but the slightly cutthroat take-that actions that tend to occur at the end of rounds but accept this gameplay and players can be as much of an *insert profanity here* as they want. Before long even the most timid players will be concealing grins as they purposefully make you pick up a handful of unusable tiles, inevitably losing a floor full of points. Just when you think you’ve cracked the Azul puzzle another player’s strategy will pay off. It is this intrigue that keep players coming back for more and I’m sure the want to play will continue for many months, if not years to come!

[Editor’s Note: Azul was provided to us by Asmodee UK for review purposes. The game is currently available on 365 Games for £35.99. It is also available from local UK board game stores, find your local store here]