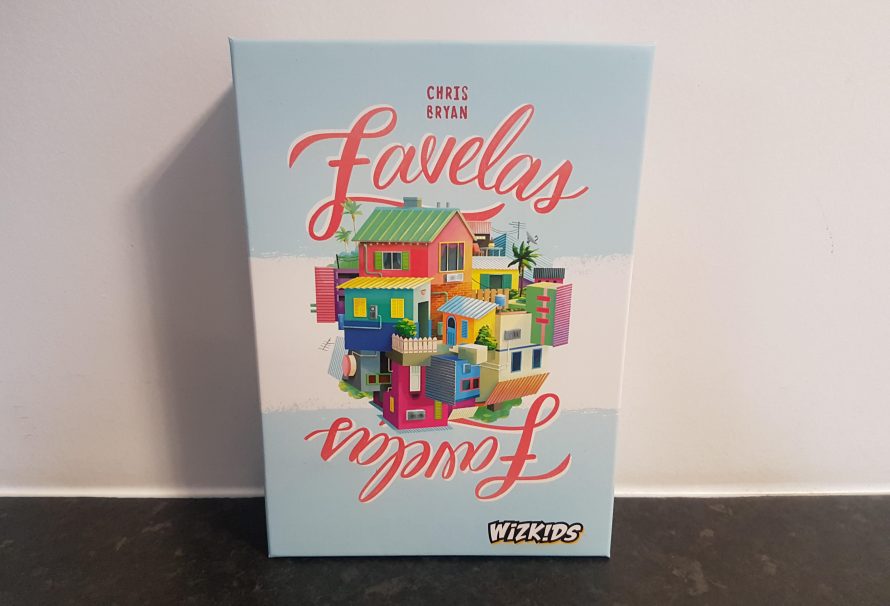 Favelas, released towards the end of 2017, is a tile placement board game with hints of dice influencing mechanics. Designed by Chris Bryan and published by WizKids, the game sees 2 – 4 players using hexagon shaped tiles to construct a colourful interpretation of the Rio de Janeiro favelas. Taking around 20 – 25 minutes to play on average, is this a puzzle game to get stuck into? Let’s find out!

Favelas is an extremely quick and easy game to both play and teach. At the start of the game each player gets a player board, places their marker on 0 on the council board point tracker and someone rolls the dice to give colours starting values. Three piles are constructed, one for each of the three rounds. Each pile containing a set number of tiles, determined by the player count, with an end year tile randomly placed into the bottom four tiles. The top three tiles of the first pile are turned over and the individual hexagon pile is put within reach of all players.

During a round players have three available actions: select one of the face-up double hexagon tiles, pick up the top face-down double hexagon tile or take the top face-down single hexagon tile. If a single hexagon is chosen the player must adjust the clear bonus die, by altering its value either up or down by 1. When playing a tile onto your personal player board it can cover any colour below but a tile must be all on the same level and cannot expand the size of the player board. If a colour hexagon is placed directly on top of a hexagon of the same colour the player must adjust the dice of matching colour by 1. When adjusting the dice they cannot go above 6 or below 1, so when at 6 the only option is to drop its value to 5. 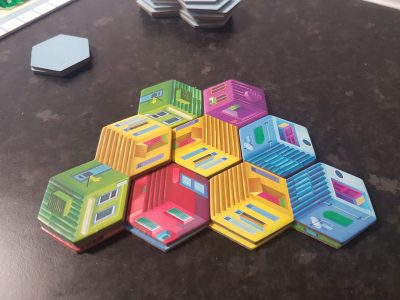 Play continues clockwise around the table with players taking one tile at a time until the Year End tile is unveiled. At this point play is paused for scoring. Go through each colour and determine the player, or players, with the most hexagons of that colour on their player board, not counting covered hexagons. Whomever has the most of that colour scores the points on the dice. For example, if the purple dice ended on 4, Player A had 3 purple hexagons and Player B had 2 purple hexagons, Player A would be awarded 4 points. The clear bonus dice points are awarded to any player which has all 5 colours on their player board.

Once the scoring is complete the unused double hexagon tiles are removed from the game, the next pile is selected and the dice get re-rolled. The next round then starts and play continues until all three rounds have ended and the winner has been crowned. The aim is simple and the same each round: attempt to gain the most hexagons of a certain colour and influence the dice to score yourself more and your opponents less. The most complication arises from players not being able to visualise how the points scored for a colour might change as the game progresses. 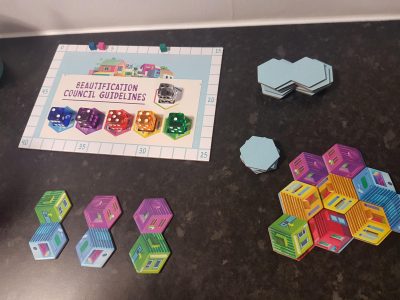 Favelas is simple to play and this simplicity starts from the well-structured and written rulebook. It’s a rulebook which doesn’t take itself entirely seriously, though steps through setup, actions and scoring logically. As an example of the way the rulebook makes itself easy to read here’s the rule for whom goes first: “The person who has most recently been to Rio de Janeiro goes first. If this results in a tie, put the game away and never play it again. Or randomly pick a starting player.”

The way the dice are rerolled each round is a great curveball mechanic that helps to limit a runaway leader scenario. Suddenly the colours players were fighting over to control, worth 5/6 points to the player with the most, can become almost pointless to have any of. This makes it an interesting trade-off of when to cover up a colour. You may know that you’re giving an opponent the majority of the colour while striving for another. This sense of risk is only increased if you’re behind points-wise, as you pray for the right tiles to come up to swing victory your way.

Due to the way the final four tiles of each stack are shuffled players don’t know exactly when the round will end. This makes it slightly risky to run strategies such as attempting to get a game to finish quicker by always drawing double tiles, or burning through as many singles as possible to put the end of the round off. One potential issue with this is that players will not have always played the same number of tiles in the game. Some will see this as a potential advantage to have placed more, especially if it ends up being the same player finishing round after round. 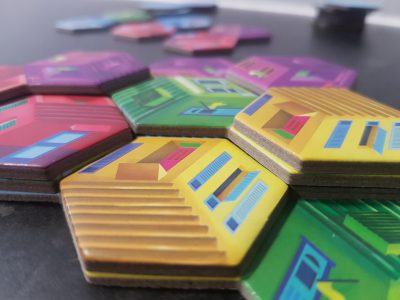 The concept behind taking a tile and placing it, potentially adjusting the value of a colour, is a simple one. Alas, the same players that slow other puzzle games to a plod, due to analysis paralysis, will become the bane of Favelas. There is definitely the opportunity to think long and hard about what the ideal move could be, calculating potential scores. As usual, for most the fun starts to leave the table when the long waits between turns mount up. If it becomes an issue get a timer out, agree a maximum time per turn and then the speed will pick up.

Going into Favelas a couple of my initial assumptions were wrong. I expected a sprawling estate of the cramped housing to flow across the table, instead the puzzle is extremely compact enabling it to be played on much smaller surfaces. The second assumption was that players would gain more points for large zones of a colour, similar to Kingdomino’s scoring of crowns multiplied by linked matching squares. As points are only determined by the amount of each colour I feel an opportunity has been lost. Either a tie-breaker, for when more than one player has the highest number of a colour, or an advanced variant, where connected sections of a colour come into play, could have been included. Something extra might just keep the game on the table for a little longer.

As expected from the artwork on the box, Favelas is an extremely bright and vibrant board game. As tiles are placed instead of colour spilling out across the table, it grows upward. After construction what is left in front of players is a modern artwork of shape and colour, abstracting away the issues of living in a favela for a family audience. Using the designers word, it is a “beautification” that is more of a celebration of the colours than about the hard-hitting reality. There is enough of a vague link in the way the tiles stack up to give different heights for the game to be called Favelas, but otherwise the theming is thin at best, despite the epic colours. 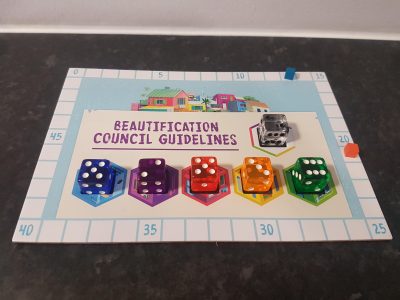 One slight niggle is that the tiles feature yellow buildings, the council board has a yellow outlined hole for a die, yet for some unbeknownst reason the dice is orange. It is such a small thing but it catches your eye when playing, and it stands out as odd. To make up for this oversight the dice are chunky and feel good to roll, even if this only happens a handful of times a game. Following on the robust production quality, the thickness of the tiles is brilliant, it is almost the equivalent of two Carcassonne tiles on top of each other. Favelas should comfortably last many a playthrough issue free.

In a similar way to other puzzle games, Favelas uses the same tiles and the same scoring system each time, with the only variation truly coming from the order the tiles come out the box. While there is a little extra added in via the rotating of the dice for the scoring, and a slight tile difference for lower player counts, players will essentially be trying to solve a similar puzzle each time. This doesn’t make the game inherently bad, people all around the world do Sudoku puzzles every single day. For some gamers Favelas will only stay at the table for a few games before becoming samey, while others will appreciate the puzzle nature of the game and will periodically return to crack it again. It is more visually appealing that the likes of NMBR 9 though owning both, despite their differences, is a bit of a stretch for me, and a race that Favelas wins.

[Editor’s Note: Favelas was provided to us by Asmodee UK for review purposes. The game is currently available on 365 Games for £34.99. It is also available from local UK board game stores, find your local store here]