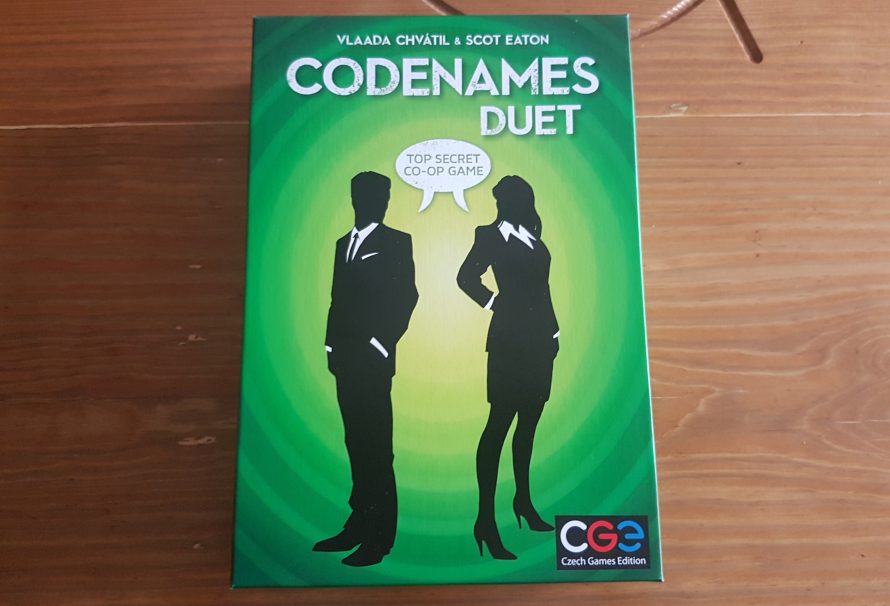 Codenames: Duet is the brand-new word deduction game from Vlaada Chvátil and Czech Games. Despite keeping the core guessing mechanics, which the franchise is known for, the gameplay has been somewhat flipped on its head. This time around they players sat across the table must work together for the victory. 15 agents are out there in the field ready for you and a teammate to contact. However, should you be contacting a friend to play straight away or should you try not to be associated with this word game? Let’s find out!

Note: Codenames: Duet is a completely standalone title. Nevertheless, if you are unaware of the franchise you can check out Just Push Start’s review of the original Codenames here.

Setup will be very familiar to those whom have played any of the previous versions of Codenames. A 5×5 grid of words is randomly generated, after shuffling the deck of 200 double-sided word cards. These represent the potential Codenames that you will be working with your teammate to link and guess. Like in the original, a key card is taken from the box and placed in a card holder. The difference is each player looks at differing sides of the card, that are not identical.

Of the 25 words in front of the players there are 15 correct answers. On each side of the key card is a 5×5 grid matching the words laid out on the table, indicating via colours what those words are. There are only nine of the correct answers shown on each side, alongside three assassins and thirteen innocent bystanders. If at any point your teammate guesses any of the assassins, it is instantly game over. This certainly adds some risk and tension to the game, as you fear making dodgy clues that the assassins could be chosen for. The bystanders aren’t quite as bad, but stop the player guessing, ending that turn.

The interesting twist is that only one of the three assassins on each side of the card is in the identical position on both sides. This means that on your side a word may be marked as an assassin, losing the game if your teammate guesses it. However, on your teammates side could be a word you’ll need to guess to win the game. A few players not used to Codenames have been slightly confused with this feature. After a round they were up to speed, being sucked into the entertaining world of agents and assassins, wanting to play more!

Players will take it in turns coming up with word association clues for their teammate to decipher. With only nine rounds in which to complete the game these cannot often be clues for singular words. Players must come up with a word that links to multiple correct answers, whilst not being any bystanders or the deadly assassins. Tenuous links and potential in jokes will start to surface as soon players resort to link 3 words together with only a single word and number. For example, a player could say to their teammate “Roast: 2” to link Christmas and Potatoes. The logic would be roast dinners are eaten around Christmas time and you get roast potatoes.

Choosing a word at a time, if the teammate is correct the word is covered by green Agent token. Guessing can then continue up to the number said plus 1, until either an assassin or bystander is chosen. In the example of “Roast: 2” the limit would be 3 words. This plus one is an extremely helpful rule that has been carried over from the original. If you have guessed a bystander in a previous round, then you can use this plus one guess to go back to that clue and attempt to mop up a missed answer.

At the end of a turn one of the timer tokens is taken. If all successful, the spymaster takes the token and puts it green tick side up in front of themselves. If any of the bystanders are hit the token is instead put onto the incorrectly guessed word. This still uses up s precious timer token up but makes sure the same word isn’t guess by the player again. Note, it is perfectly possible that the word is a correct answer for the other player. 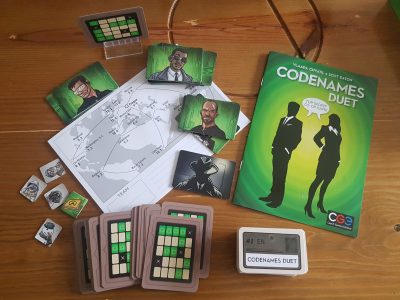 The game ends when the final token is used, so you can occasionally squeeze in a lucky last round to win the game. It is even possible to go for a lucky dip and guess the final few answers if your teammate says a high enough number with their clue. This often ends badly but the cheers of joy when it somehow works makes the attempts worthwhile. At this point the players have either won or lost together. Setup for a second game is then extremely easy, removing tokens from the grid, flipping the words and grabbing a new key card from the box and players are ready to go.

The same gameplay of the original game holds up extremely well, considering the shift from a competitive to cooperative board game. The essence of the game is still shining strong. This is most likely due to the team based gameplay, that was partially present in the series before, being brought to the forefront. People have made custom variants of the Codenames games to be able to play with fewer players. This official version isn’t just a nod to them it takes the idea and adds some interesting twists. This creates a game that clearly shows the designer has spent time honing and perfecting before unleashing the entertainment to the world.

With a total of 400 words in the box there are plenty of 25 word combinations to be made. On top of this, they come in the same design as the original Codenames cards. This means Codenames: Duet can integrate with the base game of Codenames to effectively act as a word deck expansion, or vice versa. Treating the game like this, at £16.99, in my eyes would be a very expensive expansion, unless you’re constantly getting the game to the table. It is more a nicety that all the works can be used, enhancing both titles.

Included in the box is a map for players to work their way around. This can change the game rules up and add some difficulty when the basic game starts to become easy. This can involve being able to only choose X number of innocent bystanders otherwise the game ends. Apparently, I am never of the same wavelength as my friends or family members as the base game is often hard enough. However, there are some whom have some kind of physic link that can get every clue given to them. This is however what this game is built for: a couple of good friends, significant others, family members or those looking to work out how someone else thinks. If there isn’t a friendly “How did you not get it?!” argument at some point you haven’t truly experienced Codenames: Duet. 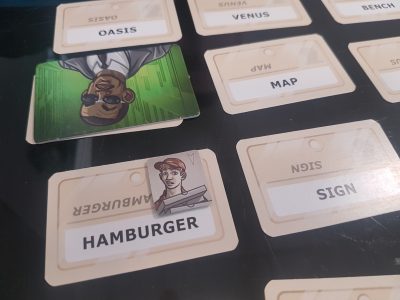 The side of the box suggests that Codenames: Duet is for “2 or more” players. With two players, the new ruleset, for the Codenames franchise, shines. I cannot recommend playing with player counts above this. Despite it being possible there are glaring issues when more than two try to play. While the game is cooperative players cannot freely discuss the words, or the link making thought process. This makes it awkward to have multiple players on either side of the card. Perhaps this would work with parents helping their kids. Alas, as soon as someone says a word too loudly when discussing the whole concept of Codenames collapses.

Conversely, I can thoroughly recommend Codenames: Duet if you’ve found yourself wanting to try out the original Codenames but rarely play with more than 2 players. The gameplay hasn’t drastically been changed and thus the core mechanics have remained intact. You get the same satisfaction from giving great links and guessing those tenuous ones as before. Codenames: Duet will certainly get a lot of playtime and for many will become one of their go-to 2 player games. It has not only done the franchise justice, it will open up the door for more people to enjoy Codenames.

[Editor’s Note: Codenames: Duet was provided to us by Czech Games for review purposes. It is available from local UK board game stores, find your local store here]