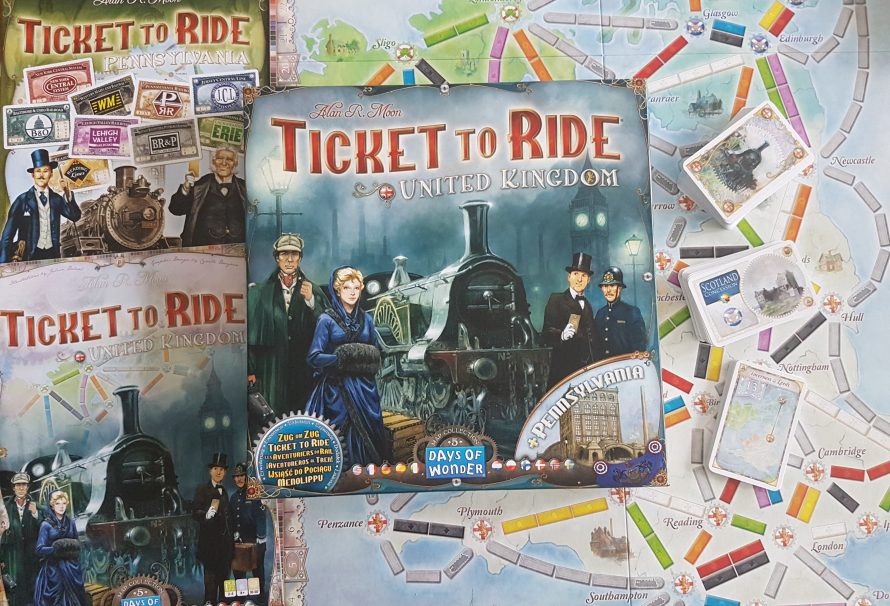 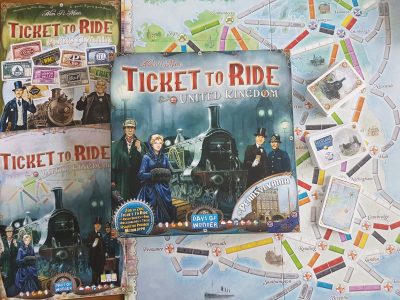 To play Ticket to Ride United Kingdom players need either the original US based Ticket to Ride or Ticket to Ride Europe. With just this one additional expansion gamers can increase their count of game boards from 1 to 3, trebling the amount of content. Each and every Ticket to Ride map plays differently; through differing ratios of long and short routes, the number of trains available for players, the ways to score bonus points and with the United Kingdom version even the rules for train placement are altered. Unlike other versions of the iconic train game where players can claim any route on the board from the offset players must first purchase technology. 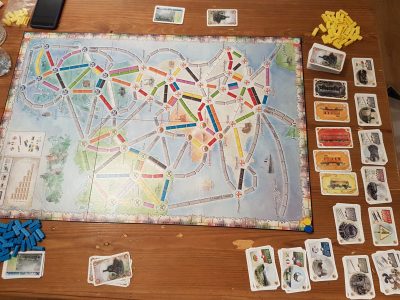 At the start of the game players are not able to build ferries, build routes longer than 2 carriages or build routes outside of England. They also have a reduced number of train carriages to place down, with players only starting with 35 (45 being normal). To further the unique twist players also start with a locomotive card, something that is almost a necessity for the game to start of evenly for all players. The importance of this locomotive card is that players can on each turn, before any actions are made, spend a locomotive or 4 random train cards to purchase a technology.

These technologies enable players to build longer routes, into other countries within the United Kingdom and Ireland or even obtain bonus points for routes. The ruleset of the United Kingdom certainly steps up the difficulty of the otherwise family friendly franchise. Even those whom have played the base games numerous times will be slowed down by the new rules. With this slower gameplay player choice is emphasised. 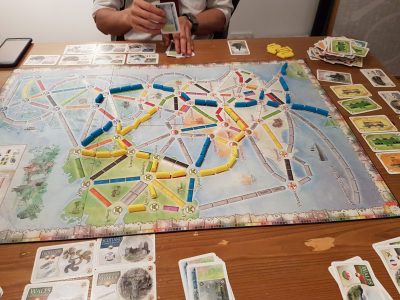 For example, if you don’t have a destination ticket that involves Scotland you could choose to completely ignore it. Allowing you to save the locomotive card to spend on something else. One choice for early on in the game is whether to purchase Booster for 2 locomotives. This is a large cost when players have less cards and could see them falling behind heavily against aggressive route claimers. On the other hand, for the rest of the game they would need only three random train cards instead of four to use them as a locomotive. Long game tactics don’t always pay off but can choose whether to try for it or not.

The major reason I wrote above that this map pack can triple the available content, coming from owning only a base game, is because the reverse side Pennsylvania isn’t just a new board. Again new, yet different, mechanics are added to the base rules of Ticket to Ride. Pennsylvania does play a lot closer to the usual Ticket to Ride experience we all know. Even using all 45 carriages unlike the United Kingdom game. Players are able from the start of the game to build any route as long as they have the set of coloured train cards required, and a locomotive is naturally needed for building one of the two ferry routes. 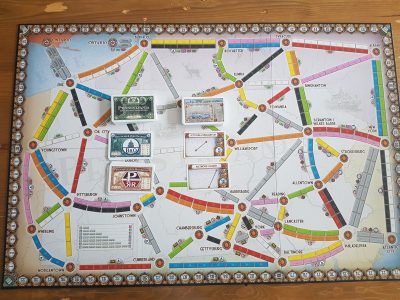 The only change from the base game is that after claiming a route, players check along the route to see if they can take a Share option. Different routes have different share options and a few don’t have any at all. When you claim a route, you can take single share option card matching a symbol adjacent to the claimed route. This is a much less thinking intensive change compared to the United Kingdom rules. It is more of a bonus structure than a re-write of the rules. At the end of the game players reveal the share cards they have collected. For each share option players determine whom has the most, who came second, third, etc. and points are awarded accordingly.

The trick is some share options are more widely available and players can see when a lot of a certain type has been taken. This adds an interesting dynamic where finishing destination tickets doesn’t always become the most points effective way to win. A tiebreaker is in place for if two players have the same number of shares, effectively giving an advantage to the player whom first took that share option type. This means there is never a draw. It is possible for some share options for not all players to get points. For example, the Western Maryland Railway and the Jersey Central Line, only the top two players to gain bonus share points. So players must be careful which shares they try to collect! 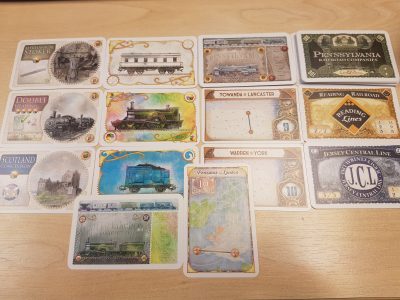 Potentially, because it preserves the simplistic family-friendly side of the base Ticket to Ride experience, and despite it being the United Kingdom map pack, I preferred the Pennsylvania side of the game board. The United Kingdom rules try to change to much in one go for its own good. Ticket to Ride just isn’t a game I look to for a complex board game experience, there are plenty of other games out there that tick that box already. The United Kingdom board is for 2 – 4 players however it seemed to run easier with a max of 3 players. Partially due to keeping track of what routes others can or can’t build, with a lot of communal double checking if route could actually be claimed. This doesn’t mean I won’t play the United Kingdom board again but if this map pack hits the table it will, nine times out of ten, be Pennsylvania that’s played as it provides plenty of non-muddled enjoyment.

[Editor’s Note: Ticket to Ride: United Kingdom was provided to us by Esdevium Games for review purposes. The game is currently available on 365 Games for £24.99. It is also available from local UK board game stores, find your local store here]