Arc System Works has made a name for themselves through Guilty Gear and more recently BlazBlue. Even though BlazBlue wasn’t as complex as Guilty Gear, it quickly grew to be one of the most popular fighting games around. Now that the latest title, BlazBlue: Central Fiction is out, is it the sequel fans have been waiting for or is it a quick revision for easy cash?

Taking place after the events of BlazBlue: Chrono Phantasma, BlazBlue: Central Fiction feels like the end of the series. Questions are answers, choices are made and there is a sense of finality to everything that takes place. While the ending suggests the story will continue, it serves as a good capper to a very convoluted and confusing arc.

For those disappointed with this possible development, rejoice in the fact the story takes roughly six hours to complete and even then you have all the side stories and additional stuff to view. Fans and newcomers alike can make use of the included glossary that explains previous events, character motivations and more. There is a little something for everyone, even if it takes a bit of time and effort to get the most out of it.

In addition to the beefy story, arcade offers even more dialog and detail too. With each character having up to three additional storylines, complete with special CG and new information, it gives those interested in the story or more offline content plenty to be excited for.

If story isn’t your thing, BlazBlue: Central Fiction has a number of other modes too. Like previous titles there is a decent tutorial that explains the basics in a way anyone can understand. This can be a little dry for some, but certainly worthwhile for anyone remotely interested in learning how to play. To further your training you can use the training mode or try your luck with challenge mode. 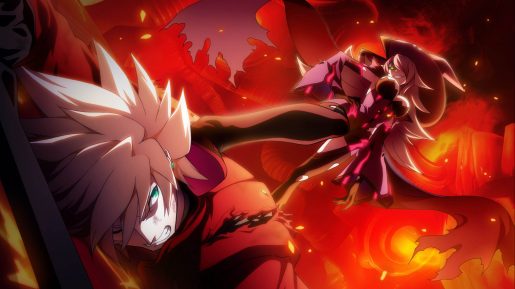 Here you’re asked to perform various combos in hopes you learn things like timing and your characters ins and outs. There are a fair number of challenges, with additional difficulties to further your mastery, making it a solid mode for newcomers and fans alike. The only downside is that training doesn’t seem as newcomer friendly as Guilty Gear. The most basic tutorials seem to be missing and character difficulties seem to go unmentioned. This means very little in the grand scheme of things, just keep in mind that there is less handholding.

Once you’ve learned how to play or want to dive into the real content, there are a couple modes to experience. As previously mentioned, there is an arcade mode and story features a couple fights too. Besides those are versus, grim of abyss, score attack and speed star. Even though versus and score attack are self-explanatory, the other two modes are a little more complex.

Grim of Abyss mode is BlazBlue: Central Fiction’s quasi-RPG mode. You face enemies, they give experience and items, which you can use to progress through increasingly difficult enemies. Beyond that there isn’t much more than fighting enemies and then occasionally fighting bosses. Despite being fairly simple, it is a good time sink, especially if you want an experience that is both familiar and different. 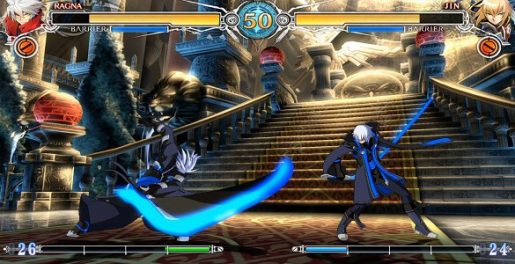 Speed star offers the same type of experience. Instead of seeing how quickly you can defeat a set number of foes, you’re given a finite amount of time and your performance dictates how much additional time you receive. This makes the mode less accessible, while still offering an experience that is thrilling regardless of skill level.

Not much has changed in terms of fighters. All your favorites are included, along with a couple new faces. Sadly, due to the roster growing over the years, some of the fighters don’t offer much of a new experience, though Nine is an interesting fighter. She is a tricky fighter that has flashy moves and requires craft gameplay and positioning to be proficient with. Newcomers will have a difficult time with her, but she is different enough to leave a distinct impression.

BlazBlue: Central Fiction is another solid entry in the BlazBlue series. The characters act and perform like you’d expect, with the same balance being present. The story, which takes up the bulk of the offline experience, is quite interesting and is sure to leave you on the edge of your seat. Sure the other modes could be a little better and the new fighters a little more different, but besides that you have a solid experience that fighting game fans are sure to enjoy.

[Editor’s Note: BlazBlue: Central Fiction was reviewed on PS4 platform. The game was provided to us by the publisher for review purposes.]