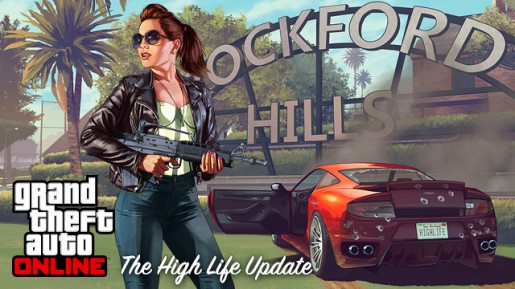 The much anticipated High Life Update for Grand Theft Auto Online is now available for download.

The update adds a slew of new items to purchase, key ones being the five new apartments; Eclipse Towers in Vinewood, Richards Majestic in Rockford Hills, Tinsel Towers in Little Seoul, 4 Integrity Way in Downtown, and Del Perro Heights near the beach. You also now have the ability to store vehicles across two apartment garages (yes that essentially means you can own two apartments now, celebrate your riches!).

It also adds some new vehicles to add to your newly acquired garage space the Enus Huntley S (SUV), Dewbauchee Massacro (Sports), Pegassi Zentorno (Super) and Dinka Thrust (Motorcycle) are all available to purchase from Legendary Motorsport. It even adds the Bullpup Rifle which is purchasable at any Ammunation.

It doesn’t stop there, here are some new missions available with the update; contact missions and Land races.

Finally the wonderful folks at Rockstar Games have even added some features to the game & fixes. Check out the list below:

With the new Mental State stat, we are keeping track of your behavior. If you seem to enjoy attacking pedestrians and terrorizing other players, then your blip will start to turn red on other players’ maps. The redder the blip, the more psychotic the player; the whiter the blip, the friendlier they are.
The actions you take will have varying effects on your Mental State. For example, killing another player will turn your blip red faster than blowing up a car or taking out a random pedestrian. Killing a player with a white blip will push your Mental State into the red faster than killing more psycho players, while taking out full-on psycho players won’t cause your own Mental State stat to increase at all.
Mental state also factors into matchmaking – you’ll automatically join Freemode sessions containing people more ‘compatible’ with your play style, and if a red-blipped lunatic does enter your session, you at least have fair warning!

Non-Contact Races are now an option. When you create a Non-Contact race, other racers appear as semi-transparent and collisions with them are disabled (although you’ll still be able to collide with non-player traffic, structures and other scenery).

You now have the option to Friend Spectate – if you and a friend are in separate GTA Online sessions you can now choose to spectate that player through the Friends menu.

New player toasts and celebrations: Switch out your salute for jazz hands, a face palm, a slow clap and more. There are also paired toasts for celebrating with a friend, like a backslap, or a solid, manly handshake.

New clothing: It can be hard work finding the perfect ensemble to really make your character stand out, so we’ve done some of the hard work for you and put together some stylish outfits. Hit the town, dressed to the nines with an array of classy new suit sets available with a pret-a-porter jacket, trousers, suit vest and shoes.

Based on feedback from the stunting community, the changes to bike physics in a recent Title Update have been reverted.

Fixed an exploit where players were able to shoot in their garages.

Fixed an issue where players would occasionally not be able to reclaim a vehicle despite it being insured.

Fixed an issue where the water cannon on the Fire Truck did not work correctly.

Previous article Final Fantasy Agito Gets New Videos Via Famitsu
Next article Wolfenstein: The New Order Could Be Around 20 Hours Long