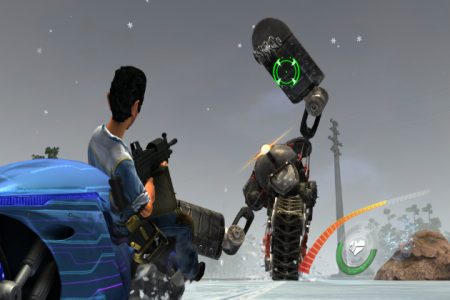 When the henchmen from Big Arms come to get you, that is when you can bring out the firepower. I.R.I.S has machine guns, rockets, bombs and her martial art skills that you can use to dispose of the many enemies that arrive. She can even use Pablo as a boomerang to attack other enemies too. When you end each level, you will earn points so that you can upgrade I.R.I.S’ health, power, guns and abilities.

Each level has three acts each and the third act usually ends in a boss battle. The boss battles could have been cool, but they drag on too long and feel very repetitive. This is mainly because you are repeating the same actions over and over again. I remember I had to shoot the weak spots on a huge robot more than five times before the damn thing died. It isn’t just the boss battles, but I would say most of the gameplay is repetitive in itself anyway.

One of the most shocking things about LocoCycle is that the game is a huge 11GB download. I was surprised about this considering how cruddy the graphics were. Not to mention the game is short featuring around only five or six levels. I’m guessing the only reason the game is 11GB is because of the aforementioned cutscenes. They are shot in full HD, and are pretty long.

If there is one good thing to say about LocoCycle is that some of the characters are likable. Pablo is a funny main character and I do like that he speaks in Spanish the whole time. I.R.I.S herself is pretty cool, even though she is clueless that Pablo is in clear danger every time she drives. The best character however is I.R.I.S’ main rival called SPIKE. SPIKE is an evil motorcycle that is voiced brilliantly by Terminator 2’s Robert Patrick. Every time he’s in the game, LocoCycle becomes slightly more interesting. 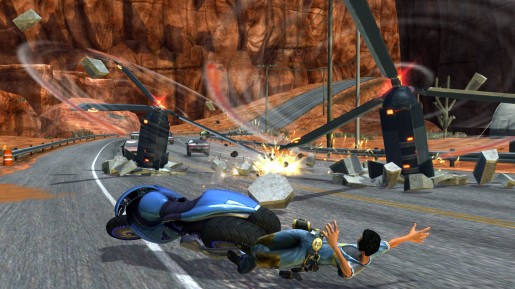 Another thing I would praise about LocoCycle is its effort to be different. Sure it’s a bad game overall, but I do admire the effort that has been made in order to make LocoCycle different from any other game out there. LocoCycle is not just another shooting or sports game that you often see being released these days.

The game is very short too and it’s not worth playing for more than one time. There is no incentive for you to replay the levels again, unless you think the gameplay is fun to experience a second time. I don’t think many people would want to play at all because of how bad it is.

If you see LocoCycle on the Xbox Live Marketplace, don’t be tempted to spend your hard earned money on it. The game looks like an average Xbox/PS2 video game at best and the gameplay is very boring and repetitive. The cutscenes are hard to watch too with its bad acting and cheesy dialogue. The only redeeming qualities are the main characters and the game’s creativity, but the overall game ruins what could have been a more fun experience. LocoCycle may go down as being one of the worst launch titles ever.

[Editor’s Note: LocoCycle was reviewed on the Xbox One platform. The game was provided to us by the publisher for review purposes.]

LocoCycle Review , 6.0 out of 10 based on 1 rating
2 of 2
Previous article Capcom Promises Deep Down Will Be Released Very Soon
Next article Hello Games Thanks Gamers For Flood Support