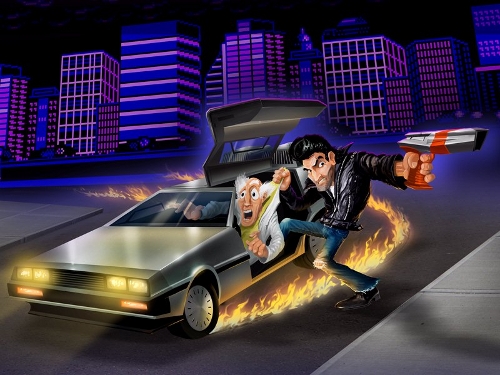 Recently we’ve seen a number of games try to recapture the past, but many of them fall short. Sure some like Spelunker HD got it right, though many focused on one element and failed at the rest. Following in this trend we have Retro City Rampage, which tries to combine a large open world with 8 bit graphics. With so many things that can go wrong, will Retro City Rampage appeal to older gamers or is it completely dependent on the gimmicks?

Let’s check out what’s HOT and what’s NOT in our review of Retro City Rampage.

References… EVERYWHERE
One of the best things about Retro City Rampage, is that there are countless throwbacks to the 80’s and 90’s. These can range from power ups, like you get jetpack, which gives you a raccoon tail and flying looks similar to Raccoon Mario, to just something in the background like the TARDIS. Best of all, these references aren’t constantly jammed down your throat like in Neptunia.

To give you an idea, one of the story villains is a guy named Dr. Von Buttnick, who looks and is clearly a reference to Dr. Ivo Robotnik, but the game doesn’t constantly make the link more and more apparent. As mentioned above, the TARDIS isn’t named, you don’t fight a guy named “The Doctor” or anything else that would link it to Doctor Who, you just either know it or not. While this is true for the vast majority of the references, there are some that make the reference more apparent. For instance, most of the story is a callback to Back to the Future, so that one is more obvious than others. Another big one is Batman, though none of these go to excessive lengths to make the reference.

Lets Go on a RAMPAGE!
Despite looking like a simple game, Retro City Rampage is actually a lot of fun to mess with. There are around 20 different weapons you can use and the ability steal any type of vehicle (up to and including a giant monkey) to cause a rampage around town. As you kill people or destroy vehicles, you will score points, get cash and earn multiplier bonuses, but it will also cause the Police to hunt you down. This will give you the choice to face them and raise your alert level or you can attempt to out run them and hide. Typically you can lose them in a building, though you will still need to stop anyone that is currently following you. While this might sound boring here, it’s actually a lot of fun running everything over with a tank or just trying to do everything, like unlocking all 103 different styles for your character.

Amazing Detail
At first glance Retro City Rampage looks incredibly basic, but it has impressive sprite work. As you cruse through the town or progress in the story, you will see a number of different and complex designs around the city. This might be a salon with a picture of a guy in a mullet or just the sheer amount of variety. What I was particularly impressed with was how most of the references were instantly recognizable. Like when I was doing the Biffman mission, I instantly noticed his car was designed to look like the Adam West (Batman) Batmobile, which should give you an idea of the dedication that went into even the small elements of this game.