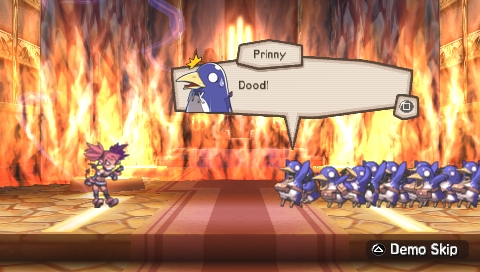 Nippon Ichi is best known for its Disgaea franchise.  Arguably, the best known characters from that series are the Prinnies, explosively volatile penguins that house the souls of criminals.  So popular are these strangely adorable creatures is that they’ve been able to get their own series of games.  The latest entry, Prinny 2: Dawn of Operation Panties, Dood! is a side-scrolling hack-&-slasher that stars a Prinny on the search for Lord Etna’s underwear, stolen by a thief from her lair.  He has only a couple of hours to find the stolen goods, else he and his brethren become targets of Etna’s wrath.  Sounds like fun times right?  No not really, but let’s start with something positive at least.

Presentation
Prinnies are always funny because even at the center of their own game, they’re still the victims of comedic circumstances.  While the Prinnies are doing whatever menial tasks they’re doing, they find out someone has stolen Etna’s panties and she’s not too happy about.  She picks a random Prinny from the flock and commands him to find both it and the culprit.  If he doesn’t do so in time, he and his fellow doods can expect a world of hurt from their sadistic master.  A unique and very humorous premise.  The fully-voiced English dialogue is funny and sport that charm fans love with Prinnies depressed at life which clashes with Etna’s cheerful attitude.  Flonne also makes an appearance and is still as adorable as ever.  Sadly there’s no option for Japanese audio but the English VA’s do an excellent job.

The world is populated by NIS staples like succubi, ghosts, ghouls and other fantastic creatures which are nicely rendered in 2D to fit the PSP.  Each stage has its own theme and the music has the tinge of upbeat Halloween music; if you’ve played any of the Disgaea games – there’s no excuse to not have – then you should be familiar with tunes that welcome you back to this universe. 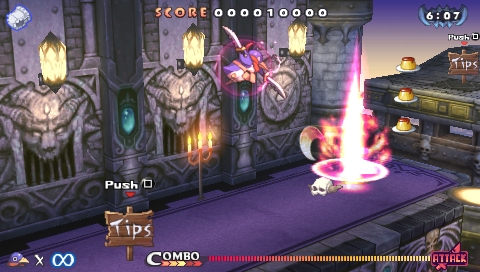 Frustration
Sigh.  Where to begin?  Simply put, you will spend more time yelling at this game than having fun with it.  Gameplay is basic moving left and right, attacking enemies, and platforming.  The problems found in platforming are major to say the least.  Jumping is way too unforgiving despite having double-jump at the Prinny’s disposal.  You jump straight up and/or at a slight angle to either side with no ability to finesse the jump once the command is executed.  You’ll all too easily find yourself jumping stiffly into an enemy or obstacle which will, most of the time, lead to your death one way or another.

You’ll encounter chokepoints filled with enemies and traps that force you into using up a life or two just to get past.  There will be enemies that you can’t kill by normal means unless you stomp them but this will leave you extremely vulnerable once executed and has the side effect of acting like an even more problematic jump because odds are you’ll be jumping into other enemies.  Beyond that there are enemies that can’t be killed at all and will follow and harass you as you try to make your way from one section to another.  Oh and if you get hit mid-jump, the Prinny becomes stunned and will not recover unless it hits solid ground.  There will be many occasions in which you’ll get hit and fall to your death and be forced to start over at the nearest checkpoint (“nearest” being a relative term most likely not in your favor).  Now picture that happening far into a platforming section with enemies you can’t avoid or even kill over and over again and you’ll understand the anger.

Shallow gameplay
As mentioned earlier you move left & right, attack enemies, and do some platforming.  That’s pretty much it.  You get a limited set of attacks like slashes, jump slashes, dashing, and a stomp move that stuns enemies for a short period of time.  Combining attacks will fill a combo meter that augments attacks for improved damage but it doesn’t last very long and is a barely noticeable advantage in the long run.  Boss fights feel like common enemy encounters that have been elongated and outstay their welcome very quickly.  This combined with the problems found in the previous section make for some easily forgettable gaming.

I’ve never been so frustrated with a PSP title as much as I’ve been with Prinny 2: Dawn of Operation Panties, Dood! The NIS setting, humor, and characters are overshadowed to the point of non-existence with the lack of depth in gameplay and the infuriating problems found in platforming and certain design choices.  Even if you’re a masochist you’d be doing yourself a favor by steering away from this game.  There are other more rewarding titles that have more content to them and would actually be worth your time.

[Editor’s Note: Prinny 2: Dawn of Operation Panties, Dood! was reviewed on the PSP platform. The game was provided to us by the publisher for review purposes.]