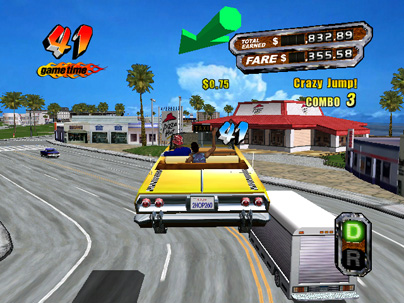 Crazy Taxi is another old classic being released on the PlayStation Network and Xbox LIVE Marketplace. The original game was released in the arcades way back in 1999 before eventually being ported to the Dreamcast, PS2 and Gamecube.

Crazy Taxi was an arcade classic and the console ports were none too shabby either. But how does Crazy Taxi fare in today’s market? Is it still playable after all these years? Have the graphics been revamped? Answers to these questions and more as we take a look at the HOTs and NOTs of Crazy Taxi.

Soundtrack
Although this version of Crazy Taxi does not feature The Offspring and Bad Religion, it still has a pretty decent soundtrack. The indie-rock tunes are appropriate for a game like this and really adds to the overall atmosphere of fast frantic driving. They are nice alternatives

Short, Cheap and Fun
There’s nothing complicated about a game like Crazy Taxi. Your main objective is to drive as many passengers as possible to their desired locations before your time runs out – simple as that. There’s no back story all long cutscenes to wade through. It’s just you, your taxi and the passengers as you drive as fast as possible to your location. 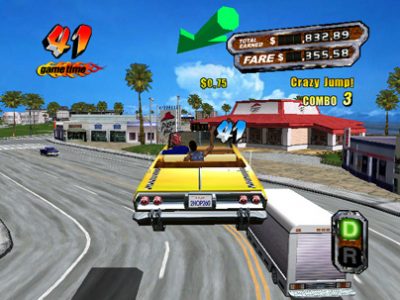 There are also different modes of gameplay. There’s the arcade and original modes as well as the challenge mode (called Crazy Box). The challenge mode allows you to tackle different objectives such as driving without falling into the water or trying to pick up as many passengers as possible before the time runs out.

Graphics
Crazy Taxi sadly looks horribly outdated. This is a direct port of the original Dreamcast game and Sega made no efforts in revamping its look. The textures look rough and the character models are laughably ugly. Everything looks worse if you’re playing on a widescreen television so it’s advisable that you play on a standard definition TV or switch the game to its original aspect ratio.

Not Much Longevity
The game is only good to play for about five minutes. There are only two cities that you will get to drive in and that’s about it. You don’t have the opportunity to unlock more cities even if you get a good high score. Once you play through all the challenges there’s little incentive for you to play this game again; unless you’re wanting to get a higher score to post on the online leaderboard.

Clunky Physics
By no means do I expect a game of this nature to have realistic driving physics but the way the car moves in this game is very clunky and everything feels heavy and junky. It very hard to manoeuvre your car while avoiding traffic at times and often your car stalls after you’ve hit the brakes. Even when you’re jumping off a ramp the car does not jump that far. The game may have been playing at the arcades all those years ago but everything feels very outdated now.

Dumb A.I.
The A.I. in this game can be very stupid. You have to park exactly under their feet in order for them to consider walking into your taxi. I remember being a few meters short of my target and I had to reverse just to pick them up. That may sound normal, but in Crazy Taxi, this sort of thing shaves a lot of your precious time on the clock.

No More Licensed Locations
Want a ride to KFC? Sure, I can take you there. Not in this version of Crazy Taxi! Sadly, licensed locales like the aforementioned KFC are no longer featured. They have been replaced with cheap knock-off locations. Some may say that no product placement is a good thing, but I still miss the real-life location as it made the game feel more authentic.

Let’s say Crazy Taxi WAS a good game ten years ago. The game has not aged well, as the graphics and gameplay are horribly outdated now. Fans of the game will miss the sounds of The Offspring and Bad Religion but the new soundtrack is not half bad. The short span of gameplay is fun but only for like 2 hours or so. Once you’ve played through all the modes, I don’t think you’ll be playing the game ever again. Sadly, only nostalgia buffs will seek any long-term enjoyment out of Crazy Taxi.

[Editor’s Note: Crazy Taxi was reviewed on a Xbox 360 platform. The game was provided to us by publisher for review purposes.]