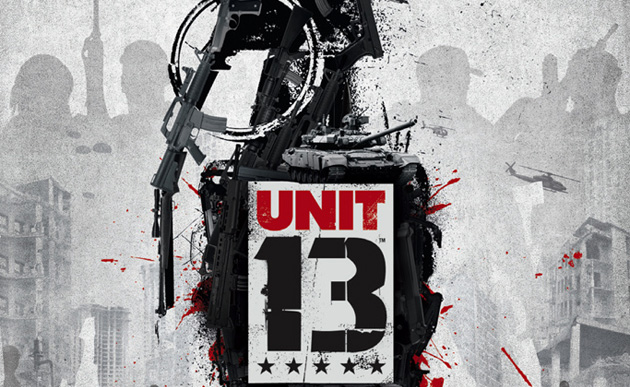 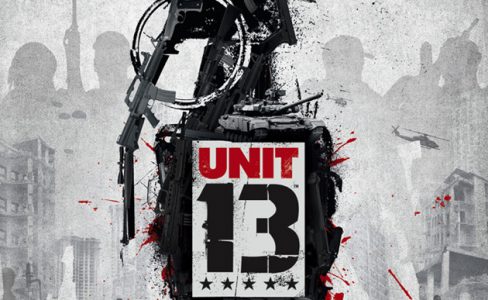 The developers of the critically acclaimed SOCOM franchise are looking to bring a similar third-person shooter experience to Sony’s new handheld with their latest game, Unit 13. Taking advantage of the PlayStation Vita’s dual analog sticks, Zipper Interactive promises to deliver a true cover-based console shooter experience on the portable device. With Unit 13 being Vita’s first shooter, does it meet all of the high expectations set by this impressive handheld?

Let’s take a look on what’s HOT and what’s NOT in our Unit 13 review.

Plays Perfect on the PlayStation Vita
Since the PSP has only one analog stick, shooter shooter games never really worked well on it. The end result was intense and chaotic, and not in the good way. Using the face buttons to look around and adjust the camera is easily one of the worst control layouts ever made for portable shooter games — look at games like Resistance Retribution — but without a second analog stick, other options were nonexistent. With the PlayStation Vita’s second analog stick, Zipper Interactive’s Unit 13 was quick to take advantage of it, finally providing players with the portable control scheme that was only a dream in years past. 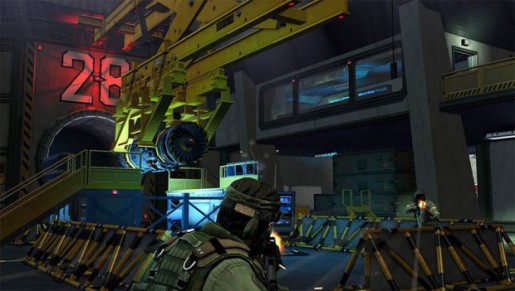 The controls in Unit 13 are extremely solid. As you would imagine, it feel so right to have the right analog stick look around and the left one move your character. This helps everything synchronize well, especially during the game’s intense moments. No longer being plagued by face button aiming, the Vita can provide the definitive shooter experience, which is what Unit 13 aims to achieve. Those who played the demo that was released a couple of weeks ago, you might have noticed that the game controls very well while aiming and shooting with the L and R shoulder buttons. The layout provides an experience that should come off as very familiar and easy to jump into for.

Good Blend of Touch Controls
Along with the phenomenal twin-stick shooting controls, the touch screen is utilized for certain situations. Before I started playing Unit 13, I was under the impression that using the touch screen would hinder the overall experience, especially during the intense moments. I couldn’t have been more wrong. Even when the action kicks it up a notch, the touch-screen icon is easily accessible. You’ll find this icon just right beside the physical buttons on either side of the screen. Whenever you pick something up or reload a weapon, you have the option to touch the corresponding icon on the screen. 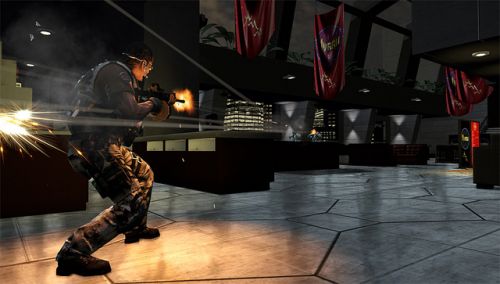 Bite-Sized Missions On-The-Go
Instead of including the traditional campaign mode, Unit 13 offers bite-sized missions that can be done on-the-go. With 36 missions available, players will experience various missions types and objectives that vary from neutralizing the enemy in an area to picking up scattered intel. Each mission includes a different game type where it will either be Direct Action (a mission with simple objectives and straight mission goal), Deadline (a mission with a time limit), Covert (a stealth mission type that requires a silent approach) and finally Elite (a standard mission without regenerating health). Once you’ve worked through those modes, you can try each mission with the “Dynamic” variation. Dynamic missions are exactly what they sound like. Mission objectives will be randomly assigned at the beginning of the mission, ensuring that the experience is fresh and unpredictable each time you start up a level. These are the main game types that you will be able to play throughout Unit 13 and a majority of them are exhilarating and challenging.

Once you’re in the game, that SOCOM feeling will start to set in. Every kill performed and objective completed will award points. The whole point of having these credits is to move up the leaderboards. Depending on how you take down the opposition or how fast a mission is completed, a certain of amount of points will be given depending on the quality of your performance. These scores will be posted to the leaderboards, where you can check how you stack up against just friends or the entire world. In addition to the score given at the end of each mission, you will also be given experience points that the character uses to level up. Rise through the levels and more weapons and attachments will become available. There are even certain pieces of equipment that can be unlocked by one character but then be used by all characters. For example, the silencer is unlocked by the specialist and, once obtained, can be selected by the rest of the operatives.

With every successfully completed mission, players will earn stars which grade their performance. These are more than just bragging rights. With the right amount of stars, important figures will be unlocked in High Value Target mode. This is where you’ll be targeting the leaders of terrorists around the world. At first, it will be impossible to play through the High Value Target mode as you will be without the appropriate amount of stars. This provides the incentive to play through the solo missions for a while. However, once you have that stars, you then can enjoy High Value Target. Be warned, these provide a bigger challenge than the normal missions.

In addition to High Value Targets, another mode that is available within the game is Daily Challenges. Just what the name implies, Daily Challenges is an ever-changing day-to-day challenge where players battle it out for the top score and number one spot on the leaderboards. When you’re doing Daily Challenges, you only have one try, so make it count! The challenges that appear each day seem to be based on the many missions available in the Solo mission mode. The challenge is only available once a day and once you’re done, you will have to wait until the next day for a new one. If you haven’t noticed yet, scores are an integral part to Unit 13’s structure.

Co-Op Missions Are Fun
The selling point of Unit 13 is the online multiplayer co-op where you can team up with one other person to finish a mission together. While I personally have not seen a handheld game with impressive online, I was surprised to see Unit 13 pull it off so well. The online experience on the PlayStation Vita is smooth and thanks to the microphone that is built into the handheld, it makes it easier to coordinate a plan with your partner during the mission. No longer will players be paired with “mutes” without a headset. Simply play the game and once the mission starts, you can begin chatting with one another.

Solid Visuals but Repetitive Environments
For a Vita title, Unit 13 delivers graphics that showcases what the Vita can do. Comparing it to console shooters, the visuals are obviously not on par, but it’s a solid looking title. The primary downfall are the frame rate problems. Not to mention that deja vu can set in between missions as it begins to feel like you’re in the same area all too often. If you’re expecting to see a plethora of varied and distinctive environments, then you will be disappointed. The maps that are available within the game are limited and going through the area over and over again, even with different missions, can get tiring at times.

No Invite System
When it comes to an online multiplayer, it works best if the game has a lobby and the ability to invite your friends. In Unit 13, only one of these features are present. The ability to invite friends is absent which means your friend will have to search for your match manually. I find it annoying that I have to go through different steps in order to play a game with my friend. Without an invite system, those who are thinking of playing cooperatively must create a private much and make sure the person they wish to play with is on their friendlist, otherwise you won’t see them in the lobby when performing a search. Hopefully in the future, Zipper Interactive will add some sort of invite system to make it easier for players to jump into a game with their friends.

No Story Mode
Those looking for a strong campaign mode should look elsewhere. Actually, if you’re interested in a story at all, you’ll be disappointed. It doesn’t really exist. None of the available missions contain anything that could really be considered a story. It’s like playing a bunch of Navy Seal missions without much context. For a shooter game like Unit 13, I was expecting for a full fledged campaign mode, but seeing how this game seems to be a trial for the PlayStation Vita, hopefully Zipper Interactive’s next Vita installment (assuming there is one) will be more fleshed out. 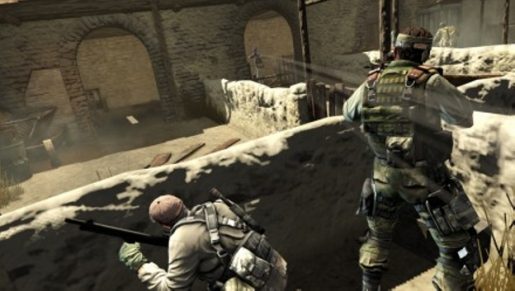 Lack in Variety of Game Types
Another problem with Unit 13 is the lack of variety in game types. While the handfull of game modes that Unit 13 has are definitely fun, I feel that it could have used a few more choices. It would be nice to see more modes and mission types reach Unit 13 via DLC, but for now this is what you get. Also, it must be mentioned that this is Zipper Interactive. We’ve seen what they can do with competitive multiplayer in their SOCOM games. Unit 13 has the tight controls and addictive gameplay necessary for a great competitve mode. It really feels like a missed opportunity.

In the end, Unit 13 is a big surprise since playing a shooter game has never felt so right on a handheld. This is thanks to the two analog stick on the PlayStation Vita. The game is solid when it comes to the action it delivers, but the game falls short when it comes to the story, the variety of game modes and the repetitive nature of the environments. Regardless, Unit 13 is a prime example that shooter games will now feel great playing on the PlayStation Vita. Unit 13 is sure to be the shooter game of choice and one gamers will be playing for a long time, but once more shooter games make their way out on the Vita, Unit 13 may not look as appealing.

[Editor’s Note: Unit 13 was reviewed on the PlayStation Vita. The game was provided to us by the publisher for review purposes.]