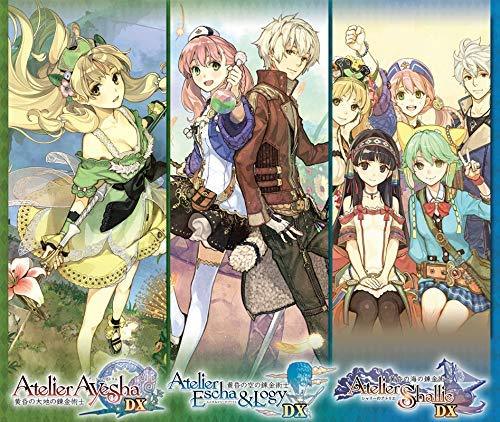 For years Atelier has consistently released simple, but cute RPGs centered around optimistic characters, hopeful stories, and plots that run against norms associated with the genre. With so many releases, it can be hard to keep up and can make following them all rather difficult. This is where the updated ports are really useful. With another chance to experience some interesting adventure, fans and newcomers alike can see what a good number of players loved on the PlayStation 3 and Vita. With the previous collection doing fairly well, now Atelier Dusk Trilogy Deluxe Pack brings the next arc for players to enjoy but is it as good as the first or are you better off skipping?

This pack includes the three titles that make up the Dusk/Twilight arc, which include Atelier Ayesha: The Alchemist of Dusk, Escha & Logy: Alchemists of the Dusk Sky and finally Atelier Shallie: Alchemist of the Dusk Sea. Each title goes in a linear order, taking place after the starting point of the previous one, giving their own adventure for players to experience.

In Atelier Ayesha: The Alchemist of Dusk, you play as Ayesha on a quest to find her thought to be deceased sister, Nio. After getting some clues, Ayesha gets an idea of how to potentially find her sister and depending on your choices a number of different outcomes will occur.

Following that is Escha & Logy: Alchemists of the Dusk Sky, which follows the pair mentioned in the title. Here you’re in the Twilight Land, a faraway place that use to thrive through forgotten art of alchemy, which is needed to prevent an upcoming disaster. Most of your time will be spent building towards a grand adventure, though you might find some familiar faces along the way.

For the final adventure, Atelier Shallie: Alchemist of the Dusk Sea, comes down to two storylines. One where you work on your alchemy to save your village from a lack of water and the negative impacts it has on resources and, more importantly, solve the mysteries presented in previous titles. It marks an interesting end to the adventure and one that should be played in order if you want to get the full experience.

While three games are included and they have their own individual quirks that present themselves in the way of mechanics, the core gameplay experience remains relatively unchanged. For better or worse, Atelier comes down to time management and slowly building towards something greater through trials and problems you need to solve with alchemy.

Sometimes problems can be solved with as little as resources found on the ground, through mining or other activities that may or may not be worth the time. Along with that, there are quests, optional tasks and more that you can undertake to bring joy and hope to those you run across. This is an experience where you ultimately want to help everyone, not for the experience or rewards, as much as how it impacts your journey from novice to experienced professional. While gathering there are also enemies you can encounter.

For the most part, this is a fairly straightforward turn-based RPG. Every player and monster gets a turn, you may attack, defend, use items or magic and based off your luck and strategy you may or may not make it out alive. Like all Atelier games, your foes start off cute and non-threatening ultimately building to bigger and more dangerous threats. Those looking for a more robust combat system might be underwhelmed, though it’s good enough to have fun. Especially if you want to see all the colorful and cute attacks.

Given these are ports, the titles have been enhanced and while they look pretty good, they’re not the most optimized titles around. Thankfully, the lack of intense action prevents this from being anything more than a quirk that may or may not take you out of the moment. It isn’t like every section will stutter or lag, though it wasn’t entirely uncommon either. That being said, most of it occurred during more demanding parts, such as a large town or rapidly moving through a location, over basic things like fighting puni.

Where these adventures find a lot of value is actually the amount of time it takes to fully experience everything. With the rather modest cost of entry, even for the full collection, you can easily get a couple of hundred hours of crafting, discovery and wow that you’d be hard-pressed to find in another franchise.

Despite not being the franchises best, Atelier Dusk Trilogy Deluxe Pack is still an extremely enjoyable experience. This adventure starts with whimsy and ends in a way that brings the seemingly random stuff together. Toss in some cute enemies, multiple endings, plenty to see and do and it’s easy to have fun with it. Sure, none of them really break the mold or offer much different from previous adventure but for fans or someone looking for a different kind of RPG, it’s worth, if nothing else, check out.

[Editor’s Note: Atelier Dusk Trilogy Deluxe Pack was reviewed on PS4 platform. The game was provided to us by the publisher for review purposes.]