Today, CCP Remnant had the chance to speak with the PlaystationBlog about the Dropsuits in DUST 514. Here’s the entire article for your delight.

How do you build a better warrior? Militaries have tried for centuries to answer that question, but you’ll be able to figure it out for yourself when DUST 514 launches next year. Infantry dropsuits are designed to protect and sustain the wearer in even the harshest environments. Different dropsuits offer specific bonuses to speed, mobility, defense and configurability. Like starships and planetary vehicles, dropsuits come in a variety of shapes and sizes, each with a unique slot configuration and powergrid (PG) and CPU that inform the decisions you make when customizing your chosen dropsuit. 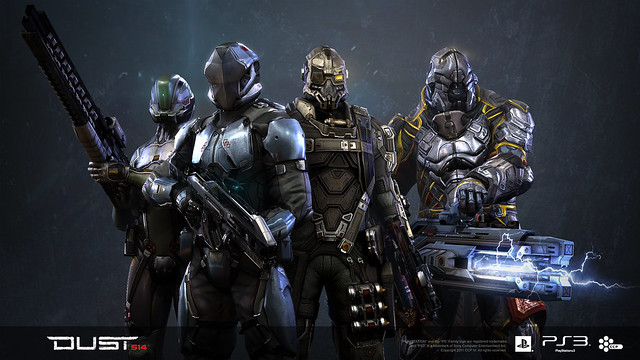 The number and type of slots determine the modules (interchangeable hardware components that enhance or otherwise alter the functionality of the dropsuit), weapons, and equipment you can fit. The slot types available on dropsuits are as follows:

The three weapon slots – Light, Heavy, and Sidearm – cascade. That is, a Heavy slot can be fitted with a Sidearm, Light or Heavy weapon and, similarly, a Light slot can be fitted with a Light or Sidearm weapon. The high and low slots are module slots, each used for particular types of modules. Equipment slots allow the dropsuit to carry deployable or handheld equipment such as scanners, nanohives, drop uplinks, repair tools and more that will be covered in a future blog. Lastly, grenade slots determine the capacity (i.e. how many you can carry) of the grenade types – Locus, AV, EMP – fitted.

The intrinsic benefits of your chosen suit define, in part, the type of role you wish to fulfill on the battlefield but ultimately it’s how you choose to fit the suit that determines what it is capable of. Do you play to its strengths or do you surprise the enemy with an unconventional, risky fit? The choice is yours.

Dropsuits are classified as Standard, Advanced, and Prototype, each requiring specific skills to be trained before they can be used. Today, we’re going to take a look at two standard dropsuits: the Assault and Heavy.

The Caldari dropsuit design and aesthetic philosophy is heavily influenced by the culture’s origins on brutally frigid home worlds, dismissing stylistic notions in exchange for the ruthless, bare-minimum functionality requirements needed to keep a soldier alive. As such, the Caldari suit is notoriously uncomfortable and outright ungainly in some instances, yet remains in high demand due to its remarkable resilience in smart battlefields. 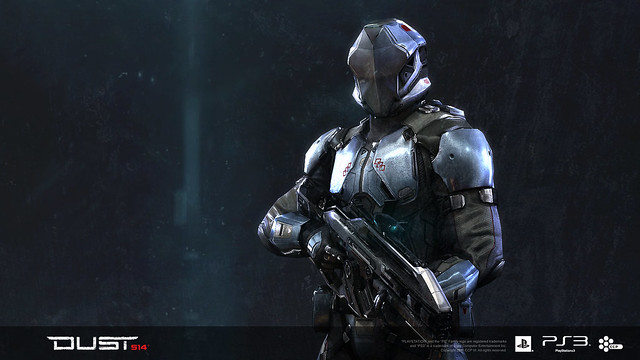 A flat-coil e5000 fifth generation fusion core runs up the inside of the back plate, powering the entire suit. Its output and heat buildup are controlled by a L2 “Gatekeeper” regulator conduit, which connects directly to the sensor system at the base of the neck. Every joint is reinforced with kinetic sensors and two-way, high torque servos to enhance the soldier’s strength, balance, and resistance to impact forces. The suit’s helmet has more integrated sensor, communication, targeting, and data processing systems than most civilian vehicles. Furthermore, every armor plate on the suit is energized to absorb the force of incoming plasma-based projectiles, neutralizing their ionization and reducing thermal damage.

Assault dropsuits are intended for standard combat operations or those in which the objectives are likely to change at a moment’s notice. Its ability to carry anything from small arms and explosives to heavy anti-vehicle munitions and deployable support gear makes it the most adaptable suit on the battlefield.

The look of this Amarrian suit has changed little since it was first created, due largely to the commonly held belief that its original form is immaculate; the perfect amalgam of science and religion. Aesthetics are as important as function, because to the Amarr, aesthetics are function. Enshrined within the armor, the wearer becomes a vessel, the embodiment of God’s will and an instrument of holy wrath, unmistakable, and feared, by all who look upon him. To the Amarr, the dropsuit itself is the weapon. 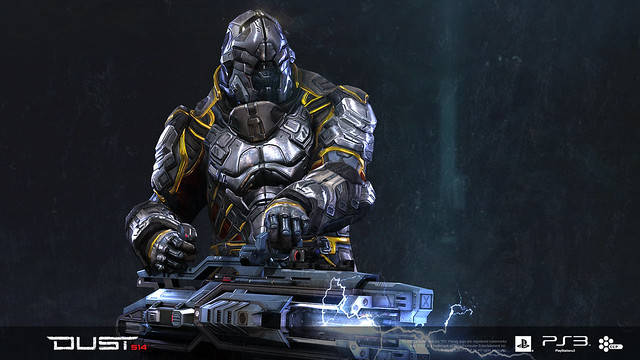 The Heavy dropsuit is a second-generation solution designed to withstand concentrated small arms fire and protect the wearer from the concussive, thermal, and impact forces of low-grade explosives. Additionally, its power-assisted exoskeleton facilitates usage of the heaviest caliber personal weapons.

Every vital area of the wearer is protected by 25mm composite ceramic shell or high tensile steel plates, layered with impact absorbing, compressed carbon latticework. A secondary thermal dispersion membrane channels excess heat away from the point of contact, distributing it over a larger surface area and thereby lessening the potential damage. Superconductive veins of hybrid silver coat the outer layers and connect every piece of the armor to a grounding heat sink, dampening the harmful effects of direct fire electromagnetic weaponry.

Heavy dropsuits lack the mobility of lighter suits, but this trade-off results in a defensive system that defies standard infantry conventions. No other classification of personal armor can claim to be able to stand toe-to-toe with enemy vehicles and survive. 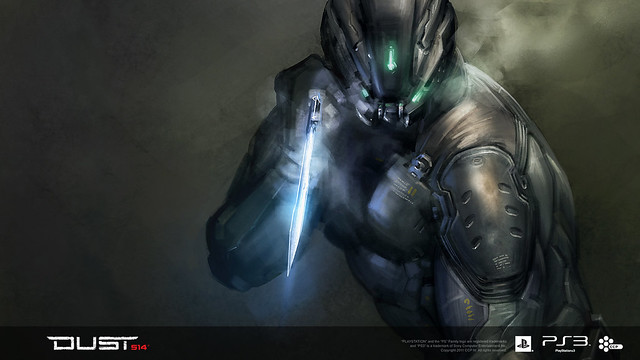 Even with just these two dropsuits, we can already see battlefield tactics starting to take shape. The Heavy can withstand a lot of punishment, but it has no equipment slots. Pairing it with another dropsuit capable of dropping ammunition replenishing nanohives or repairing from a distance will substantially increase the effectiveness of the Heavy. Alone, a Heavy could easily be outnumbered and outmaneuvered, but surrounded by allied Assault dropsuits it becomes a tank in every sense of the word, soaking up damage while the rest of the squad picks off the enemy.

Although formidable, the Heavy and Assault suits represent only one aspect of the battlefield eco-system. Sheer firepower will only get you so far. A smart squad will utilize the force multiplying support of the Logistics suit; the recon and electronic warfare specialties of the Scout; and all the modules and equipment they have at their disposal to become an unstoppable force. After all, one should never underestimate the value of a well-placed EMP grenade.