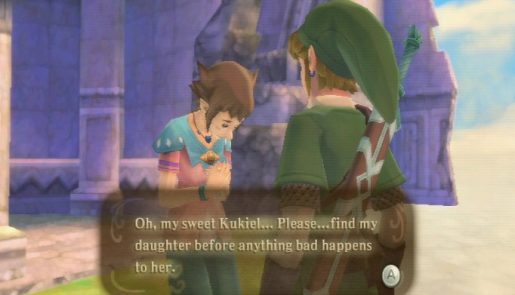 Once Link has defeated Ghirahim in the Skyview Temple and receives the Ruby Tablet, return to Skyloft and place the tablet at the base of the Giant statue of the Goddess in the room where Link got the Goddess Sword. As you leave this area you will run into a woman crying her eyes out. After speaking with her, Link will learn that her daughter, Kukiel, has gone missing. It is imperitive that you find Kukiel immediately as doing so will open many more Side Quests whose rewards will greatly aid Link on his journey.

Head toward the graveyard and be sure to speak with Orielle, the woman in red and white with long hair. She will inform you that Kukiel was playing in the graveyard when she went missing. Link will also learn of a crazy old man in the Lumpy Pumpkin, who’s been raving about monsters.

The Lumpy Pumpkin can be located on Pumpkin Landing to the South-East of Skyloft. Once you get there, talk to the old kook sitting at the table to learn how to open the secret passage in the graveyard: after nightfall (sleep in a bed “until night”) push the tombstone nearest the big tree, strike it, then push it back. Once the secret passage in open, walk inside and climb down the ladder. Continue down the narrow path to find a spooky old shack; inside you will find Kukiel and Batreaux.

Be sure to speak with both of them before leaving as speaking with Batreaux to start the Gratitude Cystals Side Quest (very important this early in the game). Next go to Kukiel’s house, it’s right by the bridge, and sleep here until morning. When you wake, speak with Kukiel’s mother to get five Gratitude Crystals. Take these crystals back to Batreaux to receive a Medium Wallet which can hold up to 500 rupees.