The launch of the PlayStation Move had a slow start due to the lack of games it has to offer. With EyePet, Sports Champion, and Start the Party out of the way from Sony’s hand, a brand new Move title is now upon us, but this time, it’s an on-rails shooter. Using the newly released Shooting Attachment for the the PlayStation Move, the Shoot is an all new action shooter for the PlayStation Move that will attempt to reinvent the genre thanks to motion sensing technology.

Motion Controls
What works best in The Shoot on the PlayStation Move is how accurate the shooting is. Thanks to the technology of the PlayStation Move hardware, the developer included some action within the game that will motivate players to move their body in dodging bullets in the game. From the boring point and shoot that players are used to in the arcades and the Nintendo Wii, The Shoot will have some segments in the game where players will have to participate and do body movements such as executing a stylish attack that lets the player do a 360 degree turn to perform the special attack. As with every other Move title, the Motion Controller must be calibrated every time the game is launched; it’s quick and painless!

Five Levels of Fun & Challenges
The Shoot takes place in a studio where there are five sets a player can play in Career mode. Each of the sets will have up to four to five scenes (levels) and each of them takes around five minutes to play. Every successful shot the player makes, gives them points and multipliers. The multipliers will keep increasing depending on the accuracy of the player. Hit one target, and the multiplier will go back to one. If Career mode isn’t in the player’s taste, a Challenge mode will be available for any player who wishes to tackle some of the hardest objectives offered in the game.

Shooting Attachment-Compatible
At a price of $19.99, a player can experience the intense shooting in The Shoot with the Shooting Attachment for the PlayStation Move. The shooting attachment is similar to what players have seen and done with the Nintendo Wii. It’s a simple plastic case that holds the Motion Controller and players can hold it as a gun. When using it, it feels more convincing in shooting and thanks to the precise tracking, it makes shooting a lot more fun and realistic.

Two Player Madness
To make the game even more fun, a friend who has another PlayStation Move controller can simply jump in and play the game. Players can do two player co-op or join in the challenges and compete with one another as they rack up the high scores in the game.

Just A Simple And Ordinary Shooter
The Shoot is not that different to any other on-rails shooter that players have seen. Comparing it to the on-rail shooters that the Nintendo Wii has, The Shoot is just like a test drive for Sony in testing out the genre for the PlayStation Move. The modes that the game has to offer is very common and players have seen it before in other games. 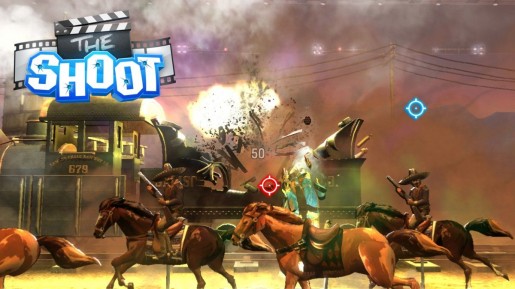